The Commonwealth of French Andromeda (French: Communauté des états français d'Andromède) is a federal presidential republic in the Andromeda Galaxy and a member of the French Colonial Empire. Officially proclaimed as a semi-sovereign state in 2803, the commonwealth's origins can be traced back to a number of French colonial waves in the 2730's, 2740's, and 2750's, creating eight distinct colonial states by 2750. These states, possessing their own mutually exclusive cultures, would expand outwards over the course of the century, eventually founding thirty states as part of a grander union. Separated from the mother country by millions of lightyears, they faced challenges, wars, and triumphs which cemented their identities as a set of independent, Andromeda-centric, and diverse peoples, identities which strongly inform relations between the Commonwealth and the Empire today.

In the 2790's, during heavy involvement in the Great Tyranny War, French Andromeda found itself reunited with its parent, the French Sixth Republic as the latter became increasingly able to project political and military power to other galaxies. Tensions flared under the surface, resulting in the election of arch-conservative David Fauvre to the presidency in 2795. French Andromedans feared the Maxime administration's policies which threatened to usurp power from the practically sovereign government of the colonies, and caused a serious split in loyalties between the mother country and a greater Andromedan identity. These concerns would be tabled with the onset of war with the Delpha Coalition of Planets in the early 2800's, but would violently resurface in 2802 when France surrendered. The Maxime administration was replaced by a pro-DCP, liberal, and unitary regime beholden to the newly-created Human Superstate, both of which saw French Andromeda as just another territory. The Fauvre administration clashed with these entities on many fronts, defending the imperial arrangement establish under Maxime against sweeping attempts to redefine it.

Independence and founding of the French Colonial Empire

Finally, an order from the Unification Council to disarm gave Fauvre the ammunition that he needed. On January 4, 2803, he masterminded the creation of the French Colonial Empire with Alexandre Valéry, Prime Minister during the Maxime administration, as Emperor. Most importantly, French Andromeda was now fully self-governing and sovereign under the constitution of the Empire. Ironically, it quickly began to assume the role of Imperial leader under the new regime, corralling France's other colonies into a multi-layered system of sovereignty with it placed near the top.

However, French Andromeda's stranglehold on imperial politics would fade as the Empire re-entered the war and found is agency and internal cohesion beset by foreign and domestic forces. Imperial power would be gradually transferred to the Emperor to the detriment of French Andromedan leadership. With 500 billion citizens, the Commonwealth remained the premier workhorse of the Empire, providing industry, talent, manpower, and political support without which the Empire would not have functioned.

The internal politics of the Commonwealth saw a pronounced shift during this period. While conservative politics on the French Andromedan stage had been dominated by a strong pro-Andromedan nationalist movement allergic to the Imperial politics of the mother country, a new strand of pro-French conservatism, referred to as Valérism, began to emerge. This movement which came to power in high offices in French Andromeda and the EMpire at large would rally significant portions of the electorate in favor of the Imperial structure, and of Emperor Alexandre's capable leadership. The Commonwealth, therefore, found itself integrated into a larger French colonial identity to the horror of French Andromedan nationalist politicians. The Valérist movement would give rise to Audric Davinion––former delegate to the Emergency Colonial Congress and governor of the Commonwealth of French Andromeda––as a serious contender for conservative leadership when campaign season began in 2804.

With the election fast-approaching, things did not seem so clear on the other side of the isle. Liberals were confused, disunited, and incapable of agreeing on a single agenda. Many fell back on the same lines about loyalty to tradition, local cultures, and the example of the mother country, which put them in the politically awkward position of supporting the French Republic and the Human Superstate by implication. Some dissented from the move towards the imperial system as undemocratic. Others opposed the war for a myriad of other reasons, often aligning themselves with the New Cyrannian Republic. Others still, most ironically, broke with liberal tradition and turned towards the Andromedan Galactic Commonwealth's position of neutrality for guidance. 2805 promised to be a disorderly and chaotic election. 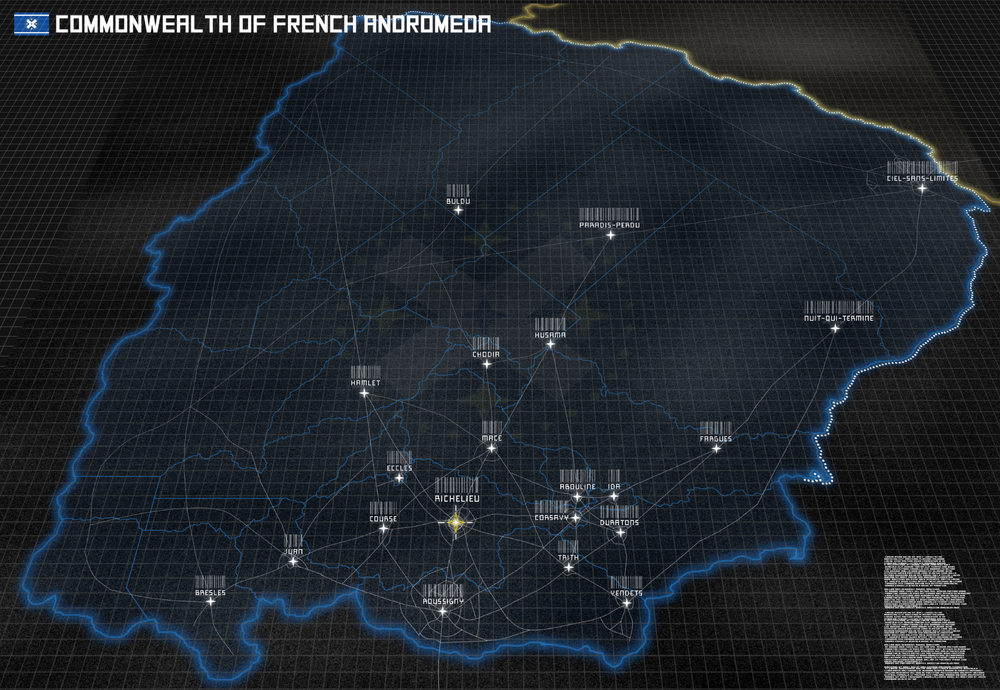 Ever since the 2760's, the politics of French Andromeda have been dominated by two major parties.

Finding their roots in Richelieu's upper class, the Conservatives historically championed an agenda based around "Andromedan" policies mean to strengthen the Commonwealth socially, politically, and militarily, both domestically and abroad. Attracted to increasing federal powers at the expense of the states, the Convservatives sought to create a common, irrevocable, and homogenous French Andromedan identity based around their own values and oriented towards the Andromeda Galaxy. Up until the 2800's, the Conservatives saw themselves as Andromedan first, French second, strongly looking to promote free market policies and engagement with neighbors in the Andromedan Galactic Commonwealth. Recently, these old guard Conservatives are being usurped by young guard Valérists who employ similar symbolism, rhetoric, and philosophy, except in support of the French Colonial Empire, the Emperor, and a common French identity.

The Social-Democrats, on the other hand, mirror the Parti Socialiste of France in theory, with many Andromedan quirks and realities thrown in. They are the left-leaning party of decentralized rule, state power, post-scarcity economics, and labor, fielding a much more introspective agenda with focus on domestic issues. In the 2790's, Social-Democratic leaders opportunistically sided with the Maxime Administration's attempts to initiate a rapprochement between France and its colony, seeing it as an opportunity to muddle the conservative agenda.

While the liberal opposition meekly supported the creation of the Human Superstate, public opinion weighed heavily in the favor of President David Fauvre when he declared the creation of the French Colonial Empire. Yet, an important shift began to occur in mid-2803. With the Fauvre Administration reaching the end of its second term and Emperor Alexandre rising to assume greater leadership in the Empire, a new strand of conservatism began to emerge, known as Valérism. This movement, rising to top positions within the Commonwealth and the French Colonial Empire, leveraged pro-Andromedan nationalistic symbols, imagery, and philosophy in support of the Emperor and the Imperial structure which French Andromeda purported to lead. Instead of orienting themselves the Andromeda Galaxy, Valérists championed a common French colonial identity, within which French Andromeda played a significant role.

Retrieved from "https://spore.fandom.com/wiki/Fiction:Commonwealth_of_French_Andromeda?oldid=705066"
Community content is available under CC-BY-SA unless otherwise noted.