Galactic, active only in the Cyrannus Galaxy

Remnant of the dreaded Cognatus Alliance

Large Military, though not on the scale of the Cognatus Alliance.

Worship of the Thirteenth Tribe

“I am very grateful for their aid. The Remnant have saved the day on many occasions”

The Cognatus Remnant was formed in the aftermath of the Intergalactic War, when the Oikoumene portal redirected the Cognatus Fleet from the Realm of the Gods directly into dangerous territory, as punishment for their genocidal campaign.

However, a group of Cognatus survived in the Cyrannus Galaxy, and continue their quest for more Atlantican artefacts to love and worship. They have since denounced their zealous ways and are now members in the Cyrandia Alliance, giving them a great influential place in the galaxy. The Cognatus Remnant was made up of many races, greatly increasing their growth and prosperity. The Remnant was eventually reformed into the Cognatus Empire during the Dark Times.

The Cognatus Alliance was very near to the complete destruction of the United Republic of Cyrannus in the final year of the Intergalactic War, making them retreat to their capital planets of the Twelve Colonies. However, even after defeating the Allies and sending them to their knees, the Cognatus began to excavate a portal, which was believed to lead to the Realm of the Gods. However, when the Cognatus fleet entered it, they were relocated by the Thirteenth Tribe to Catharsis territory, where they were infected with the purity virus.

However, a small group of Cognatus survived this and began to wonder the stars for other artefacts that would return them to their former glory. However their power was severally weakened and they began to question their capacity to wage war on the heretics of the URC and the Quadrants, and even their faith in the gods. They went into a seclusion of sorts from the galaxy, secretly and quietly searching for Atlantican artefacts. However, recently a beacon alerted them to one in Quadrant 82...

The leader of the Remnant, Voro Acetenus picked up the signal, which he recognised as a beacon of his gods, the Atlantica. He followed the beacon with a large fleet to the planet of its origins, unaware of its position as an important planet of Rambo Nation. When he fleet excited slipspace he was shocked to see that his former enemies had a large fleet over the planet's surface. Enraged, he immediately opened fire, disabling two Rambo ships and a single Venator-class Star Destroyer, but as the battle waged on, he began to take casualities, with one Cognatus Battlecruiser being destroyed by a Victory-class Star Destroyer. The heretics have grown in firepower it seems, he thought to himself.

However, eventually his fleet was victorious and although casualties were great on both sides, the Cyrandia evacuated as many citizens as possible and retreated. Voro Acetenus went down to the surface of the planet and retrieved the artefact, a great symbol of the might of the gods, yet now he wondered, how would the allies react.

As Voro explored the artefact, he learned that the gods were angry with the Intergalactic War and the crimes the Cognatus committed. After much research, he saw the errors of his way and when Empress Ramashe proposed a truce, he accepted and went to the meeting, where to his surprise, the two Cyrandia leaders were actually very honourable, something that Voro respects. The three leaders left the meeting in peace.

Voro Acetenus was overjoyed to see the two senators and hugged them honourably. However, within a few hours, the Cyrannian Grox once again attacked, which sadly meant that Voro was forced to evacuate his citizens and glass the capital planet. However, most of the Grox where destroyed and millions of citizens were saved. Now, the Cognatus were officially members in the Cyrandia. In the aftermath of this event, the Cognatus decided to show their loyalty by aiding the Rambo in the Third Battle of Karzamahri Nui. The Cognatus Fleet helped to destroy the Confederate fleet in the last moments of the battle, being praised by the citizens of Karzamahri Nui.

In the aftermath of the Galactic Empire of Cyrannus's formation, the Remnant was declared a traitor to the galaxy and were shunned by the galactic community. In the aftermath of this event, internal strife began to fester within the Remnant, with several Cognatusi hierarchs plotting against Voro Acetenus, believing that his leadership led the Remnant to ruin. Sending the Tra'ssahk, Garnossk, the plotters were successful in killing Voro. Now, the remaining hierarchs plan to turn the Remnant into a fully fledged civilization, like the Cognatus Alliance of old, eventually forming the Cognatus Empire.

Voro Acetenus is the leader of the Cognatus Remnant and represents it in political and military affairs. He was born on an unknown world at the height of the Cognatus' Alliance's reign and from a young age he was brought up as a fierce but honourable warrior. He soon joined the ranks of the Cognatus military and by the time of the Intergalactic War, he was the Fleet Master of the Fleet of Harmonious Rapture, one of the foremost bodies used in the extermination of the URC and the Rambo.

He was left in disarray when the Cognatus vanished, and took command of the forces that remained, forming the Remnant. After many years searching the galaxy for the artifacts of the gods of the Atlantica, he came across a signal which led him to Koerband, a colony of Rambo Nation, where to his surprise a large allied fleet awaited him. A short battle occured, but Voro was victorious and landed near to the artifact that sent the signal. He learned much about the Gods, and found that the genocide of the Rambo and the URC was in fact, a mistake. Soon afterward, Ramashe of Rambo Nation proposed a truce, which Voro accepted, and a meeting between Ramashe, Voro and President Apollo was called, which Voro attended. He enjoyed the meeting and learning more about all the cultures of the Cyrandia Alliance, before leaving in peace.

He later participated in the Cognatus joining the Cyrandia Alliance, but was forced to destroy the Capital Planet, to end their invasion. 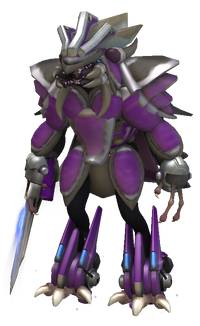 Thel'Vicliquam is the Captain of the Cognatus Assault Carrier the "Shadow of Liberty". Not much is known of his early history and he was first revealed and sighted during the early stages of the Intergalactic War. He seems to be over 228 years old. Thel 'Vicliquam is a dangerous and cunning Cognatus, responsible for the Cognatus assualt at Rambo Nation during the Intergalactic War. Afterwards he vanished and allied a dangerous Rambo Nation individual and later on re-emerged as once again the captain of the Shadow of Liberty, though now in service of the Cognatus Remnant. 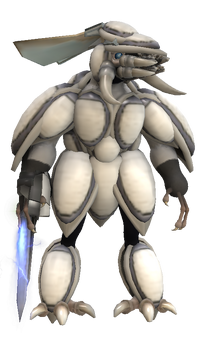 The Cognati Ultra Rtas'Shagili is the second in command of the Shadow of Liberty and a good friend of Thel'Vicliquam. Proudly of every decision he makes he follows Thel´Vicliquam everywhere, but he sometimes argues with him if he doesn't agree with him. Rtas'Shagili also has a tendacy to underestimate his enemies, which was later shown when the Cognatus Fleet had to withdraw from the Rambo Capitol Planet during the Final Battles of the Intergalactic War.

He later had to face the fact he left his captain behind, but was not punished. He remained an Ultra and is still second in command of the Shadow of Liberty.

Cognati, the founding members of the Cognatus Alliance and by extension, the Cognatus Remnant. They have begun to see the errors of their ways and now treat those below them much fairer. They religiously pursue Thirteenth Tribe artefacts and are still the political and military leaders of the Remnant.

The Vevilog, also known as Defiler, is the most common place being in the Cognatus Remnant, as it was in the Cognatus Alliance before it. Although badly treated in the Alliance, they are now treated with more respect and dignity, and are often considered the friendliest race in the Remnant. 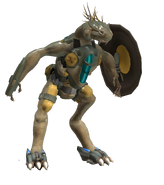 The Scavenger's are the most bloodthirsty race in the Cognatus Remnant, and although they are more commonly kept in check then when in the Alliance, they are still very voracious.

Chavelli, natives to the unknown regions of Quadrant 82 are members of the Cognatus Remnant, experts in building ships and weaponry, they aid the Remnant in their cause, friendly, strong but short tempered the Chavelli are dangerous to all they consider enemies, yet friendly to their allies. They do not worship the Atlantica as much compared to the others of the Remnant.

A new member of the Cognatus Remnant, the Atacmon have long been worshippers of the Atlantica and have joined their likeminded brotherhood in the hope of feeling closer to the gods. They form the diplomatic section of the Remnant and work closely with the Cognati to ensure an alliance with a suitable empire lasts.

Another new members of the Cognatus Remnant, the Bugahoulger are a friendly race of three-headed creatures who have a fascination with the legends of Atlantica and the Thirteenth Tribe. They are very intelligent, this intelligence being tripled for their three heads, and compose the technical section of the Remnant, where they study new technologies to be used by them and their allies.
Add a photo to this gallery 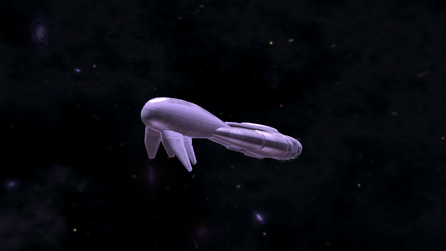 The CCS Class Battlecruiser is the most common vessel present in the Cognatus Remnant's Navy. At two kilometres long, the CCS is a large ship and yet small enough to be underestimated. It is highly effective at what it does best, glassing planets, ship to ship combat and destroying simply all it sees. 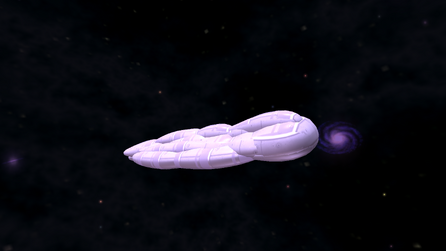 The Cognatus Light Frigate is a class of warship commonly in use by the Cognatus Remnant's Navy, primarily for escort duties and involvement in light skirmishes. 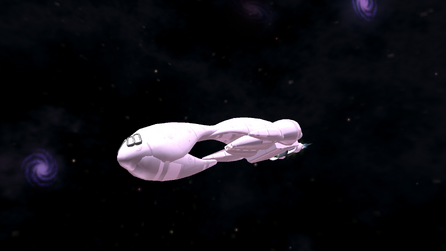 The Cognatus Assault Carrier is the most common flagship used by the Cognatus. The most famous example is the Shadow of Liberty which was used against the Rambo in the Intergalactic War, they are one of the most powerful ships in the Navy and are rivaled by few. 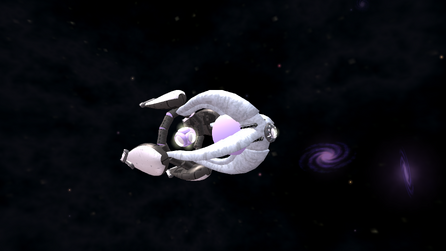 The Crusader Class is one of the most fearsome ships of the Cognatus, and in fact, is ranked as one of the most powerful ships in the Seven Starr Alliance database (a huge library and databank on known civilizations and transentients), even capable of being a serious threat to the DCP. They are almost two miles long (over 3,200 meters in length, half a mile wide and tall.
Add a photo to this gallery

“We hope that an alliance can emerge between us.”

“We will keep our eyes on these empires”

A Cognati Guard, often used to protect high ranking officers of the Remnant and the Cyrandia Alliance.

Quotes from Others Edit

Feel free to add some!

“It appears that we have been wrong about them. I hope our alliance remains strong.”

“Their beliefs are false. Only the Grox are supreme.”

“The strong and dreaded Cognatus. First almost destroyed us and the URC, almost devestated the known galaxy and later on became our ally and member of the Cyrandia Alliance. Who would have thought that two years ago.”

“We liked them better when they weren't a remnant.”

Retrieved from "https://spore.fandom.com/wiki/Fiction:Cognatus_Remnant?oldid=755855"
Community content is available under CC-BY-SA unless otherwise noted.