One world, one ruler.

Unknown
“One, the fires of forges burn,
Two, our wrath becomes a storm,
Three, we craft and shape our steel
By our King's immortal will,
Four, our horde cannot be stopped,
Five, the weak forsake all hope,
Six, our numbers dwarf the stars,
Seven: KOLDENWELT IS OURS.”

One of the elder races of Koldenwelt, the lordly Ordnung were once a mighty race whose Cobalt Kingdom had reigned over the Ar-Klith Mountains. Extremely disciplined, deceitful and utterly merciless, their innumerable legions once conquered entire civilisations in the name of their god-king, Goldemar. Overzealous in their goal to maintain order in their realm, they exterminated anyone who would dare to question their will - Ordnung and non-Ordnung alike. Fortunately for the rest of the world, the Ordnung mysteriously vanished circa 15,000 years ago, leaving only ruins of their once great civilisations.

There are rumours, however, that some Ordnung have managed to survive the fall of their mighty empire by hiding in the deepest caverns underneath Ar-Klith, beyond the reach of Klaxxa miners. If so, the Klaxxa and indeed, all Koldenwelti species should prepare for the arrival of their true masters eager to rebuild the glory of the ancients.

The origins of the Ordnung and their empire, called the Cobalt Kingdom for their affinity for metal and earth, are shrouded in mystery, but it is undisputed that they are among the most ancient races of the world, with their origins tracing back into the times when Colossi walked the earth and a force of great darkness, Caligaduro Provectus, ruled it. The ancient Ordnung were skilled mages, ingenious engineers and valiant, if arrogant, warriors. Having mastered the alchemical art of transmutation, they built massive cities, erected impregnable walls and crafted unbreakable machines of war to defend their domains in Ar-Klith against Caligaduro's armies. To this day, many of their mighty ruins still remain mostly intactt, a source of awe to the younger races.

As much as the Ordnung were respected, though, they were feared. Neither immortal like the Echdrarothrayu nor innately magical like the Sea Giants, which were the Ordnung's reluctant allies in their war against the Colossus of Darkness, this small but hardy race had to survive through ruthlessness and tenacity. Having no tolerance for weakness or stupidity, Ordnung rule was synonymous with tyranny and fear. Slavery of species they considered to be inferior, too, was not beneath them. Because of this, their relationships with other civilisations were never truly strong, with many considering them to be little better than the very evil they sought to vanquish.

Unlike with the other ancient races of Koldenwelt, the reasons for the Ordnung's downfall are unclear at best. Some believe that they perished during the war against Caligaduro like the Phoenixed did, while other scholars - most of them Klaxxa - claim that they in fact survived it and their civilisation was destroyed much later by the Ordnung's own slaves. Whatever happened, the once-great Cobalt Kingdom was no more. Now, centuries after its fall, the Ordnung are considered to be merely a myth, a legend; only the most educated scholars and those who have somehow survived the first wars against Caligaduro still remember the ancient conquerors from Ar-Klith.

The truth, however, is that they were never truly gone. 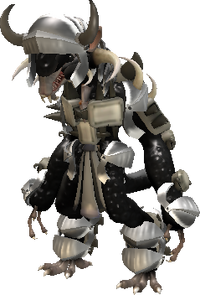 The sole species (various slaves and artificial creatures notwithstanding) of the Cobalt Kingdom are the ancient Ordnung, called kobolds in Undertongue. Twisted and disfigured, with long snouts and combining features both Deiwos and Kelodhros in their appearance, these goblin-like creatures are rather small in stature, hardly larger than Klaxxa, and may not seem threatening at all. The looks are decieving. Even a single Ordnung can be extremely vicious in battle thanks to their agility, cunning, iron discipline and sheer fanaticism, which can keep them alive even at the verge of death. Meeting a single kobold, however, is highly unlikely: because of the race's extremely high birth rates and strong sense of fraternity and comradery, an Ordnung rarely travels long or lives alone in groups smaller than half a dozen. Ordnung females, called breeders, are rare at best, being considerably larger than their male counterparts, and are used primarily for breeding. Their position in the society is important and they are respected greatly in the Cobalt Kingdom, but ultimately, they are still subservient to Ordnung males.

Unlike the mindless creatures of the Exosubstratal or the hellish warriors of the Legion of Shiarchon, the Ordnung are not intrinsically evil (although they are commonly believed to): they can experience happiness, they can have friends, they can feel love. Most of these feelings, however, are reserved solely for other Ordnung. Having seen the times of the ancients, the kobolds are highly mistrustful of other races, even when compared to such species as humans or Draonoggr. In their eyes, the peoples that now inhabit Koldenwelt are usurpers of their (and their former allies') once grand empires, and will have to step down for the natural order of things to be restored. The kobolds' fierce hatred for the followers of Caligaduro Provectus, however, is stronger than their contempt for the younger races, and they are willing to work with them - if it is clear who is in charge during such alliances.

There is little information about the Cobalt Kingdom's culture; most of the information about it comes from second-party sources and rumours. In truth, only two things are clear: that its subjects are xenophobes, and that it has a very rigid hierarchy of some sort being governed by "God-King Goldemar" (suggesting the Ordnung leader's immortality or a personality cult).

Virtually nothing else is known for sure.

Ancient Ordnung are believed to have been great mages, on par with the Sea Giants; according to legends, they were powerful enough to move entire mountains with their mastery over the Source. Also within their capabilities was the power of transmogrification; with their magics, they could transmute materials and metals into higher forms. The catalyst to this process was Shadow Cobalt, a magical metal which was found only in the deepest caves of Ar-Klith and which gave name to the Cobalt Kingdom as whole. Crafting and sorcery were thus one and the same for the Ordnung; the greatest of their smiths, engineers and architects were also the greatest of their sorcerers. Metals weren't the only thing Ordnung alchemists could transmogrify, though: it is said that they also turned animals and inanimate objects into sentient creatures to serve as their slaves, a feat unique to the species.

It is unknown how much of their original technological and magical prowess the current Cobalt Kingdom retains, but it appears from the short encounter the heroes of the Forgotten Lands had with them that its technology and magical knowledge still remains advanced in the modern age, though not to the extent of the ancient Ordnung. 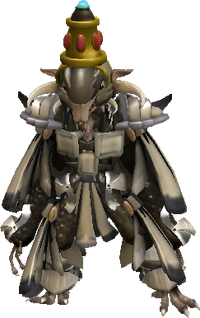 The alleged leader of the Ordnung people, God-King Goldemar reigned over the Ordnung during the ancient times and is said to rule over it now. Whether these rulers are the same Goldemar or merely two different Ordnung who happen to share the same name is unknown. 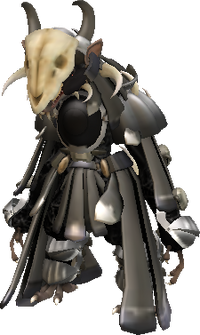 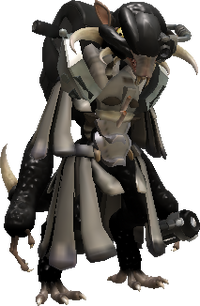 An ingenious mechanic who lived in the ancient times back when Caligaduro Provectus himself walked on Koldenwelt's soil, Zantastele the Craftsman, along with his battle brother Alpgast the Alchemist, was the Kingdom's messenger to the Dawn Wardens. Although the two seemed somewhat uncomfortable in the company of non-Ordnung at first, the two quickly grew to like their companions and with their brilliant minds, had proven themselves to be valuable, if unpredictable, members of the guild, and their magical mechanisms had saved it on multiple occasions. Outside of working with the Dawn Wardens, Zantastele and Alpgast also helped to create various alchemical weapons of the free people of Koldenwelt such as the Ordnung Eyes, Machine Drakes, and even Edifice himself.

As Alpgast was killed by a Chimera during one of the Dawn Wardens' many attacks on Caligaduro's domains, however, Zantastele's sanity began to shatter slowly; blaming himself for the death of his comrade, he became to grow increasingly more aloof and deranged as his guild continued to war against the Adversary, earning the moniker of Zantastele the Mad. Eventually, his insanity had reached its apex when he, consumed by his grief, constructed a lifesized clockwork doll in Alpgast's image and animated it with the Source so that it could replace his dear friend; it was then when his comrades, realising how twisted their friend had become, banished him - and thus broke his mind completely. Haunted by inner demons which were ere even more cruel that Caligaduro's own beasts, Zantastele then ran off into the Adversary's realm - accompanied only by his beloved watchwork toy - and never returned...

“They were...difficult to work with. But at least all life shared a common enemy at that time.”

“I can remember you! NEXT TIME I WILL SEND YOU ALL TO THE OBLIVION!”

“Work to be finished.”