“Destruction is your salvation.”

“Lay down your arms and embrace your fate for it is useless to attempt escape.”


The Clan of Daren is a moderately-sized, large-resource organization that was formed to serve the purposes and agendas of the Zazane demigod known as Kol Daren. The Clan uses a variety of methods to achieve its goals, varying between hiring PMCs, trafficking of various types, black market purchase, theft, kidnap, murder, assassination and many other otherwise-criminal offenses. Making use of several varieties of technology, ranging from moderately impressive to high, the Clan also supports an advantage in number and intelligence due to bribes and outside support.

The Clan of Daren's headquarters and ultimate agendas are unknown, although it is thought that it revolves around some form of galaxy-wide genocide of mortalkind as claimed by the Clan's de facto leader himself, although the means of doing so are thus far undiscovered. Like Kol, the Clan is merciless and ruthless in its reputation and achievements.

“They say that they are Kol's children. If such is the case, then they are the feral imps of a demon king whose sense of sadism rules over all.” 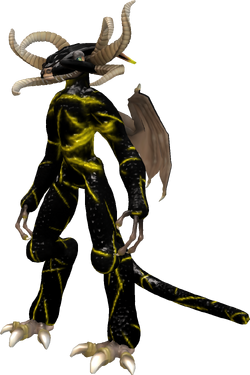 The Marked are the otherwise "failed" children of the Clan's infamous leader, Kol Daren, and serve as one of his most powerful invasion and assault forces within the Clan of Daren due to their ruthless, animalistic nature conjoined with their nigh-invincible physiology and biology. In terms of appearance, the Marked are Zazane-like creatures that tower over the average Zazane and display rather disturbing, child-like expressions upon their faces as if to represent their nature as being mere younglings.

The Marked are, for the most part, non-sapient and animal-like in their behaviour, although they do display at least some trace of intelligence due to being shown to be adaptable to situations concerning combat as well as "toying" with their prey and enemies. There are a certain few Marked Ones that display more sapient behaviour than the rest of their kin, employing tactics to a degree although it is rare to see the Marked act and behave as pack animals, usually caring for nothing other than themselves for the majority of the time unless commanded directly by their father.

Like most organic creatures, Marked Ones can bleed and suffer injury although their rate of regeneration is incredibly impressive, managing to heal wounds between mere seconds to several minutes depending on the type and size of the injury itself. This makes the Marked difficult creatures to fight in combat as it comes down to their Descension and Dark Chronoscopic capabilities, inherited from their father that happens to be an adept over these two particular Essences. Stronger, more individualistic Marked Ones are capable of accessing, to some degree, a Demon Form of some sort, making them devastating units in battle.

As side effects of their incredible Essence potential, their bodies possess incredibly high natural temperatures thus touching them with bare flesh can result in severe burning. In terms of a collective goal, unless they are serving Kol directly, they are driven by a single primitive instinct; to eat, with some larger Marked Ones cannibalizing their lesser siblings in order to quell their urge to devour. Marked Ones gain many benefits due to their Essence capabilities; they do not require rest, they do not tire, they do not feel pain and they gain an incredible sense of environmental and situational awareness alongside incredibly powerful degrees of strength. Bizarrely, they do not require food in order to function yet they seek out resources to consume nonetheless, most notably animals and sapient beings.

Marked Ones can vary indivdiually in size although most tower between 4-6 meters in height, although they can grow larger depending on how many creatures they have eaten and its age. There are at least three known methods to creating Marked Ones; being impregnated by Kol, transmission of fluids into a Zazane from a carrier of Kol's genetics or a Marked One giving birth. It should be noted that a carrier of Kol's genetics does not necessarily have to be a Marked One or even direct spawn and that Marked Ones are asexual, requiring no sexual activity and give birth automatically at varying times.

The Marked are universally physically powerful as well as agile and endurable, although their size can restrict them depending on the environment they're exposed to. Marked Ones are capable of traversing across walls and upside-down terrain without error and can observe through darkness perfectly due to their advanced senses of sight, hearing and smell. Marked Ones can leap significant distances, with more powerful Marked Ones being capable of levitation or teleportation. While all Marked Ones gain passive abilities from their Descension and Dark Chronoscopic energies, very few are capable of actually channelling it with those who can being rather aged Marked Ones, although their usage is still primitive and simple compared to Kol's adept skill.

It is unwise to fight Marked Ones in a head-on charge, as their only known mortal weakness is located behind them; the backs of their heads. Despite inheriting Kol Daren's genetics, their immortality only extends to agelessness and they can be killed by destroying their brains, although they are also susceptible to light-aligned Essences and find such wounds more difficult to heal and can even kill them without destroying their brain.

The presence of a large enough group of Marked Ones is capable of slowing down or speeding up the field of time, causing temporal distortions in sufficient hordes. The Marked cannot talk coherently although they communicate between one another through grunts, roars and growls of varying volumes and tones while these can be used as some form of intimidation towards non-Marked Ones.

Retrieved from "https://spore.fandom.com/wiki/Fiction:Clan_of_Daren?oldid=597091"
Community content is available under CC-BY-SA unless otherwise noted.