“Under no allegations have we bribed our fellow nations to attack our enemies.”

“We send this message to any other space nation. The CCS will always be open.”

A growing empire born in the heart of the Dumbinz Cluster in the Milky Way Galaxy, the Ciniade Coalition of Sentients (CCS) was formed from the sentient civilization of Chrian at the star-system, Acadia. The Ciniade Coalition started trading its knowledge on agricultural and defense technology for money, gaining wealth rapidly compared to its intra-systemic peers. It is also the leading member of the alliance called the Greater Dumbinz Alliance. It is also allied outside of the GDA with the Borlord Republic.

10 years after conception, the Ciniade Coalition made expansions corewards at Serpentriontus and Tallont. At this time, the CCS developed an isolationist foreign policy. A formal army and navy was declared to protect against the threat of force against the nation, recruiting many young Chrians into the Imperial Armed Forces and the Imperial Navy. They soon allied the neighboring space-nations called the Old Republic of Dumbinz (ORD) and the Progressive Taurian Union (PTU) creating the Greater Dumbinz Alliance. Along with binding diplomatic ties, the CCS also became a great trader by being a hub of intra-systemic trade.

After forming the Greater Dumbinz Alliance, the CCS began exploring imperialism and imperial tendencies. Under the leader, Tarialriph Najong, colonies were settled to increase its industrial and commercial capacity. Trade ships were commissioned under the central government to permit growth economically, rapidly expanding the wealth of Ciniade Society. Their age of expansion was coming to a close due to the warrior space-faring nations of the United Statuic Republic and the Brother at Arms Military Faction. They demanded tributes, both monetary and in creature sacrifice. Facing a severe economic loss, the CCS, under new leadership of High Minister Tallisaide Marissaet, decided to ally the nations to avoid falling into devastating economic collapse, briefly abandoning its imperialistic policy. Competing a series of exterminations and abductions on semi-sentient planets, the Brothers at Arms decided to ally the CCS. The Condensate of Corporations of Ciniade, however, were greatly damaged under the reign of High Minister. They hired a team of elite warriors to take out the High Minister and some key members of the High Council, leading to the re-insurrection of the High Leader. The new High Leader, Marixk Tapber, began installing more imperialistic council members, increasing its borders and economic welfare.

The Call to War[]

During the rule of Marixk Tapber, the neighboring nation of United Statuic Republic began a devastating war with the Orxi, a barbaric race capable of hyperspace travel. Many civilians living on the border planets involved in the war began fleeing towards the CCS, increasing the call for the CCS to fight the Orxi. The CCS sent hundreds of thousands of its military to destroy the Orxi threat, sustaining minimal casualties, assuring the alliance with the United Statuic Republic and the power of the CCS throughout the cluster.

After the war, the wealth of the Coalition was so great, that it engaged in several system buyouts. Many of the ORD's nations became subject to now CCS rule, including the original capital of the ORD, Blaine. These colonies proved useful and happily joined the Coalition, sharing its wealth and working towards posterity for the CCS.

War on the Frontier[]

After interfering in the Statuic-Orxi war, Marixk Tapber suffered bouts of mental breakdown, eventually causing his dark alter-ego to surface. Marixk bribed his allies to attack non-allied nations in an attempt to gain those territories. Millions of dollars were given away in bribes for the attacks. At first, many of the enemy nations crumbled until a few 2-3 systems remained. However, the firepower of the allies was too weak. Marixk demanded that additional attacks be made. He payed tremendous amounts of the CCS' money, but was futile in his attempts to be rid of the systems. He finally set his foot down and set troops to eliminate the systems. In the Rimward Campaign, he was successful, but the CCS sustained a dent in the amount of troops available due to the strong opposition. In addition to that, many allies pulled out their troops. Many in the High Council and the Grand Jury demanded that he be taken down, but many lobbyists from the Condensate of Corporations convinced he be in power due to the war profits companies were gaining. The Western Campaign was much more difficult. After gaining a foothold in the small colony of Duntl, the CCS faced multiple attacks from the opposition including one on the home planet, Acadia. In the end, the enemy home planet was bombarded with many heat-bombs that it became too hot for life, effectively beginning terraform warfare in the Dumbinz Cluster.

The recent war proved devastating on the CCS, so it went back to research, specifically bioengineering and geoengineering. Developments included sapience modifiers, proven to enhance brain and cognetic function; anatomical rehabilitation, in regrowing limbs and organs of organisms; sensory amplification, capable of enhancing the senses; rapidly adaptable crops, or RACs which could adapt to nearly any environment and provide a stable food source; and the top secret, corebuster, which would pull the nickel-iron out of the core of a planet, ultimately flooding the surface of a planet with millions of kiloliters of molten lava. The last bit of information was kept deep in the vaults of Acadia to prevent any nation from using it, including itself, unless it was needed in the most dangerous of times. Though reluctant, High Leader Marixk Tabper, went along with the scientific programs. During this time was that the Allerbmu Corporation under went sapience testing on local Leonida on the planet of Fanimax. In just 3 short years, the Leonida had already been able to take control of its star system. The Leonida had developed a harsh zealous belief, which caused the High Council great concern. It was finally Marixk who sent 300 thousand troops to massacre every Leonida, sapient or not. Incentives were offered for locales to kill any Leonida they found. With the genocide over, the Coalition absorbed the planet into the empire. Soon after the end of the genocide, Marixk died a self-proclaimed dictator by his people.

14 years after Marixk's death, the Coalition continued to prosper. More political radicals were appearing though. This resulted in much pressure for some systems to secede and form a new union. These systems were not oppressed, but faced poverty under the CCS' control. After several months, the systems decided to secede. They formed the Separatist Republic of Ciniade, which lead to the Separatist War of Independence.

Today's CCS is a bustling empire who is devoted to expansion, with lesser priorities on trade and science. It is currently led by High Leader Barthis Najong and enjoys a high standard of life, wishing to develop enough technology to exit the cluster and meet new empires. The Coalition is becoming increasing democratic and open to visitors.

Under the rule of the CCS, many corporations dedicated research towards the posterity of the Coalition. Main focuses included biotechnology, geotechnology, particle physics, chemotechnology, and advanced mechanized weaponry. From those fields the following technologies:

Currently, the CCS is run by the High Leader with help from a governing body called the High Council. The High Council commands various aspects of life in the CCS and are experts in their fields. Each High Council member must pass numerous and rigorous civil service exams before they are elected into position. The High Leader is elected through the votes of the Populus Council, leaders and representatives from each of the districts of the CCS. The main family in control over the title is the Najong family, who has a record of strong and capable rule. As the High Leader and the High Council create laws, the Populus Council approves them. If not, the law is rejected. A group of machines called the Supreme Arbiters oversee the process and judge if it is acceptable. Since the Supreme Arbiters are objectively overseeing this, they have all command over a law being passed or failed. In each district of the CCS, there are Planetary Presidents and the Low Council, having a similar process to the one before. The districts has authority over piracy and order, but the laws that the districts pass have to go to a committee from the Populus Council. A problem at first, dishonesty, cheating, and bribery in the Populus Council created issues which the Supreme Arbiters could not detect. However, the Mental Translator reveals the intention of every council member and is one of the barriers to entering any arena of CCS Politics. Current Statistics High Council - 23 members Populus Council - 2562 members

Before the rule of Marixk Tapber, the government changed under the High Council and the Populus Council towards the Republic of Ciniade Systems. The republic had abolished the Supreme Arbiters, believing that there needs to be a personal aspect and also abolished the Low Council and weakened the powers of the Populus Council. The High Council had the greatest power, but especially the war, diplomatic, and trade council members. The High Leader also changed into the High Minister. The government had a powerful diplomatic council member which led to a strong tie and action to act in the Frontier War. However, many people were upset by this due to the lack of societal power, so a group of assassins killed 8 of the High Council in addition to the High Minister. After this, the government reverted back into a Coalition/Democratic type state.

The liveliness of the Coalition's economy is dependent on knowledge and trade. Many of the coreward systems in the CCS are based of industry and research. For instance, many systems produce trillions of tons of synthase armor to export to other nations. Research and Development is also key, the region providing the best test facility hosting a variety of subjects of fauna, flora, small planets, and neutron stars. The central systems provide the role of trade due to being in the center of the Dumbinz Cluster. Many trade ships have to pay excise tax to pass through the region and provides a steady income for the government.

- A worthy and respectable empire worth our respect and honor

- These are standing empires that are quite admirable.

- These empires have angered us to war. 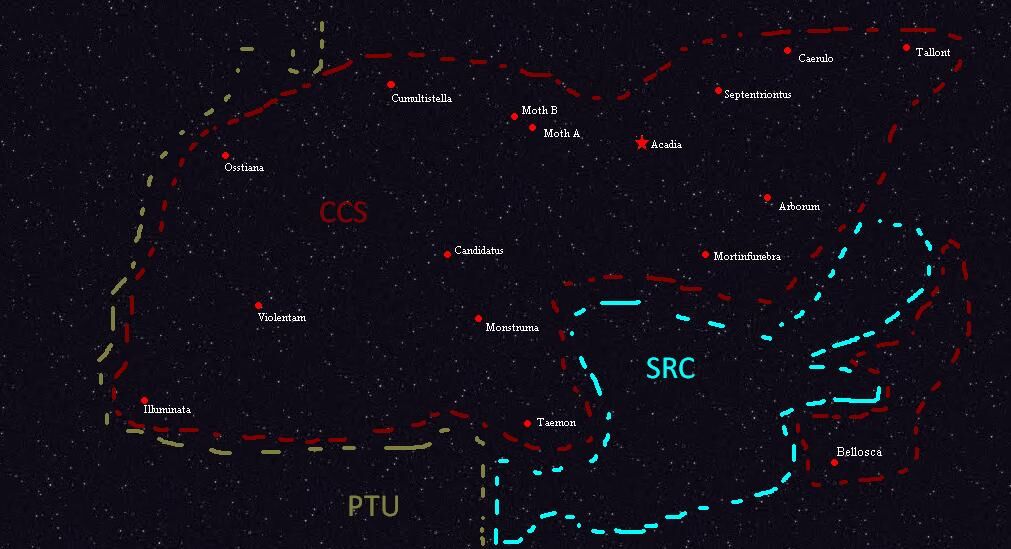