The Children of Synthesis were the unfortunate beings of the Borealis Galaxy who fell under the influence of Regnatus' psychic powers after his death.

The Children of Synthesis were formed after the Wranploer warlord Vorius got in possession of a piece of Regnatus' body a month after the latter's destruction at the Symphony of Flesh and Steel. Despite being only about as big as a Wranploer's hand, this piece of metal still held tremendous amount of psychic energy into it, which caused Vorius' entire planet to become indoctrinated. With Regnatus himself dead, the shard started to whisper rambling, barely sentient words into Vorius' mind, controlling him into creating an army of mutants so he could become "part of the plan".

The Children were created following Vorius' indoctrination, when the mad Wranploer used his Regnatus Shard to take over the minds of his Wranploer Remnant's inhabitants and then merge them together into an army of hybrid chimeras. During its formation, the Children of Synthesis was forced to work undercover, using the Regnatus Shard's powers to mask their presences and using seemingly harmless medical facilities to turn more aliens into hybrids. Victims of the Children during this time included other Wranploer Remnants, Da Rogue Boyz worlds and notably the Shield at one occasion. Once the Children's forces spanned multiple solar systems, their tactics changed and they began working more aggressively. An attack on the Aurfaust PMC resulted in the Children exterminating all criminal Dominatus in the Borealis Galaxy except for one individual. Following this, the Children notably launched an attack on the New Wranploer Legion's headquarters and later directly attacked Billig Oltauris. These acts consolidated the Children as a major scale threat at the Arm of Wildness, with pirate groups and Wranploer Remnants fearing they would be their next victims.

During the sixth year of the Ice Age, Vorius' plan escalated and was revealed to the galaxy: his ultimate goal was to become as large as a planet, calling himself a World of Corpses, by using the biomass of the victims he had gathered. The Children of Synthesis wiped out entire worlds to do so, including even the Imalmah Hegemony, and even being betrayal of the Spawn of Vengeance lieutenant could not slow them down. Vorius would achieve his goal toward the last few months of 2796 and turned himself into the World of Corpses, where he then engaged in battle against the united military of the Polar Crystal Alliance and many of its allies. Despite causing considerable casualties to his enemies, the World of Corpses was eventually breached and the allied force invaded his interior.

Inside the World's core, the united army fought hordes of mutants while Vekaron, Wragrot, Kilchárunya, Vansenk, Kamaris Vorava and Kirlisir were sent inside the Regnatus Shard's mind by Tuolog, where they engaged in battle against a fragment of Regnatus' soul. With Vekaron emerging victorious, Regnatus' soul was destroyed and the Shard which acted as the World of Corpses' mind became inert, causing the entire mutant planet to die out. After the armies retreated, the World of Corpses was bombarded from orbit and annihilated. The surviving mutant thralls of the Children of Synthesis who were not at the World of Corpses when it was destroyed were reduced to animal intelligence, and eventually all died out of multiple organ failures, leading to the end of the mutants' schemes.

The psychic power of the Regnatus shard with Vorius was capable of spreading into other pieces of equipment and even entire buildings, giving them indoctrinating properties which caused their victims to not fight back against the horde of mutants they created. The mutants themselves were capable of operating at any environment and did not have mental strains stopping them from using their fullest strength in combat.

While the Children were arguably under Vorius' control, it was actually the Regnatus shard who acted as the real leader. Despite being still alive and aware of their current situation, the tortured individuals composing the hybrids were not capable of fighting back due to the shard's immense psychic powers. The energy controlling the hybrids acted much like a hivemind, except the hybrids themselves did not have a say on the whole's actions.

The mutants of the Children were created on seemingly mundane medical facilities, which were then placed on victim planets. Due to the indoctrination effect of the building, the inhabitants usually did not suspect a thing, and were eventually compelled to enter it themselves, where they were then processed and chimerised. After worlds were conquered, mutants were left to wander around for themselves at the ruins of the cities they destroyed, awaiting for new orders. 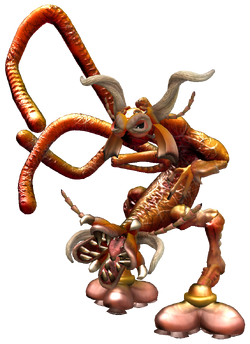 Vorius was a former Wranploer and the very first victim of the shard holding Regnatus' psychic power. Following the shard's deranged orders, Vorius had turned himself into a mutated chimera of multiple species with the objective of turning the entire Borealis Galaxy into an army of mutants.

Once a proud Wranploer follower of General Volim's ideals, Vorius had become little more than a transport for the shard living inside him. 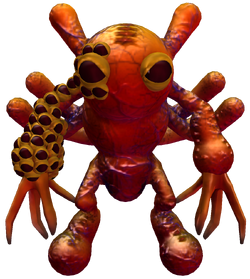 “There is nothing I cannot do. Not even death's cold embrace can contain me.”

The Spawn of Vengeance was a mass of flesh originated from Vorius who was given independent thought following the events of the Mass Armageddon. It was fueled by the Regnatus Shard Vorius obtained during the mentioned event and it was shaped in the form of the late Borealis Grox King Mirras III, serving as an equivalent of him for Vorius. The Spawn's creation was attributed to Vorius' desire to become as similar to the original Regnatus as possible.

Due to the contrast of personality between Vorius and the Spawn, it eventually betrayed its creator and attempted to lead its own Children of Synthesis. However, it was eventually slain by Vekaron and his team.

“So the cowardly machine reaches into the realms of flesh? Perfect...”

“The End Times come for these abominations. Only one future awaits them: purification by fire.”

“Such symphony of flesh. To be molded and sculpted into something so asymmetrical. Almost abstract.”