King
King Carnoria is the supreme ruler over the Sauriens since 3500 BQF at the planet Zevia, a planet located in the Quadrants. Carnoria is ruthless, with a constant bad mood and a like for meat and often bored by pleas of citizens. As such he is feared among the Sauriens, though he managed to set aside his anger and united the Carnorians and Velotarians under a single banner. Together he led them against the Iganudarian and conquered them.

Carnoria, well aware of the northern and western events fears that his power might be challenged one day and as such he now finds a way to ensure his rule for eternity. He allied the Galactic Empire of Cyrannus and even joined on one of their missions for a while before returning to Zevia again. Afterwards, afer meeting a young girl he became convinced of asking protection from Rambo Nation and became a consul within the Rambo Nation Goverment.

In ancient times Carnoria was born among the Carnorians, in the wild Western Swamps and always hunting other creatures found at Zevia. Over time, as Carnoria grew older he learned that the planet once housed Atlantica and that there were other sentient species at the planet as well. Well before 5000 BQF he managed to unite the Velotarians and Carnorians and together they attacked and invaded the Iganudarians, eventually conquering them after years of battle.

After there victory, the Sauriens (as the three races united were called) settled themselves in Carnivoria City, a city the Iganudarians were constructing at the time they were conquered. Though Carnoria was a general and fought and won the battle, his own grandfather was crowned king over the Sauriens. Furious he was forced to pledge loyalty, and began plotting against his grandfather. Around 3500 BQF he managed to kill his grandfather and was crowned King over the Sauriens, whom he ruled with an iron fist. Carnoria refused to have dealings with the Dilophio and exiled them to live a nomad live within the Western Swamps.

In 200 BQF he became aware of the Quadrantia Loron who constructed a base at Zevia. Ignorant he refused to have dealings with the Loron and continued to have the Sauriens live in isolation for decades.

Hunt for the Zevian Skull[]

After years of isolation and an iron rule over the Sauriens, Carnivoria City was suddenly visited by the Galactic Empire of Cyrannus in 02 NE/05 AQF. A young girl in service of the Empire found clues about a mysterious Atlantica artifact, and began her Hunt for the Zevian Skull. She arrived at Carnivoria City with two Imperial Ifrit-class star destroyers and demanded that the Saurien King told her everything about the Zevian Skull, unimpressed by the Sauriens appearance and threat to have her killed. Knowing his city would not stand a chance against space ship he complied and showed the young Imperial officer the wall plate that contained a verse, indicating that the Skull stood under protection of the Great Houses of the Quadrants. He also informed her that the Sauriens fought a war over the Zevian Skull with the Greendions but never found the artifact.

Afterwards he was forced to join Claire and her troopers to visit the abandoned and destroyed city of the Greendions up north, there he stood together with Claire at the temple and showed her it was empty, as they themselves found out decades ago. He was then forced to join her upon her Ifrit-class and travelled to the Gorarien Space Station. There Claire found a new way to travel to the Quadrants and search in secret for the artifact and Carnoria was send back to Zevia. Growing concerend he wandered what to do when months later, in 03 NE/06 AQF the humanoid known as Claire Rambo returned again to Zevia, now freed and again in service of a benevolent kingdom known as Rambo Nation. He welcome her again and somehow he was even pleased to see the human girl again. Together they studied the ancient markings at the wall again. Claire slowly began to interpret what it could mean. Thanking Carnoria for the chance to study the wall again, she asked the Saurien King if he wanted to join her again to search for the artifact, this time onboard the Suiliagothrond II. Carnoria refused gently, claiming his people needed him first. Though when she found the skull he would be interessted in looking at such an ancient jewelry. Claire nodded and told him that it could be possible for him to see it before transporting it to the capital. Expressing her thanks once again she left the city and returned to her space station while troopers installed a communication array for the Sauriens to contact Rambo Nation in dire need. Carnoria then began making preperations to join Rambo Nation as a protectrate, wich would give him a Consul seat within the Rambo Goverment.

In the fourth month of 03 NE/06 AQF Carnoria travelled to the Rambo Capital where he met with Empress Ramashe of Rambo Nation, Lourdes Windrunner of Carnthedain and S'Rell of the Caizini.

During the meeting Ramashe announced the expansion of the Treaty of Fornaeria, the Treaty of Serindianlia! The expansion allows individual sectors/planets to become "protectrates" of Rambo Nation. Allowing them to keep their own ways of living, their traditions and beliefs, as well as their own selected rulers. As an addition the Rambo Navy would patrol and defend their territories against out side threats and individual members could become full Rambo Nation citizens if they would want to serve on Rambo Navy ships or at Rambo Command.

Afterwards Carnoria returned to Zevia, pleased that his people could finally explore the starts and join forces with the Blue Crusaders of the Stars.

Carnoria is ruthless, with a constant bad mood and a like for meat and often bored by pleas of his citizens. As such he is feared among many though also knowns when to set aside his aggressive nature and start diplomatic relations for the better of his people. For a non-space faring civilization, he is well aware of the northern and western events fears that his power might be challenged one day and as such plans to ensure his rule for eternity.

As a Carnorian, he is dangerous and cunning, measering over 2.63 meters he is quite an impressive and imposing figure. In combat, Carnoria often uses his lenght and size in combat. Like most Carnorians, Carnoria himself his also known to be brutal for his enemies and allies. A less accepted trait, though normal for the Sauriens is that they like to eat their victims, feeding of their flesh and bones it often become a great celebration with drank and music. As a Carnoria he is also very endurable and can take quite some damage to his own body before collapsing, and without willing to surrender ever it makes the Carnoria a dangerous enemy, and a strong ally.

After becoming a Consul of Rambo Nation, Carnoria pledged himself fealty to House Le Rambo and became a vassal and bannerman for their house, though was allowed to keep his title King, and has to be adressed with your grace as well, as consuls are protectrates and not full members of Carnoria is proud of his ancestors and is one of the eldest noble families within the entire Quadrants. Motto:Tremble at Thee Power
Under Quetzamet Grace
Sauriens of Old
Thee they Growl 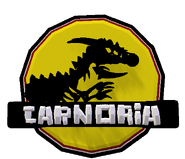 “Fear the wrath of the Sauriens!”

“An imposing and impressive Saurien, behind his bad mood and cruel attitude I believe hides kind and gentle Saurien”