The Carina Nebula is a large, complex area of bright and dark nebulosity located in the Carina–Sagittarius Arm of the Milky Way Galaxy. The nebula lies at an estimated distance between 6,500 and 10,000 light-years from Earth, and is one of the largest diffuse nebulae visible from the planet. Although it is some four times as large and even brighter than the famous Orion Nebula, the Carina Nebula is much less well known, save for those who inhabit it and interact with its inhabitants.

Known for harbouring the Carina Foundation, an organisation founded by the Yphreli Glaciation and Eovinjai Sovereignty for the purpose of developing highly advanced and unorthodox technology, the region is currently under occupation by The Grand Teyan Empire, though the astropolitical region largely is claimed by the Ankoran Empire and Eovinjai Sovereignty. The region also contains a wormhole to Andromeda's Segmentum Exterioris, the Vana-Lyrx Gate, which lies within Ankoran territory.

The earliest evidence of sapient activity in the Carina Nebula astropolitical region dates back to around 12,000,000 BCE, with the Psal'Jinnai Symmetry establishing a prominent presence that included and extended beyond the entire region. Over the course of their civilization's existence, they would nurture the growth of life throughout the Carina Nebula and its surroundings. Organisms born to live off starlight and interstellar dust seemed to bloom in the light of the hyperadvanced civilization. Sometime before the collapse of the Symmetry, the Ankoran species of Usse would rise thanks to the tender hand of the Psal'Jinnai, as the sole Progenic species of the Milky Way.

Generally considered the heart of the Carina astropolitical region, Eta Carinae was a historical nexus of Symmetric activity in the region, and their Milky Way sphere of influence as a whole; this has often been attributed to its rather unique nature. A number of Symmetric installations remain in the space around it, largely inert. Formerly held by the Ankoran Empire, the star served as a hub for trade and international political and scientific activity for centuries. In 2822 it fell to the Grand Teyan Empire.

The Homunculus Nebula, which surrounds the star, is also home to a number of Symmetric installations, many of them larger than those closer to Eta Carinae. Ankoran research stations orbiting or built on these installations are relatively common, but have been either destroyed or overtaken by the Teyan invaders, who have also set up a Krasnikov Warp Gate in the nebula.

Eta Carinae is considered a prime liberation target on the Milky Way front of the Teyan Subjugation War, alongside New Bucharest and Kai-kalan.

A small dark cloud of cold molecules and dust within the Carina Nebula, containing bright filaments of hot, fluorescing gas, silhouetted against the much brighter background nebula, the Keyhole Nebula, typically referred to as simply The Keyhole is a minor political area of the greater Carina region, though noted for containing a major Ankoran military station. It is also the location of the Vana-Lynx gate, and zealously defended by the people of the Carina Nebula for it's vital link to the Andromeda Galaxy.

A poorly understood region near the heart of Carina, the Wights' Rift cuts a distinct gap in Ankoran territory. For reasons still unknown, hyperspace within the Rift is highly unstable and difficult to traverse, resulting in a lack of colonization, military presence, or even territorial claims in the small pocket of space. 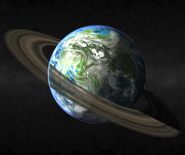 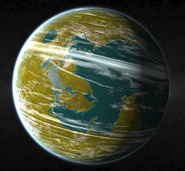 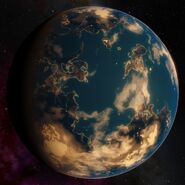 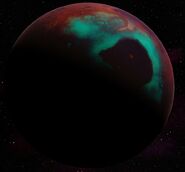 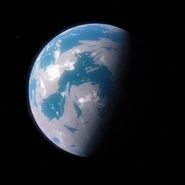 Soen-Sul
Add a photo to this gallery

The current political climate in Carina is not dissimilar from that of Segmentum Exterioris: it is largely centered around both native and foreign responses to the Grand Teyan Empire.

Retrieved from "https://spore.fandom.com/wiki/Fiction:Carina_Nebula?oldid=796977"
Community content is available under CC-BY-SA unless otherwise noted.