“To live, we must kill.
Preserve ourselves and others.
We serve the Warhost.”

The Warhost is the military arm of the Brood of War - the branch responsible for land-based operations and the onboard protection of Brood naval vessels and installations. They function as both local ground forces for pre-established colonies and settlements and as a foreign assault force against hostile organizations. The Warhost is the numerically-dominating arm of the Brood, possessing a number almost equivalent to that of the overall civilian populace and are generally renowned as being one of the strongest, as well as largest, registered militaries throughout the Andromeda Galaxy.

The Warhost was founded from the remains of the Zazane Empire military after the Holy Shadow War - gathering all surviving armed forces that were available to them, the Brood of War seperated these militias into two military-orientated organizations; one became the Convocation, the other became the Warhost. As the Empire had been devastated from continuous conflicts and wars the Brood was weak and decrepid upon its founding and required a sophisticated, standard military organization in order to protect it while it sought out for assistance and help.

Eventually, the Warhost grew as more Zazane were absorbed into the Brood and other species had accepted protectorate status. Soon, the Warhost underwent official changes to its regulations and administrations in order to better acclimatize to the changing times, becoming modernized and far more sophisticated than before when it was but a mere fragment of the Zazane Empire's military arm. Instead of being a single massive force, it was decided that organizations would be better-monitored if they were divided and thus the Warhost became an official arm of the Brood, alongside the Convocation although none would assume control of either's forces officially. Despite being bureaucratically severed, the two organizations would continue to operate closely together as the two of them were, and currently still are, vital to the Brood's preservation and survival.

The Warhost would be a major contributive power in the foundation of the Andromedan Galactic Commonwealth, donating a great many soldiers, military assets and territories in order to provide the foundations for one of Andromeda's most powerful and sophisticated militia - the Guardians of Light. The Warhost was so vital to the Guardians of Light's foundations that it would be one of the Brood's political and military personnel, Tyraz, who would become their first Grandmaster; the ultimate commanding rank within the Guardians' hierarchy.

At the same time several policies within the Brood were investigated and modified by the Conclave, most especially the Brood's anti-cybernetics stance against both its allies and its member races. Eventually cybernetics were legalized throughout the Brood, including the Warhost, for its member races including the Zazane although the latter tend to refrain from modifying and enhancing themselves cybernetically out of matters concerning honour and pride.

Since the reformation and division of the Imperial Army the Warhost has used a hierarchial system seperate from the Convocation, with the authority of those within the Warhost only extending towards those who serve within and under the Warhost rather than any external organizations, although those within the Warhost's High Command pose some degree of political power and influence which can effect the cultural and societal aspects of the Brood as well as the administration of the Warhost. The Warhost applies the following titles arranged in descending order;

The ranks of the Warhost are achieved through either meritocratic promotion or conditional kratocratic ascension and almost all ranks, aside from the Militant status and the ranks required for entry into High Command, are achievable to registered aliens and protectorates species of the Brood, regardless of whether they're cybernetically enhanced or not. All military personnel are required to have official military-standard training and prior education with sufficient grades in order to become members of the Warhost, although the organization does provide open learning courses for those interested to join, with the process being mandatory for all Zazane although this law is merely cultural and does not effect other member races.

Those of the "Militant" status are able to operate independently or with an assigned taskforce, although the rank is exclusive to Zazane as of current. Militants are recognized as important individuals that are free from command of the standard hierarchy although their authority can be overuled by higher-grade Militants or members of High Command. Militants are also assigned a specific area to operate within, which can be located both outside and within Brood territory, and possess automatic authority over any local forces. Militants can elevate their rank and position through the usual meritocratic or conditional kratocratic methods.

Oftentimes, High Command will be responsible for contacting outside organizations such as the Convocation for aid in case operations and assignments go out of hand although such will not always guarantee their aid, thus political ability and a way with words and influence are required to win over the support of external militias and co-operate. High Command is also the only official authority that can command Militant-status individuals aside from other Militants, meaning that High Command supervises and monitors such individuals almost constantly as well as keep check of their military records an backgrounds. It is also they who decide who can assume Militant-status and who doesn't.

The Native Defense Arm deploys soldiers and assets upon pre-established bases on colonies, with nearly all Brood settlements possessing some degree of local defense force in case of attack. The Native Defense Arm patrols its assigned colonies frequently, providing regular updates and reports to High Command concerning the integrity of various aspects of their worlds, such as the political news, civilian status and local astronomical phenomena which may register as hints of hostile contact and patrol.

The Native Defense Arm is nearly always seen first during attacks on Zazane colonies as it is their job to defend residual, industrial, and commercial areas from hostile offense. The Native Defense Arm organizes and divides itself according to the situation at hand and the customs they have been adapted to, usually either taking advantage of numbers to overwhelm an enemy while various specific operatives employ strategic tactics in order to presumably flank enemies. The Native Defense Arm is equipped with heavy stationary weaponry and an array of vehicles that are suited for defensive and counter-offensive purposes. Their priorities range from assisting in the evacuation of the civilian populace to holding the line until reinforcements arrive, although ultimately their main responsibility is dealing with the threat no matter what. 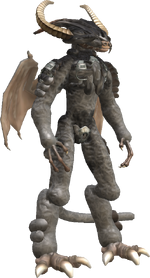 “What is built in the image of Zazane must act in reputation of Zazane.”


Synthetic Combat Units, otherwise known as SCUs, Combat Synths or simply Synths, are artificial organisms designed and programmed to function as either support or replacements for infantry and have been in usage by the Zazane for a time now-forgotten. Unrestricted by cultural and moral ties, SCUs are ruthlessly efficient and an intimidating sight upon the battlefield due to their merciless nature and intention, capable of overpowering standard Zazane soldiers in terms of physical ability as well as being able to withstand significantly more damage to a wider degree.

They are based upon the physiology of the organic Zazane and thus are equipped and designed with a similar internal and external aesthetic, although they lack otherwise obsolete systems found in organic lifeforms such as digestive tracts. They possess artificial brains which allow for all on-field actions that an SCU is capable of accessing, as well as serving as memory storage banks that record, observe and analyze enemy physiology, technology and strategy in detail in order to adapt to it and find ways to overcome such. SCUs possess regenerative hardware based upon that of organic Zazane, allowing them to recover from nearly all forms of injury and damage performed upon their physical bodies both internal and external. Despite this SCUs do possess several fundamental weaknesses; the napes of their necks can be severed in order to disconnect the brain from the body and cease all mobile and regenerative functions, and the recovery process for most forms of injury is not instant and SCUs can be damaged further in already-damaged places that haven't fully healed.

SCUs are capable of using nearly all forms of infantry-issue weaponry, with some particular models possessing specializations. They possess advanced and complex software and hardware that allow for SCUs to be largely self-aware and possess effective navigation and targetting abilities while also almost-constantly processing strategic and tactical scenarios and algorithms on and off-field. SCUs run on quantum-scale batteries although they do possess an equivalent to blood; super-heated Shidium that is constantly suspended within a liquid state which acts as a self-defense mechanism when injured, burning through enemy armour and flesh.

SCUs are overall far more physically capable than an average Zazane footsoldier; they are stronger, faster, more agile, and possess reflexes and senses that are immensely difficult to match, let-alone outdo. They are given commands and objectives by either on-field personnel or by combat AI situated upon vessels suspended within orbit that uses nodes deployed to the battlefield in order to manage and organize individual units and squads. SCUs possess in-built kinetic barriers and onboard temperature management that allows them to operate in extreme conditions without freezing or burning internally, making them more than a challenged for any hostile force.