“War is a fine piece.
The Conclave is an artist.
They make our choices.”

- Zazane haiku revolving around the Conclave

The Conclave is the executive and legislative arm of the Brood of War, serving as the Brood's government body. Responsible for establishing law and administration within the Brood and maintaining beneficial relationships with external organizations and civilizations, the Conclave consists of a variety of important individuals from across the Brood, including its military-orientated organizations and its protectorate races.

The Conclave's legislative branches extend towards the Governors and Councillors while the executive responsibilities and influence is held by the Lord Councillor; the otherwise highest political authority within the Brood of War as a civilization, thus being able to decide which legislations are set in place as well as possessing the power to deny decisions and eliminate any establishments. 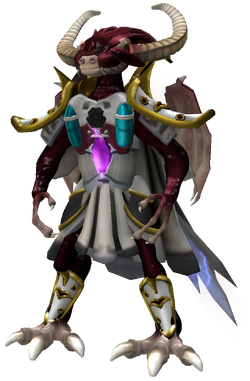 “I have taken up the mantle of Andromeda and have become its guardian.”

Tyraz Breek is the founder of the Brood of War and the first member of the Council of the Brood. After renouncing his position as Emperor of the Zazane Empire and founding the Brood of War, Tyraz Breek had accomplished his goal of bringing the Zazane together as a unified race to preserve themselves from war, which was leading to their demise. After destroying Moxix Breek during the Holy Shadow War and taking part in destroying Shu'rimrodir during the Second War of Black Fog, Tyraz had made himself a respected figure within Andromedan society due to his efforts in fighting the Andromedan Grox Empire during the Andromeda War. Tyraz also allied the Brood with the Draconid Imperium and Divinarium, befriending and now protecting Uriel Ultanos and Iovera IX, who he is now married to.

Tyraz Breek is noticeable for his Descension powers, which has defined him in various cultures as "demonic". However, despite his past of destruction and his hellish powers, he seeks to redeem himself as a person and has become a protector of the Andromeda Galaxy rather than a bloodthirsty warmonger. Tyraz is also known for his iconic Firesword, which he gained during the Holy Shadow War, and the ability to transform into a higher state of power known as the Demon Form. 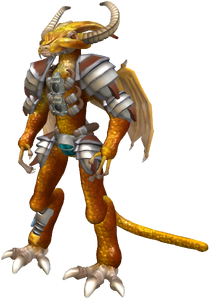 “Whether you be god or dog, none of you are to be spared.”

Savas Golge is the founder of the Section IV, which deals in special police enforcement within Brood territory as well as dealing with internal threats of terrorism, occultism and other considerably heinous acts. Savas is considered perhaps the most physically powerful and most strategically professional normal and unenhanced Zazane in current existence, capable of standing toe-to-toe with Essence-based individuals and monsters. Savas displayed his incredible feats of power and strategy during the Holy Shadow War when his homeworld was under attack from both the Tabescere and Cult of Five, making him a noticeable war hero for defending his people and launching an offensive against the two attackers. After becoming a Councillor of the Brood of War, Savas formed Section IV, which consists exclusively of Zazane and Zoitharna. Savas' skills are shown mainly in his melee fighting, although he is known to be a very potent shot as well.

Savas, despite his knowledge of war and participating in many bouts of bloodshed and conflict, is not a philosophical character and enjoys the idea of fighting, as he is fundamental in his belief that Zazane were born to fight and wreck havoc amongst the weaker races. He is known for his intolerance towards aliens aside from Zoitharna, which he considers barely related to Zazane, and sees himself as allowed to express this opinion of thought in public towards high members of alien societies. 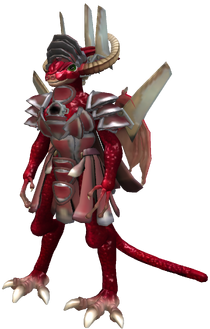 Keldar Taran is the founder of the Nuns of Conflict, a militaristic organization for Zazane females who had fought to protest against the way that the Zazane Empire were treating females and sought to overthrow the government at the time, with Keldar leading the charge. However, during one assault upon the Zazane Empire, the Nuns were attacked and almost completely subdued by the Cult of Five and were forced to work alongside the Zazane Empire to ensure their own existence as a race. Keldar received awards of honour and bravery for her efforts against the Cult and, upon her request, female Zazane were granted equal rights and were allowed to become more than simple breeders. When the Brood of War was formed, she was offered a place to influence the Brood's government and accepted the opportunity. She formed the Woman's Organized Military Bloc as her own independant military organization consisting entirely of female Zazane as a successor to her previous Nuns of War movement.

Keldar displays impressive endurance and offensive capabilities in battle, with her rather attractive appearance capable of stunning males and uses this to her advantage to end fights quickly. Unlike most female Zazane, she is not a sadist nor is she masochistic, she does not take pleasure in watching other people suffer nor does she enjoy giving or receiving pain. She is an idealist and sees the Zazane with potential to become an ultimately more benevolent and less warlike race in the future.