Rambo Nation
Ser Baladruil is a Balaseara, native to Ramahri Nova and formerly served within the Navy of Rambo Nation as a captain onboard the Miranda-Class, the USS Valor. After the signing of the Nim-Glaré Concordat, Baladruil left the navy and went in to hiding at Aegimi, as he loathed the Galactic Empire of Cyrannus publicly.

Captain of the USS Valor[]

Born in 26 BQF at Ramahri Nova, ever since youth he lived among the Rambo Serindia at “colony”. Though the home world of the Balaseara, the Rambo colonized the planet well not being aware of the non-space faring natives. For years the natives were not considered citizens, as the Rambo law prevented that.

Among them, Baladruil tried to chage it as he was a knight, the resolution came in 03 AQF with the Treaty of Fornaeria. After the Balaseara became citizens, Baladruil joined the Rambo Academy in Rambo City and graduated a year later in the 10th month of 04 AQF, given command of the USS Valor, a Miranda-Class. Baladruil and his crew were drawn into the Great Cyrannus War, where Rambo Nation together with the United Republic of Cyrannus fought against the Confederacy of Allied Systems. Their first assignments included border patrols, as they were inexperienced and the war was far from Rambo borders. This all changed during the 12th month were a Confederate fleet engaged the Mid Colonial Sector, starting with Matakoro. During the Rambo efforst to retake the planet, the USS Valor was damaged by the Confederate Frigate, Corperate and took heavy damage, forcing her to be tagged to the Shipyards of Rowar after the conclusion of the battle for intensive repairs. During the remaining of the war Baladruil and his crew remained out of harm’s way, though were shocked by the signing of the Nim-Glaré Concordat, and the Galactic Empire of Cyrannus strong hold over the new Rambo protectorate.

Refusing to bow to traitors, Baladruil publicly critizied the Empire beforing going into hiding at Aegimi, living his life there as a fisher and Hedge Knight, famous for guarding tourists who wish to enter the frozen tundra’s and dare a glance at the Four Peak Temple. Over time, he earned a nice amount of money and persued his own fisher boat, he also grew friendly with Anciaddwia thoug took a great dislike to the Frost Mage, Ramthas Coldbreath as Baladruil found the mage too interessted in the Four Peak Temple and its origins.

Baladruil is an honorable and clever man, a great knight with a keen nose of profit, he is one of the few who own a fisher boat to fish on the Karpraids at Aegimi, who bring up a nice deal of money due to their popularity as a served dish. As a captain, he had a gentle but just hand in command, his crew loved him for it.

As a knight he has a strong sense of justice, and often grinds his teeth at slights, not wishing to disgrace his own honor by falling to give slights back. He also has a black sense of humor, is rather pragmatic, and skilled in the use of his great sword, "Cleaver". 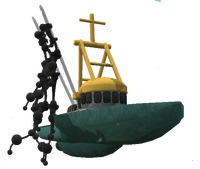 “My sword is yours!”

“May the blessing of Horus be with you!”