The male HarbronrSaurien Asparex is the Lord of Impaerusqiantia , younger brother of Saraxvrantrix S'aur and is a proud and capable ruler over the former bastion of the Imperial Alliance. Together with his acquaintance, the Ancrevialicia lady Aur'Shivania they stood at the birth of the creation of the Rambo Clone Trooper Army, a great asset for Rambo Command.

He is known to hold grudges, grinding his teeth when frustrated and utterly without mercy for those he considers his enemies.

Asparex is born in 150 BQF at the HarbronrSaurien homeworld in the Tigris Galaxy in a prestige family of politicians. His elder brother, Saraxvrantrix S'aur was gifted with the same talents, while Asparex rather desired a postion within the military. For years, Asparex served onboard a cruiser as a Centurion, aiding those Sauriens in need and defending his people against the threats of Tigris. As a Centurion, he eventually became somewhat of a hero to the outer colonial regions of the HarbronrSaurien territories. He was proud to see his brother become the leader of the Saurien Sector Coalition in 100 BQF, coming with a promotion to Tesserarius. Asparex was among the Sauriens who made first contact with Rambo Nation around 95 BQF, impressed by their civilization and planets in the Tigris Galaxy like Ramirith, Asparex became one of the few among the Sauriens who developed a certain respect instead of hostility against the colonizers from the Quadrant Galaxies.

He was saddened when relations went sour in 21 BQF with the outbreak of the Tigris War. Upon the destruction of the galaxy, he migrated to Quadrant 89 with the rest of his people but did not want to join the Imperial Alliance. Forced into servitude he saw his people in combat during the First Galactic War and the Second Galactic War in 0 BQF. After the losses, Asparex led a coup d’état against his brother and the Emperor, Morgandaûr. With aid of Aur'Lodin they dispatched the Emperor and Asparex led his people to liberate and conquer the Imperial bastion in Q89, Impaerusqiantia. He then pledged himself loyal to Empress Ramashe and the Rambo Government, something the gladly accepted. Since then he led his people to rebuild Impaerusqiantia with their own structures, though the main forge remained intact and became his seat of power after the HarbronrSaurien elected him as Lord of Impaerusqiantia.

Meeting with the Ancrevialicia lady Aur'Shivania, they used the Forge and the lady her knowledge to create the foundations of the Rambo Clone Trooper Army, elected Asparex to the higher echelons of Rambo society, earning him the gratitude and wonder of many. He also reacquainted with a species from the Cyrannus Galaxy, as they shared the same ship designs Asparex believes that there is some sort of ancient connection between the two, though his desire to befriend the Jenassian Regency is often met with discontent by both the Rambo and the New Cyrannian Republic.

In July 2820, after Impaerusqiantia was liberated Asparax pledged his support to Jioan and joined the Dinotopian Republic. As Jioan was elected first president and pledged his support to aid the Rambo Loyalist Asparex focused his efforts on rebuilding the planet and repair the ShadowForge Keep and Industries.

Asparex is a smart, proud, cunning and dangerous ally and foe. Holding his people virtues and health above all others, he is often described as unreliable and is not easily tricked to make rash decisions. He often overthinks his actions before taking a decision, not caring whether or not his allies are in dire need. With a keen eye for tactics and warfare due to his military background, he is one of the foremost military experts within Rambo Nation at whole. Though not serving at Rambo Command, he is known to give advice when asked for military ground operations, as the clone armies are created at Impaerusqiantia. He is loved by his people, whom he loves in return and would sacrifice his life if it would mean the safety of his people. Some outside the HarbronrSauriens call in whispers him a turn cloak due to his betrayal of Morgandaûr, though none is foolish enough to speak it a loud. He is well respected among the Rambo nobility. 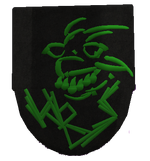 He is known to hold grudges, grinding his teeth when frustrated and utterly without mercy for those he considers his enemies. As Lord of Impaerusqiantia, Asparex and his family became a Great House, with their own sigil and motto, a green drawn HarbronrSaurien head and the written words: HarS, a short for HarbronrSauriens. Their motto:
Our Hammer Springs
Our Sweat Flows
Under Wings of Protection
Sauriens Roar Deafens all

“May you never betray my trust!”

“A military brilliant strategist, proud of his people and a great asset to Rambo Nation!”