Head of HouseFroramsilia and Director of the Cooperation

Argathon Froramsilia is the director of the trade organisation known as the Cooperation, powerful and influential trade organisation within Rambo Nation, having dealings all over the Quadrant Galaxies. Argathon himself is the Head of House Foramsilia, making him a Lord among the noble families of Rambo Nation. Over the years, Argathon has shown himself often making shadowly deals, undermining the authority of the Rambo Goverment.

Argathon was born in 2672 (126 BQF) at the Rambo Prime, their noble status dated back well before the forming of Rambo Nation. During his youth Argathon grew interessted in this ancient heritage and loved reading about it. After serving a term within Rambo Command as an ensign onboard a starship, Argathon soon left and began studying politics and trade, allowing him to eventually to found the Froramsilia Company Association in 2723 (75 BQF) with it's main base of operation at Rambo Prime.

With is wealth as a noble, he bought an abandoned castel at Rambo Prime and turned it into the headquarters of the Cooperation. Over the years, he expanded the Company, owning multiple buildings across Rambo Nation. As one of the main and most powerful trade organisations within Rambo Nation, Argathon was often investigated for trade indications with the Syndicate and other shadowly organisation, though was never proven.

After the Second Galactic War in 2798 (0 BQF) Argathon was involved in an accident, an unknown liquid exploded near him and changed his color to dark blue, feeling more an outcast then ever, he was soon contacted by the Hutter Kingdom, with whom he made a very interessting deal and providing him with the means to produce their own V2 vessels. With the joining of the Zarbriaek and other new species in the Rambo Nation society after the signing of the Treaty of Fornearia in 2801 (03 AQF), Argathon expanded his trade fleet with Amiaeria Capital Ships and Serindia Caradhras-classes, able now to force trade embargos and blockades. As the Great Cyrannus War broke out in 2802 (04 AQF), Argathon was once again investigated following indications he wished to trade with the Confederacy of Allied Systems. During the outbreak Argathon was often found at a dock in Ga-Laiquendi, a city at Karzhamarhi-Nui. There the Company began constructing the Roodiruini Class, a strange looking ship with unknown abilities and was classified and off limits, indicating their expanse beyond just a trade organisation. Sadly the planet fell under attack by Lizaconda though both Argathon and Chuinaylia Ivalaë Pantaria managed to escape. He then abandoned the idea and returned to Rambo Prime.

During lunch at the first day of 2805 (07 AQF), Lord Ramtainus Ramveral met with Lord Ramtterson Ramcelsior and Lord Argathon Froramsilia to discuss the Viral Outbreak at Koerband and the creation of a private fleet for Rambo Prime. The elderly Ramtterson didn't want to hear of it and Ramtainus soon left in anger, leaving a concerned Ramtterson and Argathon behind. Ramtterson asked Argathon to watch Ramtainus for him, fearing that he might do something against the interessts of the Crown and split Rambo Prime in two, one supporting the Monarch and the other Pro-Imperial. Argathon was happy with it, he never liked House Ramveral and their prestige and arrogance.

At 10 may 2810 (12 AQF), Argathon Froramsilia, amongst others were present when Rambert Ramveral crowned himself High King of Rambo Nation after Lord Regent Rambarth Dino II Le Rambo had passed away due to old age in the night. Troubled by this new course of event, Argathon set in motion to befriend the new king to gain a better position for himself, secretly undermining his vassal status to House Ramcelsior whom he knew would secretly remain loyal to House Le Rambo.

Argathon is a clever, intelligent and cunning individual with a great deal of influance and wealth within Rambo Nation. Due to his noble status and head of House Froramsilia, Argathon owns the title Lord, something he is very proud of and boosted his arrogance. Being the director of the Cooperation as well, the Cooperation wears the official sigil of House Froramsilia as it's banner. The sigil and Coat of Arms represents a blue colored Veloraptorae (creature found at the Rambo Capital) with a purple background. The House words are: Death is striking. Argathon is noted for wearing a wrist-watch, often noting the time and dates on this watch, is also is a portable holo channel.

Argathon is a person who always seeks to expand his influance and power, wishing to one day recieve a seat as Master of Economics at the High Council, he grew furious when he heard that a Quadrantia Humanoids|humanoid known as Robert Jonathan Lefler was given the seat instead of a Serindia noble. Since then he began losing faith in Ramashe as a capable ruler, making it worser when the Galactic Empire of Cyrannus placed Rambo Nation under it's "protectrate" later on.

Forces and ships classes under service and wearing the sigil of the Cooperation and House Froramsilia: 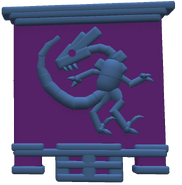 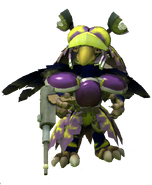 Froramsilia Guard
Add a photo to this gallery

“They earned my grattitude!”

“I can make a profit of them!”

“Halt, in the name of the Law surrender!”

Froramsilia Guard Png
Add a photo to this gallery

Retrieved from "https://spore.fandom.com/wiki/Fiction:Argathon_Froramsilia?oldid=837553"
Community content is available under CC-BY-SA unless otherwise noted.