Ardenta belongs to us and us alone.

Destroyed
“Sons of Ardenta, scions of Grochius! For many millenia, for millions, for BILLIONS of years, our home was lost. For how many years we haven't seen the light of Grochata? For how many years our kind's foot has not stepped on the silver ground of Attzerry?
But today, EVERYTHING will change. We have been consolidating our power in Ardenta - Andromeda, how these lower beings call our true birthlace - for years, and this day... we shall reclaim our birthright to rule these stars! And without any doubt, we... shall... PREVAIL!
FOR THE ARDENTA! FOR OUR META-EMPIRE! FOR THE EMPEROR!''”

Andromedan Grox Empire was a colony of Grox Empire set in Andromeda to reclaim the homeworld of the Grox, Attzery, get the Artifacts and, if possible, take over the whole galaxy.

Little is known about when and how the Grox have returned to Andromeda, but it is believed, from the vox transmissions found by Radeons, that they have been consolidating their power since the Annihilation, sent by the Meta-Emperor himself and using nightshade cloaking to hide their presence. Their main goal was to take over their former homeworld, Attzerry - the lost world that is not yet found by them.

When the dreaded Andromeda War has engulfed the galaxy, the Grox have seen this as an opportunity to expand. They have started their new crusade and their fleets have then appeared not only in the Core, but in other segmentums of Andromeda.

It turned out Grochius had a new, strange ally, who supplied him with ships and unknown energies. This gave him a nigh-impenetrable armada which was first launched to capture the artifact in the Starmaster Alliance space, annihilating it completely, with some scattered refugees left. Later, he turned on the newly-formed Andromedan Galactic Commonwealth. Against it, he used the strongest weapon ever known to the Grox: the ancient Mechovirus.

The first use of the virus at the Brood captal resulted in its near-complete destruction; later, more planets were infected, further empowering Grochius' dark rule. Nothing could stop the juggernaut of the Andromedan Grox Empire; in following days of the war, countless planets were overrun.

However, the Andromedan Galactic Commonwealth was supported with new allies. Firstly, it managed to strike an alliance with Delpha Coalition of Planets, drawing one of the sworn enemies of the Grox into the fray; using their tactics and weapons, the Grox attack was slowed slightly. Meanwhile, Jahric and his group of diplomats began gathering allies in Segmentum Umbra, where the Grox presence was negligible as well.

Eventually, the AGC and DCP found more information about the Mechovirus, and the ways it could be cured. The key to healing the infestation was found on the ancient planet Nocturnia. In an attempt to stop them, Grochius sent his largest ship, Kalenas Sates, to intercept the fleet heading to Nocturnia; however, it was destroyed by mysterious ships of unknown origin.

In the final days of the war, both the Grox and their enemies prepared for the final battle on planet Cathemera: ancient technology there, mixed with liquids found on Nocturnia, could be used to save the galaxy, and the last of the ancient artifacts in Andromeda was also there. In an epic battle in the core of Andromeda, the Commonwealth managed to defeat the Andromedan Grox Empire by beheading its leader, Grochius II. Shortly therafter, the Mechovirus was eliminated using the cure developed by DCP from what they found on Cathemera and Nocturnia, and the remainder of the Grox fled into other parts of the Gigaquadrant, most notably Kraw Galaxy.

The Andromedan Grox were the same as all Meta-Empire Grox, having no differences in biology whatsoever.

Andromedan Grox had their own unique military, different from that of other Meta-Empire. Instead of sending hordes of minions on their enemies, they used "Grox Battlesuits" - large, humanoid machines containing a Grox body and mind inside. Battlesuits were highly effective in combat, far better than any Dronox in battle and possessing higher intelligence and perception due to being piloted by Grox themselves. As there was no need in normal Grox foot soldiers due to these battlesuits, Andromedan Grox only used larger, "mecha" Dronox as battle tanks and walkers.

Andromedan Grox had all the technology of the Grox Meta-Empire, including immensely advanced weaponry, quantum replicators allowing the Andromedan Grox to freely produce whatever they need as long as there is enough energy, massive warships and other, deadly creations of the malevolent Grox minds.

AG Battlesuits, piloted by the Grox, were the common foot soldiers of the Andromedan Grox Empire. Stronger, more agile and more intelligent than common Dronox, Battlesuits are to be feared and admired.

Andromedan Dronox were powerful, giant warriors used for intimidation and to provide fire support. With their large power blades, they can even destroy tanks and buildings.

Andromedan Grox society was the same as that of other Grox Meta-Empire: based around single-minded devotion to extermination of the biological life and the Meta-Emperor. What makes the Andromedan Grox different was their belief in their destiny to rule Andromeda; they came from this galaxy before and once controlled most of it, and they believed with zeal no less than a zeal of a Radeon that they would do that again.

Andromedan Grox inhabited dead lifeless worlds, in a similar way to all other Grox, being extremophile organisms. However, with their battlesuits, they could settle on normal worlds as well, as their suits provided Grox with enough protection against the oxygen.

Andromedan Grox used the same vehicles, devices and weaponry as the normal Grox. 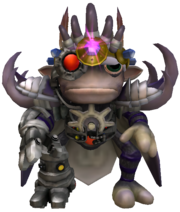 “BROTHERS AND SISTERS, TO ARMS!”

King Grochius II is the leader of the Andromedan Grox Empire: young, charismatic, and arguably insane, even more so after releasing the Mechovirus and his encasement in the Project Infinity. He draws his power and his fury from the ancient times of the old Grox Empire, his obsession with it going to the point he believes himself to be the reincarnation of one of the ancient Grox leaders.

However, Grochius is not all words and is more than willing to prove his worth in combat, fighting in his powerful unique techno-organic battlesuit, Project Infinity. A pinnacle of Grox technology, his suit is a weapon not to be trifled with, possessing lightning-fast reflexes and immense strength, as well as reality-warping weaponry. 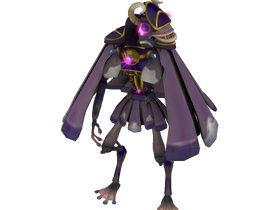 Coming from a species of Grox followers, Disdain serves as Grochius' assistant and advisor, taking control of the Grox armies and legions. A silent and brooding servant, his loyalty is to Grochius and Grochius alone, and he is even more amoral and brutal than his master, having no sympathy for his foes whatsoever. While Grochius dreams of the new Grox Empire and the revival of the ancient times, Disdain dreams of conquest, domination and murder.

True to his name, High Prophet of Disdain possesses psychic abilities; notably, precognition and telepathy. As such, he can intercept others' thoughts and visions, making all his subordinates extremely paranoid. While not a warrior, He has moderate skills with a blade and his psychic abilities are highly useful to the Grox cause. 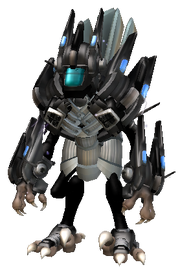 Drone 1-XX-4-N, known informally as Ixxan is a unique Dronox created specificially for leading Grochius' military campaign. His mind was supposed to be concentrated only on executing superiors' commands and lead the Grox armies; as such, his voice lacks emotion and he speaks in a robotic manner. With no personality whatsoever, he serves as Grochius' military executor, a very strong warrior and a loyal servant.

As the Andromeda War progressed, however, Ixxan began to develop a personality - an emotionless one, of course. Coldly logical and intelligent, he now also serves as a voice of reason, stopping Grochius when necessary. However, Grochius now fears that behind the cold mask of stoicism, Ixxan develops a new personality and might in fact plot against him.

“Leave, lower lifeform, or you would be exterminated.”

“The Grox are in Andromeda now. Spode save us all...”

“Of course you serve the Meta-Emperor better. We do not serve him at all...”

“My devotion is unending. I exist to serve. For Atzerry!”

“We escaped you once, eventually revenge will be ours. You cannot win.”

“A great threat to Uff'Wuj. Nothing is secondary to the emptying of the Grox. They are no longer just outsiders, they are obstacles! Obstacles deserve greater attention than outsiders!”

“Excellent creaturessss... you orchestrate my plans very well. Although... just one thing, I believe that you machines might soon be possibly reduced to broken instruments, I shall feed you to the Farxaeri if that would be so.”

“I've heard of these guys. I'm glad I'm in Exterioris and they're not. We've avoided them thus far - I don't want that to change”