Andaurl Ramdorian is a Serindia Lord, head of House Ramdorian he is seen as the Lord of the Mid-Colonial Sector and father of Creckbo, senator within the Goverment. This massive Serindia is a decendant of the ruler of the Green Serindia King and currently isn't always in agreement with the current Monarch, Empress Ramashe. He is a powerful and influential noble, with a private fleet at his disposal and the love of his people.

Anduarl Ramdorian was born in 215 BQF at the Rambo Capital, born among House Ramdorian he enjoyed a life of luxary and weatlh, able to study and prominent private institutes and over the years he found himself serving within Rambo Command with the starting rank of captain. Over the years he eventually reached the rank of rear-admiral and became head of the Rambo Command Intelligence Deparment (RCID), the department tasked with gathering and analyzing information concerning neighboring powers in the galaxy, and for carrying out covert investigations and operations regarding possible threats to Rambo Nation. Meanwhile his family migrated to the Mid-Colonial Sector and became the rulers over that vast and weatlhy sector within Rambo Nation.

He fathered a son, known as Creckbo in 52 BQF, during the Algernon War who eventually became the senator for the Mid-Colonial Sector. For years he continued to serve Rambo Command, though laid down his function when the Imperial Alliance managed to invade the Rambo Capital during the Second Galactic War in 0 BQF. During the war, the mid-colonial sector came under siege, his son in peril and his grandfather and father died during the battle of Rametru Nui. As such he decided to accept his position as Head of House Ramdorian and under his guidance the Mid-Colonial Sector began building it's own private fleet, consisting out of Columbia-class cruisers. During the occupation of his sector by the Confederacy of Allied Systems during the Great Cyrannus War, Andaurl slowly began losing faith in the Goverment of Rambo Nation as their inability to lift their occupation took a long time. Andaurl was disgusted when in 05 AQF the Galactic Empire of Cyrannus occupated Rambo Nation and placed it under their protectrate, though began respecting them after they helped rebuilding the damage done to the sector and planets by the Confederacy.

During the fifth month of 07 AQF, Andaurl attended the Rambo State Visit when Emperor Tyrómairon visited Empress Ramashe again in person. As a member of a Great House, he was pleased to visit Court again and was delighted to hear that the Emperor was going to tour various Rambo planets as well. After the meeting he joined the Emperor on his tour until they reached his homeworld, Rametru Nui were he hosted a great celebration in honor of the Emperor's visit. When the Emperor left for the Cyrannus Galaxy again, Andaurl remained at Rametru Nui, not pleased with a member of the Imperial Inquisition as Hand of the Monarch.

At 10 may 12 AQF, Andaurl Ramdorian, amongst others were present when Rambert Ramveral crowned himself High King of Rambo Nation after Lord Regent Rambarth Dino II Le Rambo had passed away due to old age in the night.

Andaurl Ramdorian is a cunning, clever and harsh person. As a member of House Ramdorian, he is noted for being brave and proud of their noble status. His time as rear-admiral of RCID made him a cunning, plotting and well aware how to play others to gain information. Adding his massive height and strenght beyond most normal Serindia, Andaurl is sight that radiates respect from others.

With a love for his people and children, Andaurl is loved by the people of Mid-Colonial Sector, and like him blame Rambo Nation for their inability to protect such a vital area during the Second and Great Cyrannus War.

Hailing from a noble family from the Capital, the long time sigil of House Ramdorian is a blue/purple Ram'Eris, her hands bound in a golden chain on a dark red background. Their motto: Water is rising! As a Lord, Andaurl Ramdorian also has his own guard, known as the Rametru Nui Guard, glad in yellow/green armor and wearing swords. Ships serving in his private fleet are known as the Columbia-class. 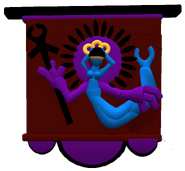 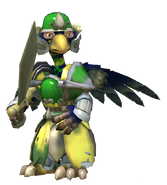 “We have to live together right?”

“Bent the knee or perish!”