Corrupted evolution of the Alvino

Destroyed
“For countless millennia, the Alvino have served as a great ally to our Empire. Trillions among trillions of them thrive across the arms of the galaxy, and their kind has become deeply intertwined with our own, for it is they that remind us to maintain empathy and to never forsake nature and its beauty. ... They are a kind race, and it is fortunate for us all, what with their power to adapt and shape both themselves and entire worlds, that they seek a passive and far less bloody order of galactic peace; may they serve as a pure, blessed beacon for the next hundred millennia to come, and let them never be unsullied.”

The Alvino Brood is the name given to the generations of Alvino who were biologically and psychologically warped into serving Regnatus and his Borealis Grox Empire. Following his ascension into godhood, the dreaded dreadnought used his terrible psychic abilities to force the formerly peaceful Alvino into servitude, causing them to warp into a race of biological killing machines devoid of emotion and individual thought.

During its existence, the Alvino Brood was the uncontested greatest power of the Western Arm of the Borealis Galaxy for most of its history, rivalled only by a few such as the Seireniar and Zarkhator, and all deemed a possible threat to the brood would eventually be consumed by it. The Brood finally met its end during the Second Borealis Galactic War, when the great organism which gave birth to the entire Alvino race was killed in battle, causing them to stop being created - an extremely significant victory in the new Polar Crystal Alliance's war against Regnatus.

The Alvino, one of the servant races of the Kormacvar, did not possess the concept of the Brood until Regnatus's ascension into godhood. As the Grox Empire's colonies in the galaxy transformed into the Borealis Grox Empire, so did the Alvino become corrupted and mentally dominated by Regnatus's indoctrinating influence, causing them to assume their modern forms roughly three billion years in the past. As they did so, they also begun creating armies of mutant drones to further empower the numbers under Regnatus's control.

The Brood would serve as Regnatus's eyes and fist in the Western Arm. Whenever a race was deemed suitable for consumption by the great dreadnought deity, the Alvino would be the first to attack, and should they be incapable of dealing with the enemies themselves, the Borealis Grox would intervene and unleash their full might upon their victims. The Alvino Brood is the main responsible for no race to ever have elevated to the Kormacvar's level following their extinction, with their crusades leading to the extinction of countless empires - as well as accidentally seeding planets with their spores and other microbes, some of which would eventually evolve into inhabited planets such as Macronormus as well as the creation of the Ganthorea. As time passed, the Alvino Brood begun adopting a more passive and defensive stance, ceasing attacks through the Arm and instead only retaliating against intruders in their territory.

The modern wars of the galaxy did not affect the Alvino, for the galaxy had become fearful of them and preferred to leave them alone. However, this changed with the sparking of the Second Borealis Galactic War, where Da Rogue Boyz begun launching raids on Alvino territory, provoking the locusts into leaving their defensive position and once again becoming active. The increasing activity of Regnatus during the war also led the Brood to begin launching strikes across the galaxy in what looked like an angered frenzy, leading to the extinction of races such as the Lamelota.

During the late stages of the war, the reformed Polar Crystal Alliance fought against the Alvino Brood for the purpose of weakening Regnatus's minions, eventually discovering their homeworld of Viniaris which housed Floridarixis, their Brood Mother. Following a massive space battle between the Alliance and the organic fleets of the Alvino, Floridarixis was killed, causing the Alvino to be deprived of their sole mean of reproduction and for them to flee en-mass to the Borealis Grox Empire to be used by their masters before they begun dying out. The defeat of Regnatus and the ascension of the Mechanic to his place restored the minds of the Alvino, bringing an end to the Brood as their freed people joined the Kormacvar Legacy.

The Alvino Brood was devoid of any government. Instead, its drones worked like a superorganism - neither the Alvino nor their mutants possessed any individual thought, and instead worked solely for the sake of the collective much like a colony of insects. There was no concept of leadership or individuality within the Brood save for the Brood Mother, who was recognized as the progenitor of the hive and therefore should be treated as such, and Regnatus, who was treated as the ultimate 'hive lord' by the collective Alvino, even though he rarely made direct contact with their race.

Alvino lived constantly working in order to maximize the efficiency of their conditions. Due to not possessing synthetic technology, they constructed continent-spanning cities of biological structures and plant life. Despite their vehement hostility, the worlds of the Alvino Brood were considered the most lush planets of Borealis, a consequence of their origins as the gardeners of the Kormacvar Empire. Resources were shared between the Alvino and mutant castes, with the central colonies focusing their efforts in maintaining the health of the Brood Mother while the outer territories kept watch for intruders.

The Alvino Brood did not use synthetic technology, but rather biological structures derived from old Kormacvar designs. Their buildings and objects all maintained a biological design, with many of them having life of their own, ranging from biological weapons to biological fleets of living spaceships. The Alvino Brood was well known across the galaxy for their energy weapons, which were always considered among the most powerful ground weaponry ever developed in the galaxy, capable of dissolving virtually any shielding and armor and reducing it to ashes in instants. The Alvino also made use of custom-made mutant hordes, some made from the genetic material from consumed races, who served as support in their battles against alien races. 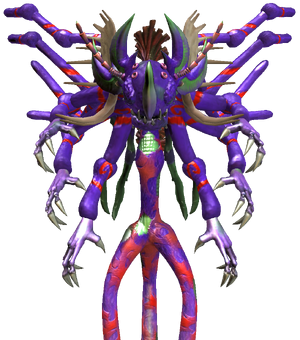 Floridarixis is the Brood Mother, the sole Alvino demigoddess capable of breeding more of her kind. Always considered the master of her people, she did not escape Regnatus's influence, which transformed her into a truly monstrous creature capable of breeding out hordes of abominations. Floridarixis was the greatest psychic in Borealis, second only to Regnatus himself, and her body was massive enough to cover a significant part of Viniaris's surface - only through her humongous psychic energies did she not get crushed under her own weight. Floridarixis died during the battle of Viniaris during the Second Great War, delivering a heavy blow to the Borealis Grox Empire, and following the Mechanic's ascension, she was recreated as her original self from before Regnatus's corruption affected her.