“"... Even they, the Almighty Kings of the Sky, were not exempt from it; the innate thirst for blood that drew forth the tendencies of murder, war, and, for the most foul and vile among their kind, hunger and lust for the flesh of their kin. As the clans and tribes across the world toiled and fought, reigned by dark lords and tyrants endowed with unnatural power, those who had once breathed life into us and forged our bodies sought to undo everything that ever was and ever would be... If our divine guides and lords could not spare themselves of their own innate thirst for blood, what ever hope was there that their spawn would not befall the same fate with time?”

The Aichatharna (High Zanatai Common: Eternal Lords of the World), otherwise known as Hathratane (Low Zanatai Common: Kings of Kings) were an ancient race of Essence-borne beings who once ruled the universe of the Zazane, and served as the Essentials of Descension Energy. The servants of the powerful god known as Vaxal Myraad, the Aichatharna possessed but one goal, that being to spread their unique power across the omniverse, using the Zazane as means for extrauniversal travel for they were otherwise bound to their native universe.

The Aichatharna were the uncontested masters of their domain, seeding their universe with life for the purpose of developing and evolving the perfect means to escape their universe and propagate their essence through reality. However, before their prime species - the Zazane - reached the necessary level of technological advancement, the Aichatharna were wiped out by the actions of a group of five siblings collectively known as the Accursed Quinquennium, who in an attempt to rebel against Vaxal Myraad, devoured all other Aichatharna and absorbed their souls into their own, forever corrupting Descension Energy into a destructive, near-demonic essence.

The Aichatharna are creations of Vaxal Myraad, the first Descension Energy being born at the dawn of his home universe. Originally a formless consciousness, Vaxal created the Aichatharna as physical vessels of his will before manifesting himself as one of their own once he became powerful enough to do so. Vaxal was an entity who demanded ultimate control over his universe and all that stemmed from him, leading the Aichatharna to become his servants rather than his equals as they begun seeding their universe with Descension-borne life - elemental energy was inexistent in their home universe, with Descension Energy serving as a twisted and alien, though otherwise neutral counterpart.

The Aichatharna ruled for billions of years, watching their universe grow and destroying all those who opposed their rule until Vaxal Myraad grew interest in spreading their unique power across the omniverse, and it was then that the god-beings discovered their greatest weakness: they were bound to their home universe, unable to create means to leave it. In order to achieve their goal, the Aichatharna begun creating races which would eventually evolve the technological marvels required for extrauniversal travel, and at that point, they would physically possess these races and travel across the universal barrier, freeing them from their prison. Their favored 'children' would become known as the Zazane.

The Aichatharna posed themselves as the rulers of the Zazane since their creation, with the famed Zazane ruler Zagdala Breek serving as a connection between the creators and their creations. At this point in history, however, Vaxal's rule found itself opposed by a group of five Aichatharna siblings; Utalasiel, Tahiziel, Tehedaz, Neroxael and Herezath, who in modern history are known by names such as the Accursed Quinquennium, the Five Sinners or the Five Gods. Rebelling against Vaxal's authority, the Accursed Quinquennium saw themselves as the epitome of the Aichatharna race and desired domination over their universe, contesting their god-creator over control of their race. When they saw themselves opposed by other Aichatharna, the Five Sinners initiated a terrible genocide of their own race, destroying their physical forms and devouring their souls as to empower themselves with them.

The destruction of the Aichatharna had catastrophical results; the very nature of Descension Energy found itself corrupted and twisted further into a malign thing by the Five Sinners' sheer malice, and their own universe found itself being slowly torn to shreds as the traitors' powers grew to such length that their very existence ruined reality around them. Vaxal Myraad saw his creation doomed, and in vengeance against the Five Sinners, forged the legendary Zazane Firesword which he used to strike each of the five siblings down, their consumed souls - alive but rendered feral and mad by their malevolence - spreading across reality as they were destroyed.

Descension Energy was permanently damaged by the treason of the Accursed Quinquennium, and in an attempt to save his creations, Vaxal Myraad sacrificed his form and shattered himself into millions of Essence-imbued pieces which clashed against the corrupted Descension, weakening it enough so that it would not cause the complete eradication of the Aichatharna's universe. But even after the sacrifice of its god, the Essence continued corrupted, with the maddened splinters of the Aichatharna coming to inhabit the bodies of those who manipulated the energy, becoming known as Kudalikra, or Demon Forms - when manipulating the corrupted Essence, these mad Aichatharna spirits would manifest themselves through a twisted, demonic version of the user. With the extinction of the god-race and the death of Zagdala Breek, the Aichatharna eventually became little more than myth among the Zazane, now cursed by the corrupted Essence of the Five Sinners, as they turned from direct reverence to Vaxal to revering the ideals and aspects he was said to embody.

The Aichatharna were not beings of flesh and blood, but rather Essence-born organisms made entirely of Descension Energy. There are few records of their physiology other than they manifested themselves as immense, draconic creatures who permeated an aura of terrible majesty. Even before Descension Energy was corrupted into its current form, the Aichatharna were said to be intimidating to behold, for they appeared as much greater versions of the Zazane - or rather, the Zazane were molded into lesser versions of the Aichatharna. As a god-race born directly from Vaxal Myraad's mind, the Aichatharna were genderless and naturally identical in appearance unless they chose to make themselves distinct for any reason.

As aspects of Vaxal Myraad, the Aichatharna were largely unconcerned for the needs of those considered below them as they focused on maintaining full control over their home universe. Rebellion was considered the greatest sin of their people, hence why the Accursed Quinquennium came to be such contrasts to their race, enough that it corrupted the very essence that composed them. While the Aichatharna seeded much of their universe with life, both directly and indirectly, they made no effort in assisting the evolution of their 'children' and instead watched whether they could evolve and adapt by themselves; failure was considered a weakness, and those who could not survive were deemed unfitting to serve as the Aichatharna's vessels in their planned extrauniversal exodus.

As the fundamental race of Descension Energy, the Aichatharna were considered Sources of Sin and had full control over the Essence, which they used to manipulate the laws of their universe and create lifeforms out of nothingness. It should be noted that, during their existence, Descension Energy lacked many of its current violent and destructive-induced side effects, being an effectively neutral counterpart to the more known Elemental Energy in their universe. It was through the sheer malice of the Accursed Quinquennium that Descension Energy was corrupted into what it is today. 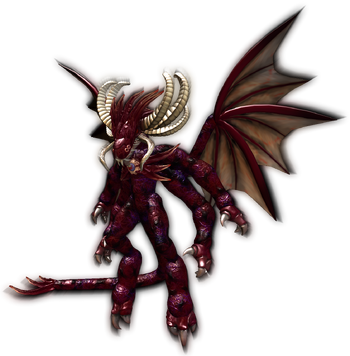 “Do not stand to oppose me and dare not resist my order, for if I, a god that stands above gods, have moulded and forged your existence, then it is not beyond my power to rend and crush you back to nothing...”

Vaxal Myraad (High Zanatai Common: Black Father of the Totality of Life) was the Essential God of Descension and the creator of the Aichatharna. An entity of unrivalled power in his home universe, he was the ultimate source of the Essence from which his universe evolved from. Vaxal's desire was to spread the young Descension across the omniverse, ordering the creation of the Zazane as vessels for their exodus until his plans were foiled by the rebellion of the Accursed Quinquennium. To save his universe from annihilation, Vaxal shattered himself into countless pieces, most of them which have never been found.

“They were kings and shit. Oh well.”

“Towards the natural state of being; all things descend. Conflict arises; harmony cannot exist. By illogical design, the creation rebels against its intention.”