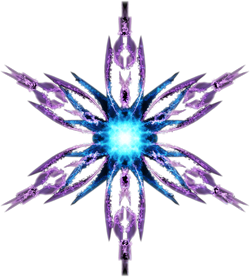 Eternal
“Eupherion is unique, everybody knows that. The physical uniqueness of the galaxy is one way you could put it, but there’s something else. For all of us Essence-attuned individuals, the most sensitive of us feel a drone. When all is quiet, when the most powerful of us meditate, and the universe itself calms, there is a deafening silence, a drone in the background. The remains of a presence, a psionic presence as faint and as likeable as the background radiation left from when the universe itself burned into existence. Something called Eupherion home long before the precursor races did, but their name has been lost to time. Whatever they were, their impact was such that Eupherion has an imprint on her very soul.

Scholars call them the Aeon Enigmas, and they’re the greatest gap in our knowledge of our home. Who were the Enigmas? Where did they go? When did they live? Some questions might never be answered.”

The Aeon Enigmas, also known within the occasional scholarly sect as the First Wayfarers, were an ancient order of enlightened, hyperadvanced Ultraterrestrials who held dominion over the entirety of the Eupherion galaxy approximately 12 billion years ago. The actions of the Enigmas, though seldom seen throughout the wider Gigaquadrant (their far more influential Zhulultu contemporaries held dominion over the Gigaquadrant) would leave an eternal impact through the Eupherion galaxy and its evolution, with the touch of the Enigmas changing the very fabric of reality. The Enigmas are immortal, extradimensional beings that first appeared in the universe shortly after the Big Bang, with the conditions of the particle era being perfect for the Enigmas; once the universe began to cool, the Enigmas coalesced gravity and matter together to form the Eupherion galaxy and give life to its stars, forming the supermassive black hole at its center and using the singularity at its core as their home.

The Enigmas were known to have kept to themselves; rarely extending their influence outside of Eupherion, a characteristic often attributed to the Enigmas purposefully going out of their way to avoid the Zhulultu. Most, if not all, of the planets of Eupherion were shaped by them and given the seeds of life, and the Enigmas directly influenced the growth of the first lifeforms in Eupherion. The eventual decline of Enigma influence began to occur approximately 2 billion years ago, and by the time the first Ozax appeared in the galaxy, the Enigmas had long retreated to the galactic center of Eupherion and disappeared entirely. The fate of the Aeon Enigmas is unknown, but it’s generally believed by those who know of their existence that they departed for another universe to build a second home, possibly retreating from the presence of the Ozax.

The Aeon Enigmas originated in an extradimensional plane of existence; in their home universe, the laws of physics meant that the universe never began to cool and thus remained a “soup” of elementary particles. The Aeon Enigmas originated as quark-based lifeforms, their technology being based off of the application of Psionic energy and changing the laws of reality in their home universe to suit their needs. The origin of the Enigma’s hyperadvanced technology is unknown, but in the time that the Enigmas inhabited their home universe, it’s generally thought that the Enigmas derived everything from Essence or an unknown benefactor. The Enigmas had inhabited their universe for billions of years comparatively peacefully - the Enigmas had no concept of warfare, social division, or any cultural problem. They were, despite their alien intelligences and complex nature as quark lifeforms, rather simple in their lifestyle; they were rather content to exist, the unique laws of their home universe meaning there were no requirements (or capabilities) to create structures or cause great change.

The waning years of the Enigma’s home universe began when a tear in space-time occurred through the Khi'anriax, causing copious amounts of the chaotic Aberric energy began to flow into the universe. The properties of Aberric Energy meant that wherever the energy touched the Enigma’s home universe, the space around it began to cool, forming the quarks into atoms and imposing thermodynamic laws on a universe that previously knew no such laws. The laws of thermodynamics were antithesis to the Aeon Enigmas - formerly immortal, the touch of Aberric Energy caused their bodies to radiate energy and forcefully cool into atoms, causing rapid death in any unfortunate to come into contact with the power. The survivors of the Aeon Enigmas at this time had all their immortality stolen away, their bodies now permanently radiating energy and thus being forced to stay in specialized Essence-crafted shell-like bodies to keep their energies intact for survival.

Naturally, the Enigmas and the Khi'anriax came into direct conflict; the Khi'anriax were directly threatening the home of the Enigmas and killing off vast amounts of their kind. Despite their best efforts, the Enigmas were incapable of preventing Marrow from absorbing their universe and forcing it to cool entirely. The few Aeon Enigmas remaining were forced to latch onto cosmic strings in the rapid cooling and aging of their dying universe, using these cosmic strings to travel to different universes in the earliest eras of the birth of these new universes to keep as new homes. The Aeon Enigmas brought their technology with them through each universe, carrying with them their special Neural Physics-based hyperadvanced hybrid technology that lent them their status as Ultraterrestrial. The experience of new universes, with new laws of physics, were entirely alien to the Enigmas, though the ability to truly create(something that was prohibited by their previous universe) was something new yet welcome to the Enigmas. Within every universe they inhabitated, they created supermassive black holes to inhabit, the extreme environments within the singularities being the closest equivalent the Enigmas have to their original home. The Enigmas would coalesce galaxies around their homes over millions of years; seeding life on billions of worlds and steadily manufacturing their evolution. One of these galaxies would be the Eupherion Galaxy.

The Enigmas have existed since then for unknown amounts of time; it's entirely possible their age is eternal - the Aeon Enigmas have mastered the arts of dimensional manipulation, whether spatial or temporal, and actively utilize time travel. They are capable of manipulating forces such as gravity to create localized time distortions, slowing or speeding time at their leisure. And despite their considerable technological power, the Aeon Enigmas are rarely every seen or interacted with directly, if ever; there has been no known sighting of an Aeon Enigma for billions of years, and yet their influence can be felt through their inventions in the Eupherion Galaxy, the Ilacairen, and the Dreamweave, their three most prominent and permanent legacies within the First Gigaquadrant. The Aeon Enigmas have spent, and continue to spend, their existence fighting the forces of Chaos in the Timeless War, their deepest enemies being the endless hordes of Marrow that they spent all effort to contain; the greatest of their influence is regarded as their ability to single-handedly hold back the Ozax in Marrow, keeping the forces of Chaos far more manageable for the Four Pillars.

The Enigmas wrote in a primarily pictographic language, with symbols of varying colors depicting words, objects, and entities. The Enigmas arranged their symbols primarily right to left, and arranged the symbols to be read from top to bottom. The symbols of the Enigmas were considered to be particularly beautiful, with vivid colors and sweeping lines that were often considered to be art in other races. The spoken Enigma language was unique - the Enigmas rarely spoke words to each other, rather, the Enigma language was musical in nature, and they “spoke” in various singing pitches and songs. Non-Enigmas were incapable of understanding the Enigma language, as the musical notes had also carried along information in the form of Essence and telepathy, allowing the Enigmas to fully understand each other’s songs.