There are parts packs, which can be used with either Spore or Spore Creature Creator. Parts Packs include new body parts for creatures in the Creature Creator, as well as paint scripts, preview animations, and test drive backgrounds. The only purchasable Parts Pack is Spore Creepy & Cute. Expansion Packs (not to be confused with Parts Packs) increase gameplay depth, adds new features like creators and stages (not in the current ones). Expansion Packs can only be played with the original game or the special box (same game, just with extras in the box). The only expansion pack is Spore Galactic Adventures. 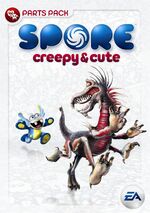 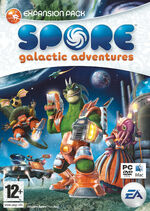 Bots Part Pack is a limited-edition add-on that adds 14 new cybernetic parts to the Creature Creator. The code that will unlock the content can only be found on specially marked Dr. Pepper bottles in the United States. This was announced on the Sporepedia on January 5th, 2010. The promotion was originally going to end on December 31, 2010, but was extended to January 31st, 2012.