"Draw crop circles near cities and tribes to interact with them."

The Crop Circle tool creates a random brown pattern wherever it is activated.

Actual effects upon tribes and civilizations are unknown, but crop circles appear to do nothing except attracting a group of people to worship it (but eventually all the worshipers will go into an extreme panic and will start running away). The attractive effect of crop circles can sometimes be useful, such as when you need to abduct a member of a civilization but can't find one. However, it has been rumored that if the worshipers are in Tribal Stage, they might leave a gift on the crop circle if you leave the planet before they go into a panic.

Despite previous speculation, Crop Circles are NOT necessary to ensure creatures uplifted by a Monolith will be friendly with you. The action of uplifting them already gives you a +50 relationship bonus. Using Crop Circles does not affect your relationship with them in any way.(In fact, using a Crop Circle outside a space empire's city, and thus making the citizens eventually freak out after they've finished worshiping it, may reduce your relationship level by over -20 points for "Frightening our citizens" and will also cause the empire's ships to immediately attack you, even if you're allied with them.

In Creature stage crop circles can be found near the 3rd Home Nest. Crop circles seem to symbolize the space stage, because they show what appears to be star systems and formations, plus, in creature stage, when you stand on the outer edge of the curving crescent moon in the circle the camera will shift to a position where it will appear that you are looking directly through the eyes of your creature, and the camera will shoot up and point directly upwards, towards space.

This tool uses your ship's energy.


This requires the Traveler 1 or the Zoologist 1 badge.

This tool can be purchased in the following locations: 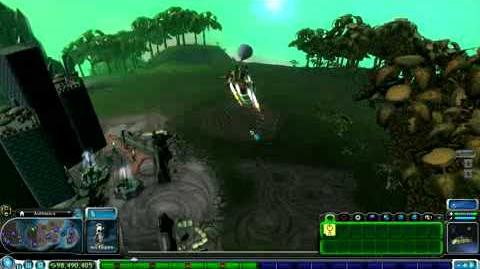