The Creature Stage is the second stage in Spore, and takes place in a third-person 3D format.

The main goal of the Creature Stage is to gain DNA points by befriending or hunting other species, while gradually increasing the brain size of the player's creature. The Creature Stage ends when the creature reaches sapience and the player advances to the following stage. The player has the ability to unlock parts that are essential for hunting or socialization; most parts have abilities useful to these strategies, and in addition, the creature has one consequence ability gained by the player's strategy in the Cell Stage. Each increase in brain size will gain one space to add a member to the player's pack, and there can be up to three spaces. The creatures in the player's pack can make it easier to befriend or attack other creatures. The player can use this as part of a long-term goal for determining the consequence abilities in future stages, based on hunting or befriending other species, or a balance between the two.

Before entering this stage, the player has a chance to edit their cell into a proper creature, albeit with cell parts. The player can add legs or create a slug. The parts you choose for your creature will decide which base parts you unlock. Similarly, the base parts you use the most will increase your chances of unlocking an upgraded version of that part.

The abilities of the creature depend on the parts added in the Creature Editor. There are 4 combat abilities, 4 social abilities, and 5 movement abilities.

What mouths you can use is determined by your consequence trait from the cell stage.

Creatures can deal with other species by befriending them or exterminating them. Some species are naturally hostile (red angry face) and cannot be befriended unless you use Siren Song. Every time a creature is befriended or killed your creature gains DNA. Once you have befriended 3 of the species or rendered them extinct, you will gain extra DNA. If you hunted those creatures they will become extinct and no longer appear in your game. If you befriended the creatures, you can recruit them for your pack if your brain is large enough. Either way, you may rest at the creatures' nest to restore health.

Another lesser-known way to gain DNA is by eating the eggs of other creatures. This also takes care of creatures hunger but also results in angering the nest you ate the egg from.

For creatures who do not want to kill all the surrounding creatures, they can eat eggs and run, which will give them DNA and keep any one species from becoming extinct. This makes it easy for carnivores to make friends while still maintaining their diet and only making one (or eating from an already hostile group) nest of enemies. Strangely, herbivores can also eat eggs and gain this benefit.

Also, by using this method, you can effectively neither befriend or extinct any species and gain all your needed DNA through eggs by playing an egg eating race. High sneak and sprint, however, is useful for this method as creatures often attack you when they notice you eating their eggs.

Like killing a Baby Creature, stealing an egg will instantly put your relations at hatred if the creature is neutral or lower, causing the entire nest to attack you. However, if you befriend two creatures from the nest first, they will not attack you. (Do not befriend a third creature yet: that will ally said creature, and you won't be able to eat their eggs at all.)

At some stage, the player's species will migrate to another part of the continent; reuniting with them will give you DNA points.

After gaining a certain amount of DNA your creature's brain will increase in size. After the first increase in size, you can use social skills to persuade other creatures to join your pack.

The maximum amount of creatures you can have in your pack increases by 1 each time your brain increases, near the end of the stage you can have 3 creatures in your pack. After a creature's brain becomes big enough and they become sapient, the player can enter the Tribal Stage.

Also, as your creature's brain gets bigger, their maximum health level will increase, allowing them to survive fights against tougher creatures. They also appear to grow larger.

To start with, the player cannot befriend a hostile species (represented by an angry red face) unless the player utilizes Siren Song consequence ability to gain allowance to socialize with species temporarily. The relationship of species must range at "annoyed" (as shown with angry orange face) or higher to be befriendable.

The socialization with species can be accomplished by approaching said species, entering the social stance, clicking on it, and asking to socialize. A semicircle divided by bars will appear, with the relationship of the species above it.

After successfully impressing the creature, that creature will be befriended and have a yellow star surrounding the relationship face. Trying to ask that creature to socialize won't start the socialization process. Befriending nest creatures 2 times will convert them to friends (blue smiley face), and 3 times to allies (green smiley face). Additionally, allies can be also added to the player's pack by socializing with them if there's any room left.

Befriending different types of creatures have their own unique effects; befriending alphas will give the player a new part, but takes longer since there's more sections of the semicircle in the socialization process, and hardest of all, rogues will award 100 DNA. However, epic creatures cannot be socialized under any circumstances, but can be instantly allied if the player befriended the epic's equivalent species. However, the chances of finding a species as a normal creature and an Epic are very low, considering how many creatures there are.

Sometimes in Creature Stage, one of several events may occur. Major events cause a more intense version of the battle music to play, and nearby creatures will flee in terror.

Preparing for the Tribal Stage[]

The following table lists the consequence abilities given by the different types of victory in the Creature Stage. 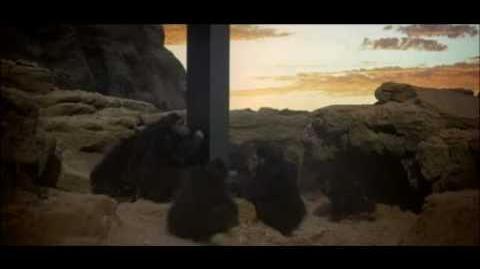