“To build the creatures, you are starting out with parts. We have seven part categories -- feet, mouth, weapons… Each category has four columns of parts, and each column has eight or nine choices. As your brain level increases, you unlock more columns. All in all we have about 400 creature parts. Each of these parts also has morphs.”

The Creature Creator (known as Creature Editor before it was changed in the final game) is a type of creature creator appeared in Spore series that allows players to create and modify creatures. Creatures consist of a malleable body with an underlying spine, which can be sculpted in a variety of ways. Any of 228 functional parts can then be added onto the body, and be reshaped themselves.

The Creature Creator impressed fans so much that many petitions began to spring up, including this one from Petition Online. The concept of releasing a module from a game to serve as its demo, sometimes months ahead of its release, is not unknown. Peter Molyneux's The Movies' Starmaker and Wright's own The Sims 2's Body Shop modules are both example of such a demo release.

The interface of the Creature Creator is organized into three portions:

This section is a stub. You can help SporeWiki by expanding it.

The Paint Mode is an integral part of the Creature Creator and operates on the simple premise of selecting a color and texture, which the computer will then procedurally apply to the creature. In addition to the basic texture, three levels of overlay are available for things such as Base, Coat, and Detail.

The Testing Drive is a small arena in which the created creature is brought to life. Here the player can preview animations example of movement, action, etc. The player can also change background, add babies, screenshot, and record the creature.

In the current version of the creator, the various statistics of the creature are displayed as icons on the right side of the screen with numbers indicating the skill in that field.

To the left of the Editing screen are the seven palettes (categories) containing 228 functional parts that can be attached to a creature. Each palette contains up to four columns with up to ten parts in each.

In the Creature Stage, parts are unlocked by rummaging through skeletons, and killing or befriending alphas.

The editing interface also includes, in the bottom left, an indicator of the amount of evolutionary credits (DNA points) currently available to the player for use in creature creating. All creature parts have an associated cost, which reflects their efficiency and effect on the creature's rating. The further to the right a creature part appears in the list that opens on clicking a category button, the more expensive it is to buy and the higher level ability it offers (in most cases).

Lastly, in the bottom right there are buttons for Undo, Redo and Exit, and the name of the creature in the top right, next to the ranking.

It has been confirmed that there will be new creature parts in post-release Add-ons. One has been released so far, named Spore Creepy & Cute Parts Pack. Contrary to the name, however, it has three themes: Cute, Goofy, and Creepy. There was speculation that the Galactic Adventures would have new parts, however, it is now known that the expansion has no new Creature Editor parts, but does have a new Captain Outfitter with all the Outfitter clothes and 32 new Captain Parts. However, the Creature Editor does have a new paint option for creatures that will be turned into Captains. This paint job is a parody of the Red Shirt from Star Trek.

Barrakuda mentions that Will Wright would like to have robotic parts in the Creature Creator after advancing to the Space Stage, possibly as a result of research in the game.[1]

Between January 5, 2010 and December 31, 2010, as part of a partnership with Dr. Pepper and Electronic Arts, players could enter a code from a bottle or cup to get 14 new robot parts for the Creature Creator.

The Creature Editor in GDC 2007

The texturing tools in GDC 2007

Here are a few examples of creatures that have been made in the creator, showing the incredible range of styles that are available to the player. 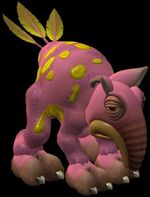 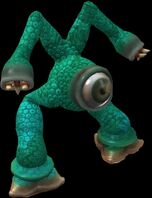 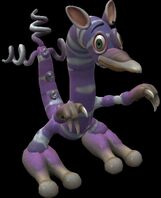 Debug Squid, the first creature made when the skin script was first being made

A group picture of creatures that were created in the editor