“My people is one of many hardships. Forced to serve to survive. But no more. We are free, we are mighty, and we are invincible. All who stand before the Zua-Zaoi and the ones who granted them new life will be destroyed! Their carcasses will be tossed into the ever-growing pile of bodies we make out of our enemies and rivals! Zua-Zaoi eternal!”

The Zua-Zaoi are a race of vaguely humanoid arthropods natives of Planet Croth, located at the distant reaches of the Mirus Galaxy. A race with a history of violence and conflict, they are unified under the rule of their immortal warlord Vouinas in servitude of the Corruptus and the Dominion of the Xhodocto, and they are more than eager to prove them as the greater servants of their masters through tactical thinking and superior firepower.

While the Zua-Zaoi have since left the Mirus Galaxy, they remain a noticeable force in Gigaquadrantic affairs, pledging their support and their armies to the demons of the Corruptus. Very familiar with the environment of war and bloodshed, the Zua-Zaoi have built their culture and legacy from conflict and are not afraid to display their might to their enemies. All who stand before the might of the New Zua-Zaoi Empire, or worse, attempt against their freedom, will pay with a fate worse than death.

Little is known about the Zua-Zaoi's prespacefaring times, their old history long lost in their original empire's destruction, though what is known is that they evolved in the arid world of Croth and became a notable presence in their home sector, initiating an expansionist march which led to the enslavement of any who got in their way. At around 1,300 AD, the Zua-Zaoi warlord Vouinas was born and led the empire to a grander degree than any other predecessors, making the Zua-Zaoi one of the most powerful factions of their region until they encountered the race known as the Narix.

The Narix war was the turning point in Zua-Zaoi as they end up losing the war and becoming slaves. The Narix war started as the Narix Empire's response to Zua-Zaoi aggression in their home sector. Both empires where about equally matched in turns of technology and combat skills so it all came down to tactical superiority. At first, with Vouinas' tactical brilliance the Zua-Zaoi was able to get the upper hand on the Narix for a while before something went wrong. While Vouinas was busy leading organizing assaults in Narix territory he trusted a close friend to make sure the home defenses where tight. As it would turn out his 'friend' was a servery incompetent tactician and left several important shipyards and colonies vulnerable to invasion. Of course as soon as the Narix learned of this they launched an attack. Now with their most important shipyards and economic worlds in enemy hands the Zua-Zaoi stood little chance as the Narix forces steamrolled into Croth. After three weeks of fighting the Narix was able to defeat and imprison Vouinas and turn their homeworld into a molten ball. After that the Zua-Zaoi lost the will to fight and surrendered to the Narix.

After the Zua-Zaoi surrendered the Narix wasted no time rounding up every last Zua-Zaoi and enslaving them. The Narix where hard and cruel taskmasters and would try at every opportunity to break the will of the Zua-Zaoi. The Narix no matter how hard they tried was never able to break the Zua-Zaoi. The Zua-Zaoi attempted several attempts to overthrow the Narix but failed every time and ended up be severely punished for there disobedience. The Zua-Zaoi spent around 900 years enslaved to the Narix before the empire finally fell into anarchy and they was able to escape. After the Narix Empire fell the Zua-Zaoi reunited and formed a loosely connected feudal empire called the Zua-Zaoi Connection. The connection used leftover technology left behind by the Narix to create ships, tanks, and weapons. The Zua-Zaoi settled in hundreds of systems but it was only a matter of time before things went for the worst. Before long the feudal Zua-Zaoi warlords began to fight among themselves and after that the Connection fell apart at the seams. For a long time, there were hundreds of planetary warlords trying to get dominance over the Zua-Zaoi or just maintain control of their own world.

When Vouinas returned, now as a servant of Shu'wokerama and the Corruptus, he used his new demonic powers to unite the race under his rule once more by a combination of strength, diplomacy and sheer influence during the event known as the Zua-Zaoi Reunification. The now reborn New Zua-Zaoi Empire became a protectorate of the Corruptus and the Dominion of the Xhodocto, left Mirus to inhabit the Dominion's territory of Andromeda and became a force to be feared.

The Zua-Zaoi are arthropod, insectoid aliens who vaguely resemble cockroaches. They sport a gray and black fur across their bodies and three thick antennae on their heads, which face backwards while a powerful mandible faces forward, protected by exoskeletal plates located on its sides. They possess two pair of wings which allow them to fly for limited amounts of time and a total of six limbs, with a pair of legs and two pairs of arms, one much larger than the other. They possess large, spiked clubs at the end of their tails made out of thick plates, with the clubs on females being slightly more rounded rather than pointed.

The Zua-Zaoi are a proud race who values its own power over most other things, believing themselves as the grandest warriors of the universe. They abhor their own past serving under the Narix and prefer to look forward to the future instead, with most members of the race possessing a great desire for the domination of the stars. Naturally aggressive and with a love for combat, the Zua-Zaoi are perfect warriors in the eyes of the Corruptus, who are seen by the insectoids not as religious deities but rather as figures to be followed for a prosperous future. Most Zua-Zaoi see no reason to fear the demons of the Corruptus, instead coming to enjoy the benefits they receive by working alongside them.

In physical terms, the Zua-Zaoi are roughly as strong as human adults though they possess numerous biological advantages. Their claws are sharpened and made for ripping prey apart, while their powerful tail clubs can deliver blows hard enough to shatter the exoskeletons of other Zua-Zaoi. Despite their height, they are quite light in weight and can fly by rapidly beating their pairs of wings, though their stamina is often low unless the individual has gone through intense training, and most Zua-Zaoi cannot fly for more than a few minutes. The Zua-Zaoi can also affect each other's psyches through series of pheromones released through glands on their backs which turn all other Zua-Zaoi in the vicinity more vicious and fearless, making them more capable soldiers. These pheromones are spread through the air by the beating of their wings, and an army of Zua-Zaoi beating their wings in unison means they are preparing themselves to ensure a violent rush against their opponents. 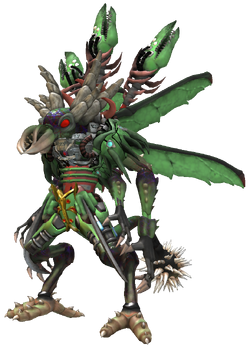 “I lead my people once more, now under the rule of demon gods. What hope do you stand before me?”

Vouinas, the Dark Warlord, is the current leader of the Zua-Zaoi and one of the Vanguards of Shu'wokerama, one of the demon gods of the Corruptus. The leader of the previous empire before his defeat at the hands of the Narix, he was rescued by the demons of nightmare and turned into a warrior of immense power who proceeded to unify his race under his rule once again. A tactical genius and highly commendable general, Vouinas brings total military domination in the name of the Corruptus, often leaving little if any survivors on his wake.

“Brawlers and soldiers rather than warriors, yet the Dark Warlord guides them with the same grace he does his blades; with tact and surprising cunning. Yes, I can see the parallels between my kind and theirs. Brothers, I may go as far to say...”

“The trumpets have sounded. The seals have been opened! Let the Locusts of the Devourer come - their breastplates as breastplates of iron, their teeth as the teeth of lions, and the sound of their wings as the sound of chariots marching to war! Take peace from the earth! Go forth conquering, and to conquer!”

“I do admire the ever-increasing desire of the Zua-Zaoi to further their self-value. I believe it will be beneficial in the long term.”