“The people of Zoleia strive for one thing: order. Our goal? An utopia. It may sound like madness, but it is through this mindset that we go on, that we progress and that we survive. Of course, an utopia is an impossibility, but the Zoles do their best to get as close to it as physically possible. We march forward so that one day, Borealis is a good place to live in.”

The Zoles are a race of draconic reptilians native of Planet Zoleia, located at the namesake sector of Zoleia in the Borealis Galaxy's Western Arm. A people with a culture focused on the mindsets of order and honour, they are the self-proclaimed paragons of the galaxy who make efforts to pacify it on its entirely, with the ultimate goal of having it a safe place for all races to inhabit and evolve in without the fear of oppression, be it from space criminals to malevolent empires.

The Zoles are without much doubt the 'face' of Borealis in international affairs, having become the most influential people of its modernity through the actions of their spacefaring nation, the Zoles Imperium. Benevolent, just and righteous, the Zoles are the protectors of their home stars and will use all resources available to them to keep it defended from all threats, be them internal or external.

The Zoles and their subspecies, the Nilito, descend from powerful flying predators natives of the mountainous ranges of Zoleia and achieved sapience roughly at the same time. In ancient times, the Zoles were considerably aggressive creatures and notably enslaved the Nilito during the two races's equivalent of the middle ages, and the latter were not able to become independent until the Zoles became sufficiently sophisticated. At around the year 25,000 BC, the first spacefaring nation of the Zoles and Nilito was formed under the name of Zoleia Empire, which promptly initiated a campaign of expansion around their home sector.

At first the Zoleia Empire retained the aggressive mindset of the old rulers of the homeworld, though numerous political reforms eventually led to the empire becoming progressively more accepting to aliens until it finally realized the advantages of having alliances and friends outside of their own sphere of influence. The Heleanorians and the Samilinus would become the oldest and closest friends of the Zoleia Empire for the remainder of its existence, which ended at the Earth year 225 AD when the Zoles monarch known as Telarian Zulouar reformed the empire into the Zoles Imperium. The Zoles people accepted the idea of seeking an utopia as their ultimate goal and have lived since then striving to get as close as possible to it.

Zoles are very tall, draconian creatures. Their skin has a characteristic shade of purple with a combination of both orange and black stripes around their torsos and limbs. Their heads have a scaly crest around it, and their eyes are notably located in stalks above their foreheads. This stalk can turn 360º, giving a Zoles vision across its surroundings much easier than most other creatures. At the same time, this stalk is incredibly vulnerable to damage due to how it is shaped, being an easy target for enemies. They also possess a pair of curved horns on the back of their heads. Zoles possess strong claws on their hands and feet which they use to grip on their prey and run at fast speeds. While they possess a pair of wings, these are vestigial organs, and the current Zoles are too heavy to fly with them. At the tip of their tails, the Zoles possess an organ which creates poison.

The Zoles evolved from predatory creatures and as such, when they arrived at space, they at first preferred to work through force. However, as time passed, they have evolved into noble, welcoming creatures. Zoles are extremely proud beings and have a high regard for their culture, which makes them appear "posh" by other Borealis Galaxy beings. Zoles also put great value on their allies, considering treason one of the most horrible sins of their people. The species' society evolved in such a way that Zoles immediately seek to make things as orderly as possible, looking down on races who do not respect laws or cause destruction for no specific reason.

Zoles are physically strong creatures. They can attack enemies with punches or use their claws to rip them apart, or use their legs to kick and use their feet to dig their talons at their enemies. A Zoles can infect other creatures through its bite, their poison being capable to go through the enemy's bloodstream and cause extreme internal irritation. A Zoles' poison also runs through its own bloodstream, causing predators to be poisoned if they attempt to attack them. The Zoles themselves are, of course, immune to their own poison. 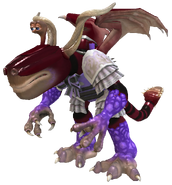 “For Borealis to strive, we must work together.”

King Rebaris Zulouar IV was one of the most recent rulers of the Zoles Imperium and one of the most influent figures of the Borealis Galaxy's modern history. He was always noted for his good humour, being considerably hard to annoy or anger, often finding attempts to do so more amusing than anything. His great wisdom meant that rulers of other empires, including even the Councillors of the Polar Crystal Alliance, came to him for advice regarding complicated matters. Rebaris was extremely adamant about his beliefs and was very determinated, with Volim and Falrik Zaarkhun learning how hard it was to mentally break him despite his advanced age.

“You look interesting, alien. Let me touch your face. Yes, I'm being serious.”

Queen Aldaren is the wife of King Rebaris and aids him as the rule of the Zoles Imperium. An absent minded but proud and posh Zoles, Aldaren is much more energetic than her husband and is often found to be "weird" compared to him. However, despite this seemingly strange exterior, Aldaren is a very intelligent leader who has no patience for failure or nonsense. Aldaren is known to have a big grudge against the Wranploer and is an oppositor to them joining the Polar Crystal Alliance, seeing them as a threat. Only time will tell if she will change her mind or be proven right. 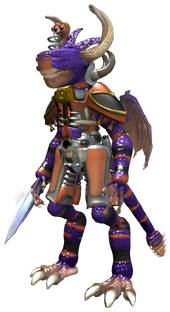 “No pirate or outlawer will go unpunished while I'm here.”

Vekaron is the very first member of the Penumbra Unit, formerly one of the Grand-Commandants of the Zoles Imperium. He was chosen by the Council for acting like a leading figure for the galaxy during the Second Borealis Galactic War, being directly responsible for the membership of various members of the Polar Crystal Alliance and for his heroic acts in its name. Vekaron is a man of very strong ideals who fights for the prosperity of the Alliance and his species. Despite no longer being required to serve under the Zoles Imperium, Vekaron is still seen with very high regard by them, and the Alliance as a whole consider the Zoles one of their greatest heroes due to his victories against the likes of Vorius and Torrent.

“Vekaron was only one of four. He might have been promoted, but remember, the Imperium isn't any less defended now.”

Asraels is one of the currently active Grand-Commandants of the Zoles Imperium, having control over all of the empire's space navy. A man of many battles, Asraels is considerably older and more experienced than Vekaron, but due to the latter's fame, he feels like Vekaron overshadows him. Despite this, Asraels is no less important than Vekaron was. During the Second Borealis War, Asraels was directly responsible for the Elzie Empire and the Herame Republic joining the Polar Crystal Alliance. To this day, the Imperium still sees him with very high regard. 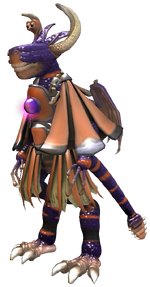 “We will not fall again.”

Semirian is one of the current councillors of the Polar Crystal Alliance. Formerly a minister of the Zoles Imperium, she appointed by King Rebaris to represent the Imperium as its councillor in the Alliance. Semirian has extensive knowledge of the previous Polar Crystal Alliance and as such, has studied its flaws so she may not repeat them. She also has a strong sense of discipline, and a very stoic attitude. She was notably involved in a kidnapping by the Wranploer Billig Oltauris until she was rescued by Xerkea, Zr'Ahgloth, Corteus and Keldar. 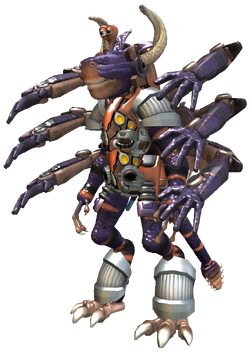 Chahenthras was a Zoles who served as a lieutenant of Dark Grip. Born and raised within an exiled clan of Zoles traitors, Chahenthras was the last of her kind after she had witnessed the merciless execution of her family in her younger days. Chahenthras was regarded as an expert in terms of her engineering feats and intelligence-gathering skills, often used as a means to gather information for Torrent rather than fight on the frontlines, and fought using multiple cybernetic limbs that stemmed from her back alongside a multi-bladed polearm when she was exposed in the open. She was not afraid to manipulate and deceive enemies when necessary and enjoyed watching her enemies, specifically Zoles of the Imperium, suffer - in contrast, she desired a liberated galaxy, free of empires where people were allowed to live as they pleased as long as they were willing to fight and die for it. Due to her nature as a Zoles she was often abused by Torrent and others, and was commonly regarded as the weakest of Dark Grip's lieutenants.

“As my species sought order and stability in our own galaxy, so too do the Zoles seek such in their own galaxy. I believe I speak for all Draconis when I say they are a species to be admired.”

“Stalk. Able to see fully around them. Interesting. Good at surviving hunts. Very well adapted to environment. Makes them capable in combat.”

“The perfect soldiers to have by your side in a fight. They are highly capable in battle, and highly alert. I like that they can poison their enemies, too.”

“I tasted a few of 'em Zoles. Little on the sour side, but kinda meaty, eh? I recommend eatin' 'em raw, mind you.”

“Zoles. It could be said that they are to Borealis what Zazane are to Andromeda. We, as well as I, shall respect them with high regard as such.”

“Their 'high-and-mighty' nature is all well and good until they come into contact with a Kicath. Then it becomes a bit of an issue.”

“Wisdom and justice are the pillars upon which their empire stands, as does ours; although we come from different worlds, there are underlying similarities in our cause and creed. Shenthar'iel van'thae'nu, Dei'nar'su colthar'dhantho.”

First model of the Zoles