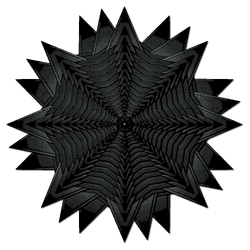 “There are universal constants in this universe, and they all bow to one force alone - ‘end’. All things die, and those that cannot die will nevertheless end. The Zhulultu...they don’t end. They cannot end. Their concept of ‘death’ predates the earliest vestiges of the universe, and is entirely alien to our laws. We think they’re gone, destroyed and never to return. No. That’s not true. They’re merely watching us, waiting, poised...we’ve already felt the scorn of one Zhulultu, and still, to think he is finally ‘dead’ is a foolish idea. The Zhulultu will never leave us, and they will remain here long after we have finally knelt to the constant of death.”

The Zhulultu are a dormant order of interdimensional Ultraterrestrials. The lords of an intergalactic expanse spanning much of the ancient First Gigaquadrant, the Zhulultu engineered entire galaxies as part of their divine tyranny. Their seat of power was shaped largely by the legacy the Zhulultu left behind, and the modern Gigaquadrant was irrevocably changed by the destructive crusades of the last known surviving Zhulultu, Zhuleshxi.

Predating the very origins of the universe, the Zhulultu resided in the transtemporal realm of Xcxalcxulom as immaterial entities beyond the tangibility of the third dimension. At some point in time, near enough the dawn of the universe, Xcxalcxulom was razed beyond repair by the Zhulultu themselves amid a divine war - Zhuleshxi, a fanatic of the Xhodocto, had caused the death of the dimension by exterminating a vast number of his own kind, however the remaining Zhulultu that bent to his will found no reason to remain in Xcxalcxulom. To survive, the Zhulultu transported themselves to this dimension before the formation of the earliest galaxies and were thought to have coalesced matter together and in the process, influencing some of the distribution of matter in the First Gigaquadrant.

The Zhulultu easily became disenchanted with the chaotic nature of the universe; whereas Xcxalcxulom was a perfect design of the Zhulultu's machinations, the universe was wild and primitive - the Zhulultu believed it necessary that the First Gigaquadrant became part of their design as well. Rapidly expanding their dominion, innumerable galaxies fell to the laws of the Zhulultu, with an equal number of ancient and advanced cultures warring against them in vain. The power of the Zhulultu provoked the Essentials to halt the progress of the Zhulultu - despite gaining a foothold in virtually every galaxy of the Gigaquadrant, a number of galaxies - including most of those that are influential in the modern day were liberated from Zhulultu control.

It is not known as to how the Zhulultu culture dissolved, though it is believed that Zhuleshxi had sent several Zhulultu - and galaxies - to death to destroy Essentials that prevented their absolute dominion. At the same time, a number of Zhulultu, including Zhuleshxi himself had disappeared and subjected themselves to hibernation and sent themselves to the far edges of the known universe, awaiting their reawakening in the ages after their culture ended. The Zhulultu that survived following the destruction of their order rapidly lost their minds as their technologies dissipated, escaping into degrading husks and other artificial bodies and continuing to manipulate order on a much smaller scale. Several of these insane Zhulultu eventually died out, whilst others remain in the Gigaquadrant as a vague semblance of their original selves. Across the Gigaquadrant, archaeological remnants of varying size remain both discovered and undiscovered, including the tombs of deceased Zhulultu that still haunt the Gigaquadrant with their ominous presence. An unknown number of megaconstructs survive intact elsewhere, some which possess destructive power to eviscerate the galaxies they reside in several times over.

Despite the Zhulultu fading into myth, the Ultraterrestrial culture never truly died out - Zhuleshxi was awakened from his billion-year slumber by a primitive ancient Earth culture. Having only an infinitesimal fragment of the technology and power that he once had, Zhuleshxi sought not to rule over the universe, but rather send it to its doom - enacting the War of Ages and destroying the Tigris Galaxy in the process and awakening the ancient and divine powers of Chaos once more.

Advanced beyond universal comprehension, the Zhulultu possess technological might that engineered vast expanses of the First Gigaquadrant with little effort on their part. Using interdimensional energies to move matter and even cause it to violate the laws of nature, Zhulultu were able to form and annihilate entire celestial bodies - planets and stars by a snap of their fingers, and possessed the necessary means to create and eviscerate galaxies. Most modern cultures, even at the height of their advancement would only be met with extreme disinterest by the Zhulultu.

Due to the alien laws of their home dimension, the Zhulultu could not exist in immaterial form without their consciences becoming rampant and prone to dissipation. The Zhulultu instead had composed their own form of matter that transcended physical laws that became part of their own being and in addition the megaconstructs and architecture. The name given to the matter is sometimes referred to as Nexidium. Some information regarding the Zhulultu describe that this same form of matter had the potential to undergo transformations that defied spacetime constants. Surviving instances of Zhulultu technology also include the so-called Schism Stars - an installation of seemingly infinite production of the interdimensional energies that plague spaces they once inhabited.

“Harbringers of shadow, doom and despair. Their legacy brought forth the forces of darkness that threaten all of existence!”

“Misguided children of the Angel Plasma. Their fate was not close to what they truly deserved.”

“Extinction. A fitting punishment for ignorance and fear of the Truth.”