Yes. Most have dragon wings

depends on clan; highest is Kian

A foot taller than the average human

Friendly, but will love to destroy a nation that it detests

"The Zerikumm are creatures that adapt to their environment. They've adapted during a famine and take on five different forms."

Zerikumm is actually the general name assumed by its five clans. These clans are Kian, Fenri, Maini, Elmb and Hykia. Although they are all related and come from one ancestor, their appearances are very different.

Long ago, all the Zerikumm looked alike. The cause of their varied appearances and abilities is that at one point in their history, there was a famine, causing the Zerikumm to split up into 5 groups and travel to new lands. Each area which each group stayed in were very different to each other.

After a thousand years, a mysterious being and 3 dragons appeared and lead the 5 clans into the area they live now. This occasion is being celebrated annually in a festival called The Reunion. 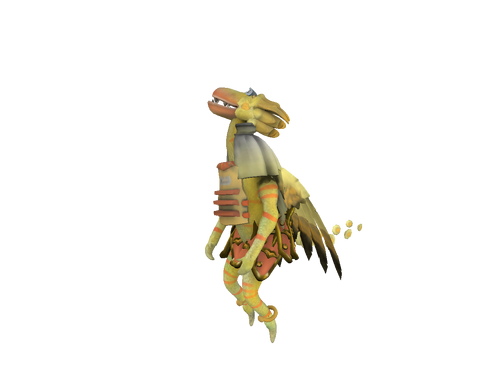 The Kian are the most intelligent clan of Zerikumm. Their bodies are quite delicate, so they either hire the Maini or any other strong creature to do laborious tasks, or they do it with magic. They are good at all kinds, but they often do light magic, for it is the easiest for them.

“Nature is the most powerful force. We will harness it.”

The Fenri's odd appearance hasn't gone unnoticed by other species during The Isolation. Because of this, most of them settled in forests, where they mostly spent time with beasts, and this is one of the reasons why Fenri are very good at flora magic. They also have the magical ability to communicate with animals. Today, the Fenri have gotten over that and are often seen trading food and medicine to other species.

“All day we will work, for it will make us stronger.”

The Maini usually spend their time working in the mines. They are often hired by Kian and nearby species to work. Their produce are usually crystals, stone for building, and gemstones. Maini often do their work by hand, but sometimes, they use earth magic.

“You do not know how to make something this simple?”

The Elmb are the architects of the many buildings in the cities that the clans settle in. The appearance of their designs is smooth, and they try avoid putting too many details in their work. They are also blacksmiths, and use fire magic the mold metals.

“The world is there to explore.”

The Hykia are usually found on the outskirts of their city. They love to explore, and they can breathe underwater, causing their interest in exploration. They wield water magic to help them in their adventures, which are often scheduled by the Kian.

The Zerikumm are polytheists, meaning they believe in many gods. These gods are Keheldron(the mysterious being) and his dragons Aengit, Hisda and Lupon, whose duty is to keep an eye on mortals. These deities are believed to wander the planet to judge the inhabitants.

"They reunite us, and they help us in agriculture, technology and the like. To assist them is a blessing."

The main deity of the Zerikumm. He is often depicted as a crested, bipedal, dragonic being with "tails that extend in all directions" and holds a large cane with his symbol on it. He is believed to have lead the Zerikumm to each other. In Zerikummic mythology, he often shows to mortals that either have been very bad to punish them , he appears to "special" mortals to do his missions.

One of the 3 dragons of Keheldron. Aengit is depicted as a winged snake that has a hard material on its head. It travels the sky searching for beings to reward for their good deeds.

One of the 3 dragons of Kehldron. Hisda is depicted as a large snake with large fins and "stones levitated by magic". It travels the seas to guard the sea creatures from harm. It can cause tsunamis large enough to completely drown a whole village.

One of the 3 dragons of Keheldron. Lupon is depicted as a large dragon with floating wings, supposedly made from volcanic rocks. In Zerikummic mythology, it was born when a volcano erupted inside a ravine filled with lava.

The Festival of Reunion is a celebration that aims to recreate the time when Keheldron and the 3 dragons led the Zerikumm clans to each other.

In this festival, 4 people will act as Keheldron and the dragons. When the sun sets on the eve of the festival, the people will retreat to their homes, and no Zerikumm from different clans can stay together. When the the sun rises on the day of the Festival of Reunion, the ones acting as the four deities will call all the Zerikumm to the center plaza, where there is music, dancing and food.

Retrieved from "https://spore.fandom.com/wiki/Creature:Zerikumm?oldid=805675"
Community content is available under CC-BY-SA unless otherwise noted.