Jatooinhomo feminicornis (Dinoman972, 2018)
The Zarbriaek are a nomadic people native to the desert world Jatooine. The Zarbriaek are humanoids with a proud history as nomads and travellers, venturing far from their own world to explore the Quadrant Galaxies.

In the past, the Zarbriaek were known to be ahostile and ruthless species, often fighting the Amiaeria colonist for a long time until they found a way to live together on the desert planet and realised that trade ensured the survival of both their species. The Zarbriaek are a proud race, great warriors and tacticians and above all things fierce in battle. Physical strong, the Zarbreaek are hard workers, enduring the heat and sun of Jatooine to survive. Their female are agile and strong as well, though have additional horns wich is genetical unexplained. Their dark skin protects them against the sun and prevents them from burning. Female Zarbriaek can be quite exotic, using their features to get what they want and like their male counter parts, are quick to anger when things do not go as they had planned.

They wear clothes made from natural products and are often self made.

The Zarbriaek are natives to the desert world Jatooine, as nomads they travelled to the planet for centuries. Knowing the lands and wildlife, the Zarbriaek eventually managed to tame both the Jatrosaurien and the Pachydos, utilizing them as caddle and mounts. The native birds known as the Archtalon are considered to be a pest.

Around 1250 BQF, Amiaeria colonists arrived at Jatooine and settled themselves near natural water springs. The sudden arrival was met with a great distrust and in the beginnings the two races were often at odds and fought each other in various campaigns and battles. Eventually both sides saw the necessity to trade with each other to ensure their own survival and the two began living in harmony and peace for decades. However deep in the desert caravans were often attacked by both parties and relations maintained uneasy.

Around 0 BQF, the Ortella inhabited the planet and lived in rather harmony with the Zarbriaek, who were considered Rambo Nation citizens after various nomad leaders signed the Treaty of Fornaeria in 2800 (02AQF). Though a member species they rarely venture off Jatooine and their species is rarely seen serving within the general navy.

The following planets are mostly inhabited by the Zarbriaek. 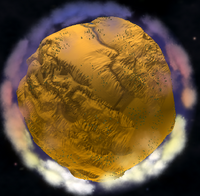 The Png files require the Dark Injection and CamBen ColorPack.