The Zanierton are an effectively extinct species of feline humanoids native of an unknown world of the old Gnaaha Galaxy. Once its rulers, they eventually met their ends at the hands of one of their top scientists, Mahedore, who destroyed the old Zanierton Empire with his Gynash Dragons. Officially deemed extinct, the Zanierton living today are clones created by Mahedore to serve as his zealots who currently answer to the Corruptus and the Dominion of the Xhodocto.

Due to the destruction of the Gnaaha Galaxy during the Annihilation, all traces of the Zanierton's legacy have been lost. Even those cloned by Mahedore are widely assumed to have been engineered to fit his needs, meaning they are not legitimate copies of the originals.

The Zanierton's history has been lost following their destruction and later the annihilation of the Gnaaha Galaxy. The only records of their race is that they were a cold species of scientists with little sympathy for aliens, believing themselves to be better than others in all ways. They reigned over the core of the Gnaaha Galaxy for at least 500,000 years before Mahedore created the Gynash Dragons, which led to their extinction after all of their worlds were swarmed with the beasts. With the destruction of the galaxy, their legacy was lost, as they are not known to have colonized any other galaxy in the First Gigaquadrant despite having observed the Kraw Galaxy at many occasions.

The Zanierton are a species of human-sized, humanoid mammals with a physiology which vaguely resembles felines, most predominantly their heads and faces. They possess a bright yellow fur over their bodies, which shifts to blue on their limbs and the tips of their large neck frills. Their heads are adorned in bony horns, large pointed ears and whiskers similar to those of cats. Zaniertons are also known for their rather unnaturally long arms, which end in sharpened fingers. Females can be told from males by possessing 'softer' appearances as well as a thicker layer of fur on their chests.

The old Zanierton race was told to be cold and apathetic toward those not part of their species, implying their culture was built around speciesism. They were said to be arrogant and believed themselves to be the greatest beings of their galaxy thanks to their superior firepower and technology. The Zanierton clones currently living under Mahedore's control treat him like a god to be constantly pleased through manual labour and offerings, a considerable contrast to the original race who was said to be vehemently antitheistic.

The Zanierton are rather frail creatures, possessing roughly only half of the strength of a human. Their only biological advantages are their sharpened fingers, which they can use to slash potential enemies with. Their elongated arms also give them superior reach, though they are still considered unfit for hand-to-hand combat. Despite possessing horns on their heads, they are used solely for display, for attempting to fight with them can lead to the Zanierton breaking them or to fracturing their own skulls. 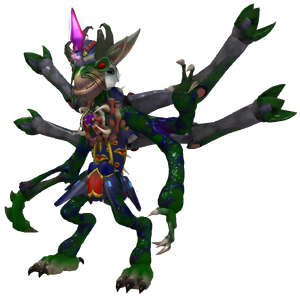 “For the master, I live again, I experiment again!”

Mahedore Zozhro, most known as the All-Mind of Gnaaha is an incredibly ancient Zanierton scientist who serves as one of the Eight Vanguards of Shu'wokerama. Known for being the original creator of the Gynash Dragons and a disturbed mind who trapped himself in his spaceship's machinery to obtain immortality, he was eventually absorbed into the ranks of the Corruptus and now his great amount of resources are used to boost the armies of the Devourer of Dreams. 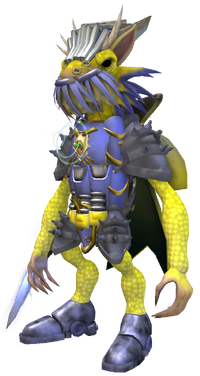 “I am the greatest servant of the All-Mind.”

Ishkhaelro is a direct clone of Mahedore created for the purpose of leading his zealots. Considered to be the most powerful of the clones, he serves as the military leader of the Zanierton and as a commander for his master's Gynash Dragons. A cold and calculating being, Ishkhaelro will stop at nothing to please not only his masters, but also his own masters. 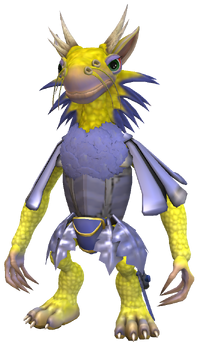 Ztarashrema Solunro is a notable Zanierton clone who serves as Mahedore's assassin and lover. Described by the other acolytes as "exactly like the master, if he were born a female", she dedicates the entirely of her life to fulfill Mahedore's carnal desires, something she seems more than eager to do at nearly all times. When needed, she also serves as his top assassin, sometimes accompanying Ishkhaelro in his assignments.