The Yodian are an ancient and mysterious race within the Cyrandia Cluster. 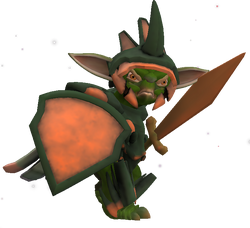 Yodians as a species are rather small compared to other races within the Cyrandia Cluster. Most known Yodian standing below 70 centimeters, but have extremely long lifespans lasting many hundreds of years. Yodian have sharp, elfin ears, ridges on their foreheads and tridactyl hands. Their leathery skin and blood were both light green. Their sharp teeth pointed to a carnivorous diet. Most of them, though not all, spoke an idiosyncratic dialect of Galactic Basic Standard, utilizing non-standard grammar and formalized sentence construction. Most Yodian posses strong magical abilities and connections as well, indicating they were probably blessed by either the Atlantica or the Oikoumene. Yodians by nature are wise and curious beings, wishing to explore and learn new things led them to search for new life among the stars.

Though friendly and honest by nature, the Yodian created their own enforcers, known as the Yodian Knights. Clad in green/orange armor these knights are the bravest, most noble and fierce Yodians. Serving onboard their ships and serving the law, the knights are considered the peace keepers of the Yodian territories and protectrates.

Not much is known of the history of the Yodian species. Their homeworld, Yodian has once been a bastion and promising planet of their space faring empire within the Unclaimed Territories of the Quadrant Galaxies. Records indicate the Yodian reached space around 14.000 BQF and are one of the first space faring civilizations after dissapearance of the Aininyë. The Yodian took upon their new roles as explorers and shepards of still developing lifes. Their exploration led them southwards where they eventually came across the Wormhole Plateau, witnissing many wormholes leading to various locations the Yodians were hesistant to use them, not knowing if their were others who were friendly beyond them. As such the Yodians launched their Destiny-class, a 752 meter long range exploration ship. Sending through each wormhole the Destiny-classes began their exploration missions, with few ever returning. When the Quadrantia Grox arrived within the Quadrants in 3530 BQF, the Yodian species were deemed unworthy of assimilation and their civilization was destroyed by the fearsome Grox. Scattering across the Cyrandia Cluster the Yodians dwindled in numbers, and their species faces a certain extinction.

One such individual, known as Kjac lives on a remote planet, with a small humanoid colony where he can study the nature and behavior of the mystical Scions in peace. 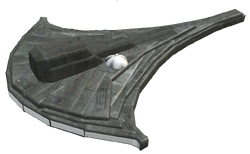 The Destiny-class long range exploration cruisers were once the pride of the Yodian civilization. These 752 meter long vessels served as the main ship for exploration, equipped with shields and weapons for defense, the ship was equipped with additional features as well. Many laboratoriums, a state of the art medical center and various accomodations like a cinema, walkway with stores and a swimmingpool were all installed at the ship, providing the Yodian with their needs for relaxation and free time.

The homeworld of the Yodian species, Yodian has long since abandoned and it's location remains unknown, even to their own after the terrible destruction waged upon them by the Quadrantia Grox. Rumors have it, the ruins of the cities and villages can still be found at the planet. Stories indicate Yodian lies somewhere within the Unclaimed Territories of Quadrant 82.

“Ancient and wise, shouldn't they have perished by now?”

“Aren't they, like, these guys whose language shows a noticeable predilection towards the object–subject–verb word order?”