The Vogrik (also less known as Acaphreans) are a race of sentient Dexterudae originating from the swamp world of Acaphre. They are the primary, almost ubiquitous, race of the nation that carries their namesake, the Vogrik Directorate. Originally unknown to the Gigaquadrant, the Vogrik have recently revealed their existence to the Gigaquadrant. The Vogrik are notable for their behavior, born with an innate desire to learn more about the universe they live in - which led to the creation of the Directorate.

The Vogrik are creatures originating from the water covered swamp world of Acaphre. Originally evolving from large vertebrates living beneath the water, the Vogrik slowly began to evolve intelligence, and as they did so, they began to evolve the trait of being amphibious - evolving a form of lungs that would work in tandem with their gills. The Vogrik became the apex species on their planet upon evolving intelligence, due to being capable of solving problems and their reproductive systems, where a single female could lay 10 eggs. Ultimately, as Vogrik society advanced, they began to be able to master their environment - with some Vogrik communities becoming capable of taming even the worst horrors of the deep that Acaphre held.

Ultimately, once the first Multus Esse ruins fell upon their world, the start to space travel had begun.

The current Vogrik subspecies, Maritaeus vogrik has some rather unique traits that define them easily. Their skin, which is rather rubber-like to the touch, is black in color. When the sun shines on their skin, it gleams blue. When a Vogrik gets wet, their skin naturally secretes a highly toxic mucus across the wet spots, aiding in swimming and deterring parasites from attaching and predators from trying to eat the Vogrik. This toxin is produced by glands within their subcutaneous layer in their skin, of which is created using proteins digested by the Vogrik, which were acquired by eating plant life. On a human, a 500 mg dose of Vogrik toxin can kill an average adult. The symptoms generally involve extreme nausea, vomiting, and diarrhea. A dose of 500mg and above causes death through the toxin attacking the liver.

Vogrik all have 6 limbs. On land, one pair of these limbs serve as legs, and the other two pairs serve as arms. When underwater, each pair is used for swimming and steering. Vogrik are naturally extremely strong in their limbs and tails, and as such are capable of swimming at great speeds when they need to. The hands and feet of the Vogrik are all webbed, and when on land, they quickly start to dry out and shorten for easier use of the hands. Vogrik also have a 1.5 meter long tail tipped with a sail and what could be considered a caudal fin. This allows for better swimming capabilities, and on land, helps the Vogrik keep stable and walk. A Vogrik stands about 1.8 to 2.5 meters tall, and weigh approximately 90 to 150 pounds. Relative to their bodies, Vogrik possess a larger brain cavity than humans do, and their brains weigh 5 pounds heavier than the average human - allowing for a greater average intelligence overall.

Vogrik have 4 eyes, with black sclera and bright, almost glowing, white pupils - providing an eerie look to them. Their eyesight is extremely good, having adapted to spotting underwater prey and predators from extreme distances. They do not see the same spectrum of colors that a human does, but are very close to being capable of seeing every color that humans do. Their faces are slightly pointed, and while their mouths have 4 different parts to them. Their teeth are shark-like, but blunter, and regrow. Their mouth can separate into four different parts, as mentioned, to devour and chew bigger prey, as well as keeping prey from escaping their mouths. - these parts resembling short and thick octopi tentacles, and are incredibly strong. A Vogrik's nose is extremely flat, and is essentially just slits that open and close above their mouths. Vogrik are capable of smelling, but their noses are not nearly as sensitive as a humans, so they are not very great at detecting scents.

Vogriks are omnivorous, and typically feed on plants. Historically, their main prey were decapods - grabbing them from the ocean and smashing their shells on rocks before feeding on the meat underneath. As Vogriks became more intelligent, their prey began to include the harder to catch fish and squid in the ocean, and as they went to land, reptiles and other amphibians became part of their diet as well. In terms of movement, Vogrik were capable of bipedal movement on land by walking and running, and in the water were excellent swimmer. They were capable of catching prey on both land and water - on land their gills would slam extremely tightly shut, and their respiratory system would quickly switch to the use of their lungs when in the absence of water. Upon entering the water, their gills would open and the passageways to their lungs were slammed shut to prevent water from getting in and causing pneumonia.

Reproductively, Vogrik do not form couples. Males and females only mate once in their lifetimes, of which generally consists of a male covering a female’s eggs in sperm to allow growth of young. Females lay eggs in batches of 4 to 10, and will watch over their young until the end of their adolescence, where she will then abandon the clutch and go her own way - or to her own clutch. Meanwhile, upon reaching adolescence each one of the siblings begins to form a strong bond with their eldest brother and each other, making the sibling the “leader” and father figure of the clutch. The clutch treats each other as being complete family, and remains with each other until every individual in the clutch passes away. Many clutches can, and usually do, band together to form a community out of an innate desire to meet others of their kind and work together to survive.

Vogrik are also exhibit permanent sexual dimophism and dichromism. Males of the species are larger and have the aforementioned black skin. Males typically have denser muscles and longer tails. Females, however, are a much lighter blue. Females also secretes a far deadlier toxin for 8 Earth months after laying her eggs, which is fatal at a 50mg dose than the usual 500mg dose. Adolescence is reached after 9 years after hatching, and adulthood begins upon reaching 16 years old. In prehistoric times, the life expectancy for a Vogrik was 30 years, although nowadays, the life expectancy of a Vogrik can exceed well over 100 years. Individuals over 150 years old are considered to be old, with individuals over 200 considered extremely old.

The ocean is, naturally, an extremely diverse and very demanding environment. With one as large and as deep as Acaphre, it is only natural that the dominant species on the planet are diverse and changing to fit their environmental needs. 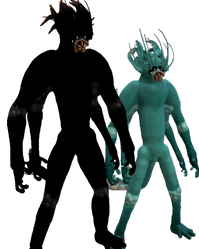 Northwestern (Maritaeus vogrik westar): The most common Vogrik species, the Northwestern hail from the north-northwest areas of Acaphre. The scales of the males are black and the females are blue. Their rather high population is due to their historical significance and their age - not only were they the first to appear, they were also perpetrators of multiple genocides against other subspecies. Southeastern (Maritaeus vogrik blancus): The Southeastern are the second most common Vogrik subspecies, originating towards the equator of Acaphre. The Southeastern's characteristic light grey color stems from evolving to reflect the suns rays and not absorb them - a contrast to the Northwestern, who needed to absorb the heat in their northern environment. Males are typically light grey in appearance, and females are a pitch white. 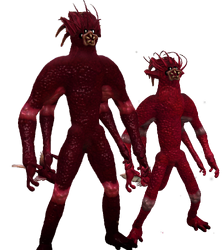 Deepwater (Maritaeus vogrik aequor): The Deepwater are one of the least common Vogrik subspecies. They originate from deeper in the oceans of Acaphre, and their skin has a deep red appearance to help them hide and camouflage in the dark ocean. They can naturally live at extreme depths - however they do require speciallized suits or augmentations to survive outside of the oceans of Acaphre, as the pressure difference can injure or kill them. Naturally, they are rare outside of Acaphre - but very common in the deep oceans of their homeworld. 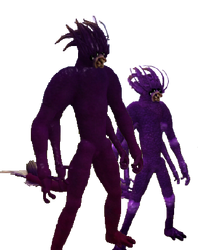 Spaceborn (Maritaeus vogrik stella): The more rare of the subspecies, Spaceborn are those mutated by living in outerspace and have a purple hue. While their mutations are widespread and varied, Spaceborn are almost always uniformly purple. In keeping with the sexual dimorphism, males are dark purple and females are light purple.
Add a photo to this gallery

Retrieved from "https://spore.fandom.com/wiki/Creature:Vogrik?oldid=803809"
Community content is available under CC-BY-SA unless otherwise noted.