Pirate and criminal bands
Empire of the Murgur

“Never has a race so vile and atrophied of moral guidance arisen to such a prosperous and thriving existence in the history of our galaxy; not conquerors, not slavers, but little more than murderers and destroyers. And never has a race been so deserving of the condemnation of extinction. ... Little more than barbarous, uncultured savages.”

The Varkorus are a species of incredibly savage and bloodthirsty creatures native of an unknown planet at the Borealis Galaxy's Demolidus Sector. Widely famed for their extremely aggressive behaviour, these creatures are seen as galactic vermin, infesting the criminal underground of entire worlds and forcing their way into civilized society through the use of violence. During most of their history, they served as slaves of the Wranploer Legion and its successors, and today, they are scattered across the whole galaxy, from the worst poverty to the Polar Crystal Alliance under the rule of the Empire of the Murgur.

Considered a permanent plague in galactic civilization, most nations do their best to either correct the Varkorus and turn them into functional members of society or attempt to exterminate them outright, with both never succeeding in the end. These ferocious, violent creatures have made their mark in the galaxy as a reason to always watch one's back in the Eastern Arm, for Varkorus are well known for never needing reasons to end lives. They end lives because they enjoy it.

The origins of the Varkorus race have been lost thousands of years in the past. What is known about them is that their homeworld at the Eastern Arm was conquered and enslaved by the Wranploer, who decided to use the Varkorus as slaves due to their robust and strong bodies. Being bred and distributed across Wranploer space, their large numbers and power caused their Wranploer masters to have difficulty controlling them, and soon enough, the Varkorus race began infesting whole worlds like vermin. Many Varkorus ended up in Murgur territory, where they were absorbed into many Murgur Warbands over the years, and they have also seen often working alongside the Levarcor due to their similarly brutish cultures. The Varkorus are considered by the Polar Crystal Alliance as a plague which needs to be contained, but considering their sheer numbers and how widespread they have become, the Alliance will not succeed on this task anytime soon.

Varkorus are tall, monstrous creatures who are three and a half meters tall by average, though the largest Varkorus recorded reached almost four meters. They possess a thick, blue hide and exoskeletons around their arms and legs. On their heads, they possess two pairs of large horns and white eyes, and they have many rows of huge, fanged teeth. Varkorus also have long tails and what look like wings on their backs, though those are actually frills used as cooling mechanisms. While the Varkorus have genders, males and females are virtually identical in appearance.

The Varkorus are well known for their bloodthirsty behaviour. Being almost as violent as races such as the Zí-Jittorám or Cold Loron, the Varkorus as a species have an instinctive desire to kill every living thing not identified as useful on their proximity. They need little reason to kill, and simply do it because they enjoy the thrill of ending the lives of others, be them aliens or other Varkorus. All members of the race are known for groaning and retching before speaking, this being a cultural habit created by them because they downright dislike speaking, and would rather kill the person they are speaking to.

Varkorus are very strong creatures physically, with an average member of the race being capable of killing a Zoles with their bare claws. They have a distinct immunity to diseases, including alien ones, and only get sick to the worst and most potent biological weapons. When in combat, Varkorus will often attempt to leap and pummel their enemies into the ground before ripping them to shreds with their claws and fangs. Additionally, they have impressive regenerative powers which allow them to heal deep wounds in a matter of hours and regrow lost limbs in a matter of weeks, as long as they are not exposed to combat stress. 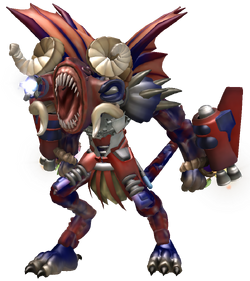 “Grrrh! The galaxy will become ashes! That is my dream!”

Kravh Helljaw was a psychotic Varkorus who served as one of the lieutenants of Dark Grip, Torrent's special agents. Unlike the rest of Dark Grip, Kravh was never officially a soldier and was instead a serial killer well known for causing chaos and arsoning on his path. He was eventually contacted by Torrent, who convinced him to join his cause in exchange of freedom to burn and destroy everything he wanted. Through a series of cybernetic implants and mechanisms, Kravh could launch explosive fireballs as well as set himself completely on fire. Like the rest of Dark Grip, he also had a lesser variant of Torrent's nanomachines. He fully experienced the pain of being burned, but did nothing about it, for it was a pain he loved. 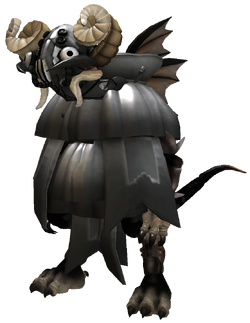 Trehikh Loneclaw is a Varkorus child who displays elemental powers and serves under Aentaeus's vessel. Essence-attuned Varkorus are exceptionally rare and are shunned by the others due to their ignorance over what their powers are, which led Trehikh to become subject of great interest to the Polar Crystal Alliance once his existence was confirmed by Ioketa sages. Aentaeus and his crew ventured to Hyposirius's Dead End and cut their way through hordes of Varkorus in order to rescue Trehikh - leading them to be dreaded across the space station once they returned with their lives. Trehikh is a highly eccentric individual who needs to wear a special mask in order to contain his psychic powers, and he displays a number of abilities such as levitation, mind reading and telekinesis. Ultimately, Trehikh would be indoctrinated by one of Regnatus' backups alongside Aentaeus and lose his life during the War of the Ancient Three.

“Perhaps one of my ancestors' greatest achievements and greatest mistakes, all at the same time. The perfect cannon fodder, but also eternally rabid animals who will kill you if you give them an opening. They have their uses indeed.”

“Horrid creatures. I avoid them whenever I can.”

“Ever heard of toothpaste? Because damn, you need some.”

“i rememba dis one time one of dese sods bit me in da hed. we had ta use a wrench ta get it off. IT HURT A LOT MAN”

“I would opt to destroy them in their entirety; no good has come from an encounter with their kind and they have betrayed the ways of society and culture time and time again. ... An utterly horrid and irredeemable people, as unfortunate as it is for me to say.”

“What an excellent species! Immune to disease so it doesn't require annoyingly expensive medical treatments, but lifespan short enough to sod off after their use expires and stop overpopulation! I love it.”

“I hope the Alliance can find a true home for these species. To be condemned either to a 'fix' or death is not a bright future.”

First model of the Varkorus

Retrieved from "https://spore.fandom.com/wiki/Creature:Varkorus?oldid=755735"
Community content is available under CC-BY-SA unless otherwise noted.