“Ah yes, the neurotic state of the Tyrenne people is widely known. It was the result of biological experiments made on their people. You can only wonder who would be heartless enough to do such things to such pacific creatures. While the process is reversible, curing every single one of them is no easy task due to their large population and the fact many of them still live at the Kraw Galaxy. Nothing less than a shame if I must say. We have done our part.”

The Tyrenne, known in their own tongue by names such as Tyrentek, Vhagap and Tiren are a species of aquatic creatures closely resembling sharks natives of Planet Vhaga, located at the Groxic Arm of the Kraw Galaxy. Their history is marked with them being slaves serving under a now extinct race called the Xhrassh, who bioengineered the formerly friendly and young Tyrenne people into neurotic creatures prone to violent mood swings, and they only obtained their freedom after they successfully deposed the Xhrassh with the aid of the Kraw people at the Earth year 2707.

Mentally broken, unstable and with great difficulty in developing relationships between each other as well as aliens, the race attempted to create their own space-faring republic which ultimately became defunct due to the race having become too damaged to be left on their own devices. The Tyrenne are currently spread across the worlds of the Kraw Federation, who has accepted them and given them the chance to remain in their home galaxy while another large portion of the race migrated to the Milky Way Galaxy and was absorbed into the Indoctrinate Collective, who used their own mastery of bioengineering to cure their Tyrenne of their afflictions.

During pre-spacefaring times, the Tyrenne were a hostile and aggressive race with a deep religion which followed a deity they referred to as the Absolute Tyrenne, whose teachings involved sacrifices in order to appease it. This culture lasted until civilized times when their homeworld of Vhaga was invaded by the Xhrassh and their species was enslaved, being turned into sub-citizens and cannon fodder for the aliens' enemies. The Xhrassh used the Tyrenne as test subjects for experimental technologies they did not want to use on themselves, and from what can only be assumed to be sadism of their part, they altered the Tyrenne to a genetic level to remove their aggression and replace it with fear and shyness.

The Tyrenne would serve as lackeys of the Xhrassh until the interference of the Kraw at 2707 when they waged war on the Xhrassh for the purpose of liberating the Tyrenne race. The slaves themselves would revolt at the time as an effort to hasten the process, and the Tyrenne eventually achieved their freedom once the Xhrassh's empire was destroyed by the Kraw a few months following the beginning of the war. Given the chance of creating their own spacefaring nation from the foundations of the Xhraash, the Tyrenne would create their own faction known as the Tyrenne Republic, though it would go defunct roughly eighty years later due to the race becoming so damaged by the experiments they went through, they were no longer fit to live by themselves.

The Tyrenne pledged themselves to the Kraw Federation and now live at their worlds, while another portion of the race left the Kraw Galaxy to move to the Milky Way, where they encountered the Indoctrinate Collective. The Dracogonarious, feeling empathy for the creatures, allowed them in their empire and eventually cured them of their afflictions through the use of their own technologies, and now the Tyrenne are official citizens of the Collective with equal importance to all other member races.

The Tyrenne are tall, humanoid creatures comparable to Earth sharks, possessing a cartilaginous skeleton which sustains their bodies. As fishes, they require water to survive and most Tyrenne colonies are located in coasts or underwater, while land-living members of the race wear cybernetic enhancements which allow them to breath air. Their scales are a distinct shade of blue which tends to become darker as the Tyrenne gets older, and their heads are decorated with two pairs of sturdy, bony horns. Tyrenne are hermaphrodites, having no distinction between males and females.

The most notable trait of the Tyrenne race is their permanent state of neurosis, left on them by the vile experiments conducted by the Xhrassh. Tyrenne individuals are prone to violent mood swings and depressive tendencies, ranging from gleefully cheerful to maddening suicidal in a flick of a finger. Their native medicine has only enabled them to either stay neurotic or suppress it so much they become completely emotionless, neither being healthy for their psyches in the long run. The Tyrenne who have successfully received treatment for their neurosis tend to be stable, welcoming and friendly creatures who prefer to solve problems through diplomacy rather than conflict. As their society was crumbled by them being turned into slaves, the Tyrenne abhor the idea of slavery and show extreme distaste for all nations who practice it.

The physical prowess of a Tyrenne is inferior to a human adult's when the two races are compared, though the Tyrenne, being fishes, are able to breath underwater and are, by nature, very adept swimmers. The exceptions to this rule are the jaws and tail, who are both able of very strong displays of power. A Tyrenne's bite is strong enough to break a human to the bone, while their tails are incredibly muscular and powerful enough to severely stun similarly sized creatures with a slam. However, as they are not fighters, the Tyrenne rarely if ever make use of these after they have left their tribal days. 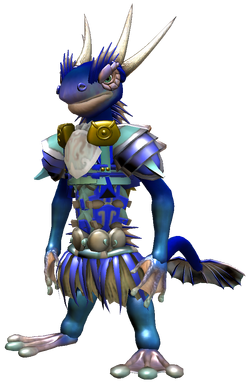 Rylioh Paristhe is the first and current Supreme Advisor of the Tyrenne in the Indoctrinate Collective. He was the chosen individual of the race to serve as their delegate in the great empire's government, and has since become a solid member of the Advisor board. It was under Rylioh that the efforts to cure the Collective's Tyrenne were conducted, making him responsible for the species now living in peace at Borealis.

“The Tyrenne have shown to be productive for the goals of the Collective. After their incessant neurosis is dealt with, that is.”

“Cowardly rats. These beings are literally too scared of life for their own good. I would be more than glad to put them all out of their misery.”

- Fre'kloar before being slapped quiet

“I guess this goes to show that even after the day has been saved and everyone lives, we cannot simply forget the struggles these people go through. They're not slaves to anyone anymore but the feelings of trauma instilled into them. ... I hope they get better one day.”