The Tra'ssahk are a bloodthirsty reptilian race native to the Mid Rim planet of Ssahk. Their great strength and fondness for the hunt of sentient species has gained them notoriety across Cyrannus. While these practices were outlawed by the United Republic of Cyrannus, their warlike and predatory nature has made them quite infamous as bounty hunters, something the Empire is taking a keen interest in.

Native to the hot, swampy planet of Ssahk, the Tra’ssahk share the same system as the feline Soúroupa and over time, a strong rivalry developed between the two physically and mentally strong races. Both species had been known to the galactic community of Cyrannus for millennia, but the first recorded meeting occurred during the Nagith War, when the evil Nagith conquerors landed on Ssahk and attempted to enslave both the Tra’ssahk and the Soúroupa. However, the two races put aside their differences and repelled the invaders.

However, this truce didn’t last long and the two races went back to a state of aggression, with constant Tra’ssahk expeditions to the Soúroupa’s homeworld of Consinople in order to collect prey for the Tra’ssahk’s urge to hunt sentient species. With the galaxies lack of a major galactic government until the arrival of the United Republic of Cyrannus, these practices unfortunately went unnoticed and unpunished.

In the years before the Intergalactic War, Republic fleets brought the Ssahk-Consinople System under the protection of the Cyrannian Senate. While the Soúroupa were hopeful that this new alliance would end the Tra’ssahk’s reigns of terror, their reptilian foes spread across the galaxy allying themselves with various criminal organization, with vast numbers becoming bounty hunters.

During the galaxy-spanning Great Cyrannus War, many Tra’ssahk groups became aligned with the Confederacy of Allied Systems, in contrast to the Soúoupa’s loyality to the ideals of the Republic. The loyality these Tra’ssahk showed for the Confederacy was generally weak, though they eventually opened the gateway to an invasion of Consinople, which was eventually halted by the Republic.

When the Imperial Era dawned on the galaxy, the Tra’ssahk sought to do business with the growing Imperial movement upon learning of their desire for cheap labour at the expense of the Soúrourpa. How these dark tidings will play out remains to be seen. Meanwhile, on the Basileus Throne World, the vicious bounty hunter Garnossk was approached by a Cogsangui client, who gave him what would become his most notable bounty yet, the murder of the leader of the Cognatus Remnant, Voro Acetenus. Now, the vile hunter makes ready for his hunt.

The Tra’ssahk people are generally a race of subverted morals, believing that to succeed in life they must destroy those deemed to be weak. Because of this, many Tra’ssahk engage in unsavoury occupations such as bounty hunters and slavers. However, the race also has some redeeming qualities, foremost among them a sense of relative honour, despite the fact this is mostly reserved for fellow bounty hunters or Tra’ssahk.

They also have a degree of pride in their heritage, seeing an insult against their history or culture as a crime punishable by a swift death. One of the decidedly less civilised aspects of the Tras'ssahk's culture is their tendency to devour their prey. This often extends to cannibalism, its not unusual for newly hatched Tras'sahk to eat their siblings, something encouraged by the parents in order to cull off weak hatchlings.

The Tra'ssahk are a bipedal reptilian race with a short snout and long forelimbs. However, while these details are relatively consistent, there is a great deal of variation in their species, with many males sporting colourful feathered crests adorning their heads. Unlike many Cyrannian reptilian species, the Tra'ssahk lack a tail and are overall more humanoid in appearance while still retaining a general saurian look. One interesting feature common in Tra'ssahk is their ability to regenerate lost limbs, a useful thing to possess for a species so keen on bloodshed.

The newly promoted Imperial mandator of the Ssahk-Consinople Sector, Zas'sak is a corrupt and power hungry man who shows care only for his own race, showing a blind eye toward slaver operations against the Sourorpa and illegal hunting within the Sector. From the moment of his hatching, the young Zas'sak was deemed the strongest of his egg brothers and sisters, a fact he proved by devouring his siblings a day after his hatching.

As he grew older, his ruthless sadism grew ever larger cutting down potential threats to his ambition which edged ever closer to political. As per Tra'ssahk tradition, he challenged the former ruler of the planet to personal combat, eventually defeating and devouring him. However, as he grew older, he became corpulent and as such bowed to the new Empire's wishes, becoming mandator. 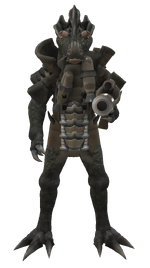 Garnossk is perhaps the most deadly Tra'ssahk in existence and indeed, one of the most infamous bounty hunters ever to grace the Cyrannus Galaxy underworld. Garnossk was born on the Tra'ssahk homeworld of Ssahk in the year 34 BNE, making him relatively young. Like many Tra'ssahk, Garnossk proved his strength minutes after birth by killing and consuming his siblings, indeed, he became famous in his life as a bounty hunter for occasionally eating his bounty, either with or without his contact's wishing.

During the first year of the Dark Times, Garnossk was approached by a Cognatus hieroarch on the Basileus Throne World and was given a bounty, the killing of Voro Acetenus, leader of the Cognatus Remnant. Though Garnossk succeeded in killing what he thought was his target, it later turned out that Voro Acetenus had used a decoy, and later found himself in the Republic Remnant. Nevertheless, Garnossk received his payment, and awaited his next job.

“A vicious and uncivilized species. Still, their ideas about making use of their mammalian neighbours are quite interesting.”

“Barbarians, fool stinking lizards with a lust for power and the art of hunting. Perfect candidates to serve on the front lines!”

“Hmmm, they seem familiar to me.”

Retrieved from "https://spore.fandom.com/wiki/Creature:Tra%27ssahk?oldid=810794"
Community content is available under CC-BY-SA unless otherwise noted.