bidpedal, walk on two legs
Crawling on all fours

The Topsabuto are a xenophobic race of amphibian skeleton creatures who inhabit asteroids and rocks near and within the Ghost Nebula. These silent hunters prey onboard their U-Class corvettes, silent and deadly to those unaware they hide within the Nebula.

The Topsabuto bodies resemble a living skeleton, they have a half-moon, disk shaped head with two small, forwards facing eyes. Its body has a white chest plate with a brown shell resembling a visible backbone and ribs and a tail. It has small three fingered hands, though rumors are they can change this into two large claws.

The Topsabuto can tuck in its shell to help it swim very fast in oceans, where it can catch prey. When in space, they use their U-classes to hunt down prey. Topsabuto prefer to live in seclusion with small numbers of their own species and are known to become very hostile and deadly when provoked, often blinded by an uncontrollable rage.

They are known to cannibalize their preys and have a strong resislliance against extreme colds, as such they can operate in space while boarding other vessels while holding their breath for a maximum of 4 hours.

It is unknown when the species reached space or when they developed though they did evolve on a lush and oceanic planet, where they hunted their prey under water as chronicled by ancient tablets they brought into space. Their home world was either abandoned or destroyed, something the Topsabuto refer to as lost.

First Topsabuto sightings in space occurred in 85 BQF when a lone U-class was spotted by a Amber-vessel. The Topsabuto are hunted by their arc enemies, the Tajakeon and fear them greatly, as such they do not dare to venture beyond the asteroid belt. 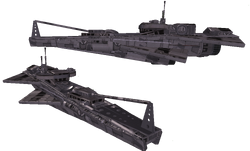 The Topsabuto deploy the 85 meter long U-class stealth corvette. A rather slow moving but highly powerful vessel (in)famous for its stealth mode and near undetectable silent running mode.

Crafted from abandoned ships within the Ghost Nebula the ship looks fragile and old but is a deadly adversary one only underestimates once. There is no second change when taken by surprise by these submarine based vessels.

The ship can both operate in space as well as underwater.

The Png files require the Dark Injection and CamBen ColorPack.