“You don't know fear until you see an army of them coming at you. Bloodthirsty, malign, wrathful, sadistic... that's just a few words you can use to describe the Tiranozark. They only respect those who can stand up to them, and let me tell you: there aren't a lot of people who can do that.”

The Tiranozark is a dreaded race of sapient dragons native of the mysterious Mortiol Starcluster in the outer reaches of the Cyrannus Galaxy. Originated from the mountainous planet known as Tyranikus, the Tiranozark have made themselves known across the galaxy for their aggression, their superiority complexes and for the great destruction they have caused to many alien civilizations through the centuries, leading to either the enslavement or extinction of many cultures. With links to other powerful forces such as the Mortalitas and a deep distaste for the Capricyránae races, the Tiranozark are among the most dangerous inhabitants of the Unknown Regions.

The Tiranozark's history before they joined the galactic community is subject of debate, but it is known they first colonized space about 7,000 years before the formation of the Galactic Empire of Cyrannus, at a slow pace compared to current days. The original empire of the Tiranozark had little interest in interacting with aliens and was far more preoccupied with expanding its sphere of influence. This lasted for several hundred years until the Tiranozark's empire had achieved a large size for the time being, and only then would they begin contact with aliens for the purpose of research and possible allies or trade routes. Among the first alien civilizations to find the Tiranozark were the Mortalitas, who were close neighbours of their empire, and a mutual respect developed through the years which would become a close alliance between the two warrior races.

The following thousands of years of the Tiranozark's history are summed in constant battles against alien civilizations for the purpose of expansion as well as in-fighting due to the people being displeased with the government of the time. There have been a total of four great civil wars in the Tiranozark's history, with their empire shifting from a monarchy to a tyrannical dictatorship, then to a republic and finally to a stratocracy which persists to this day. The one responsible for the current government is the Tiranozark popularly known as Tyrant, who would become the most known member of the race in galactic affairs as time passed.

Thanks to the influence of the Mortalitas, the Tiranozark would come to join the Confederacy of Allied Systems, the Galactic Empire of Cyrannus and later the Cyrannian Imperial State until its dissolution. The race has taken a distaste for the Capricyránae races due to how abundant and influential they are, and while they have pledged allegiance to such factions through the ages, they have never bowed to any of them and still retain their independence.

The Tiranozark are a race who believes itself to be greater than most others, only coming to respect races of equal power but never admitting the existence of more powerful species, believing such a mindset to be a weakness. They are a species who centers its culture around warfare, naturally enjoying dominance over others and taking great pleasure in either destroying those deemed "weak" by them or turning them into slaves. This gives them a stereotype of being mindless, bone-headed brutes, and while this might be the case for a number of individuals, the Tiranozark are far from stupid and possess great intellect and technology which rivals that of the galaxy's most influential races.

The Tiranozark are a species of huge dragons with blue and white scales which cover their entire bodies. They can reach heights of 3,8 meters in average, with the tallest members of the race reaching over 4 meters. Both their arms and legs are covered in thick, bony material which acts as natural armor, and their shoulders in specific possess large bony plates which act like natural shoulderpads. Tiranozark possess large, webbed ears, a long tail which often possesses four or more spikes at its end, and a pair of vestigial wings on their backs. Due to their massive size, the Tiranozark are too heavy to fly with them.

Tiranozark possess two large horns upon their heads, one smaller and one larger which curves to the right on males and to the left on females, which is thought to have been used by their ancestors to attract mates instead of fighting. Tiranozark skulls are rather fragile, especially the area around the horns, and they may be easily fractured in combat unless the area is protected. A Tiranozark's claws are sharp and designed to tear the opponent's flesh, being equivalent to an Earth bear's claws in function and power. 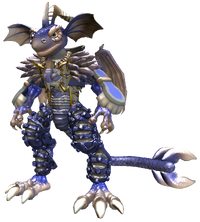 Villios Mervandis, most known by the moniker "Tyrant" given to him by the various alien civilizations he antagonized, is the former leader of the Tiranozark who currently serves under Zillum. A figure known for his immense power despite not possessing any supernatural enhancements who leads the Tiranozark's stratocracy with an iron fist, Tyrant has made himself notable across the Cyrannus Galaxy for the great destruction he has caused to many factions through history and for his distaste toward the Capricyránae races, believing them to be obstacles in his people's way. Tyrant shows no regard for the weak, and is more than eager to cull them out of his way rather than give them any chance of survival.

“A powerful and noble race. I can easily work with their kind.”

“The Tiranozark inspire fear in the hearts of even the bravest citizens in Cyrannus.” 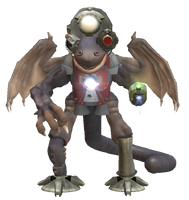 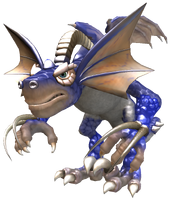 First model of the Tiranozark

Retrieved from "https://spore.fandom.com/wiki/Creature:Tiranozark?oldid=804411"
Community content is available under CC-BY-SA unless otherwise noted.