“Above the clouds, the dream folk look upon us, protecting us from the spawns of nightmare and cruelty. Their intentions are genuine and with no ulterior motive, for it is their very nature to serve us normal men and women. We do not serve them, rather they serve us.”

The Alavahraa, most known as Thoi'olerthae, Dream Folk or Dream Wisps are a species of Essentials native of the alternate plane known as the Realm of Dreams. The archetype race of the Essence known as Dream Energy, the Thoi'olerthae are dedicated to an eternal role of pleasuring mortalkind through pleasant dreams and sometimes physical contact, given to them by their creator deity Sonhadromerith.

The Thoi'olerthae are a benevolent race of Essence beings who are eager to aid mortals in their conflicts, especially when they involve combating other dark Essentials who may threaten reality. The feud between them and their dark counterparts, the Shu'olerthae, dates from nine billion years and counting, and thanks to them having no concept of time, their war has essentially been going for an eternity as far as they are concerned. Thoi'olerthae sightings in the Onuris Universe used to be rare, but they have become a somewhat common occurrence following the most recent demon insurrections.

The Thoi'olerthae are assumed to have existed since the birth of the Realm of Dreams, making them far more ancient than they may appear to be due to their lack of technology. The earliest records of the wisps in the Onuris Universe come from the Vida'Rra, who were constantly visited by them thanks to their own link to Dream Energy. The Vida'Rranlora are the only known race in the universe to have studied them in detail, though at this point no species have access to their databanks. The Thoi'olerthae were essential in the War of Black Fog, fighting alongside the Vida'Rra against the Corruptus and eventually allowed their home realm to be used as a prison for the nightmare deity Shu'rimrodir. Following the end of the war, the Thoi'olerthae's presence in the universe diminished considerably due to them becoming occupied with suppressing Shu'rimrodir's influence over the Realm of Dreams.

The Thoi'olerthae reemerged during the Second War of Black Fog as an army led by Thea'Nhirara, created as a response for the rise of Shu'wokerama and the Marinoxidiz. The wisps fought alongside the Dracogonarious Empire and their allies through the war and eventually found themselves wiped out by Errr, before they were granted a new chance and brought back to existence by the sacrifice of Laminoula'Fuerq. The Thoi'olerthae aided in the ultimate defeat of the Corruptus and become active in the universe once again, with the Indoctrinate Collective planets of Klambah and New Draka serving as home for large populations of the creatures. Their motive for staying in such worlds is unknown, but they are assumed to be serving as sentries for potential future Corruptus invasions.

The Thoi'olerthae are amorphous creatures who can shapeshift into any form they please, but they are most often seen taking form of spherical creatures with huge beady eyes, small toothless mouths and feathered protrusions on their sides and backs with resemble wings. They move around by hovering, being seemingly unaffected by gravity and having no need to beat their wings to remain aloft. The Thoi'olerthae are entirely composed of Dream Energy and possess no internal organs other than what appears to be liquified essence, and their bodies are described as being incredibly soft and delicate to the touch, being near perfectly smooth and free of rough textures. Thoi'olerthae are genderless, but all records describe them as feminine in appearance and personality.

Thoi'olerthae are playful and welcoming creatures who greatly enjoy the presence and company of mortals, a trait they appear to universally have regardless of the individual. They are eager to please their friends by any means necessary but do not tolerate abuse of their hospitality, becoming resentful if their feelings are broken. Thoi'olerthae are known to have used their shapeshifting prowess to become involved with mortals during the ages, leading to the birth of Dream Energy-enhanced children. Thoi'olerthae become distressed and sometimes aggressive in the presence of Corruptus demons and will do all in their power to destroy them before they can cause harm.

As an Essential race, the Thoi'olerthae are masters of their related essence, the Dream Energy. Offensively, they have seen unleashing rays of essence from their mouths and creating auras which burn through demons and accelerates the healing of non-essence lifeforms. They can create tentacled appendages from any place in their bodies which can be used to operate tools or as weapons, with some Thoi'olerthae been seen using these tentacles as blades as efficient in power as vibroblades. The wisps can shapeshift into any form they deem necessary, though they are incapable of changing their size to much larger than six meters tall or long. 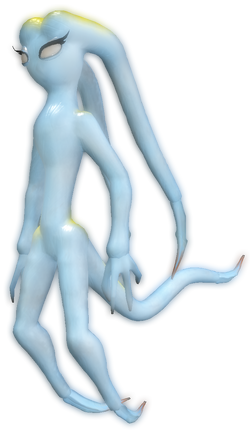 Alaromáryvaklarah, most known as Thea'Nhirara is leader of the Thoi'olerthae and the right hand entity of Sonhadromerith, the god essential of the Realm of Dreams. The greatest and most powerful of her kind, she is tasked with the training and success of the so deemed "Destined Ones", a number of mortals scattered across reality who Sonhadromerith has decided to grant the power of the Dream Energy to in order to fulfill great acts of heroism. 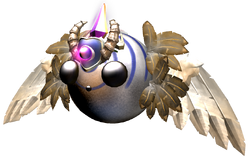 Avahlarómahlya, nicknamed Mimi, is one of Sonhadromerith's most trusted agents. Known for her child-like enthusiasm, Mimi is nonetheless loyal to her creator, who he calls "Father", and does whatever he tasks her to. Mimi was essential for the defeat of the Corruptus during the Second War of Black Fog and during the Third Xhodocto War, and is always up to fight the nightmare demons to save the lives of mortals.

“Fascinating biology which seemingly cannot be explained by our current technology. Impressive powers over their forms and the use of essence, which still mystifies our scientists. The day we understand the Thoi'olerthae will be the day we will have achieved perfection in our biological studies.”

“Reports of these wisps were not uncommon in my race's history. They have been around for some time now... And it is only fair that they admit we are such an interesting race. They should be honoured.”

“Sisters! Gorf wants play ball with sisters. Yes, you are both player and game.”

“They're soft, cuddly, and really squishy, but behind the cute outside is a power able to cleanse entire worlds of darkness and all the nasty-ass demons that live in it.”