“A Thanatyrannus is born to do one thing: rule.”

The Thanatyrannus is a large saurian species native to the temperate and heavily forested world of Maastrichtia on the very edges of the Mid Rim of the Cyrannus Galaxy. Since advancing into space, the Thanatyrannus have made a name for themselves as an expansionist and imperialistic species, carefully cultivating one of the largest independent empires in the Mid Rim prior to the rise of the Galactic Empire of Cyrannus. During the Republic Era, the Thanatyrannus maintained their independence from the democratic body and instead continued to operate their own government system under the leadership of a Rex, an absolute monarch who later ceded his control to the Empire in exchange for the position of Grand Mandator. Despite their imperialist nature, the Thanatyrannus do not tend to needlessly aggressive and have thus far excelled under the Empire.

Their government, the Sublime Tyranny of Maastrichtia was a major power in the galaxy prior to the rise of the Galactic Empire, though it retains some autonomy as an Imperial protectorate.

The Thanatyrannus evolved on the temperate and heavily forested world of Maastrichtia, a planet considered by scientists to be quite similar to the Libertus homeworld of Capricaerón with regard to the high levels of dinosaurian life, from which the advanced Thanatyrannus people sprung. As civilisations arose throughout the planet it became clear that only the strongest would survive the deadly political and military games played by the sprawling planetary empires. Nevertheless, unlike similar stages of development amongst other species, the Thanatyrannus never developed nuclear weaponry under the belief that such weapons would only damage their beloved homeworld.

Upon the unification of their race and the achievement of spaceflight in 10,934 BNE, the Thanatyrannus explored their star system for almost a century before unlocking the secrets of FTL technology, largely derived from technology left behind by the ancient Great Temoin Empire, which held sway in the Mid Rim over eight hundred thousand years prior.

Now capable of travelling beyond their celestial cradle, the Thanatyrannus expanded exponentially throughout the Mid Rim, their empire reaching across several sectors of the Mid Rim and into the fringes of the Outer and Inner Rims. These regions of the galaxy were already teeming with sentient life, which the Thanatyrannus offered either comfortable subjugation or should they refuse, the opportunity to face the armadas of the Thanatyrannus in fair combat. The most notable of these conflicts was known as the Mid Rim Wars, fought between 6097 BNE and 6000 BNE, pitting the Sublime Tyranny against the united forces of species led by the Ausare Poleis of the Inner Rim. Though the conflict would see the Thanatyrannus gain species such as the Sylvamiman as thralls, the conflict would not end in their favour and would be one of the cornerstones which led to the rise of the proto-galactic government known as the Federation of United Worlds.

Their pride bruised, the Thanatyrannus refused an invitation to foster peace in the galaxy's interior by joining the Federation and instead continued to expand of their own accord throughout the neutral regions beyond the Federation's grasp, at times bringing it into conflict with rogue Basileus flotillas near the Outer Rim's border with the Mid Rim. The Thanatyrannus would also wage war against the Adlapuspino during the Thanatyrannus-Adlapuspino War in 5100 BNE when the latter mistakenly attacked a Thanatyrannus civilian vessel. Though they failed to conquer the Adlapuspino, they succeeded in halting their expansion into the Mid Rim. Though their expansionist demeanour prompted annoyance from the races closer to the Core, the Thanatyrannus also went to great lengths to ensure that their legacy on the galaxy was positive, cultivating pre-space flight civilisations they considered to have potential by observing them from afar, ensuring that they could develop to a point where they could benefit the Sublime Tyranny as a whole.

Over the subsequent millennia, the Thanatyrannus would alleviate their aggressive conquests of other species though would continue to hold dominion over the Sylvamiman people until they were granted space flight capabilities and independence in 596 BNE. Nevertheless, they still refused to cooperate with the galactic government, even when it transitioned into the United Republic of Cyrannus in 53 BNE. They did however warm to the Republic when it began expanding into other galaxies under Presidents Fleur Inviere and Apollo and many would admit a begrudging respect for the Libertus as a result. Under the newly coronated Rex Deinorax, the Sublime Tyranny would become increasingly liberal and began giving its client races a greater say in the running of their government. Deinorax also opened diplomatic relations with the Corthrinus Empire and would go on to favour the Republic over the Confederacy of Allied Systems during the Great Cyrannus War.

During the closing stages of the Great Cyrannus War, the future Emperor Tyrómairon had been in secret contact with many galactic leaders in preparation for the eventual formation of his new order, such as Imperator Tyranus, Savra Mathen and the Rex of the Thanatyrannus, Deinorax. Though the Thanatyrannus had been historically distrustful of central government, Tyrómairon managed to convince Deinorax that the way of the future was the way of the Galactic Empire of Cyrannus. Joining the Empire upon its declaration on Orbispira, many Thanatyrannus were initially sceptical of this new government, only to be swayed by the raw power and might of the Empire. Over the subsequent years of Imperial rule, Deinorax became the Grand Mandator of the Southern Mid Rim while the leader of the military forces of the Thanatyrannus, Tophoneus, was appointed as a Grand Admiral of the Imperial Navy.

Descended from smaller feathered theropods, Thanatyrannus evolved on the lush flood plains of Maastrictia's largest island continent as the region's apex predator, using its bone crushing teeth and highly advanced brain to track down and kill their prey. Like all theropods, such as Dromeourus and the Libertus, Thanatyrannus is closely related to avians, with some groups native to the colder regions of Maastrictia commonly being adorned with protofeathers. Thanatyrannus has a relatively large skull supported by a short neck, relatively small forelimbs with two digits, strong legs and feet and a long and heavily built tail serving as a counter weight to the large head of the species. Thanatyrannus tend to grow up to six metres in length and healthy individuals can weigh up to six hundred and seventy kilograms, making them relatively large for a sentient species.

Culturally, the Thanatyrannus espouse a view that evolution is the driving force of life in the universe and that the strong must dominate the weak in order to prosper and survive. This view has strongly dictated their policy in interacting with other species, which can be seen in their conquest of the Sylvamiman and their conflicts against the Ausare and the Adlapuspino. Nevertheless, they do not tend to be barbarous or blood thirsty conquerors and adhere to a strong code of ethics which mandates the fair and comfortable treatment of enemies defeated in fair combat or innocent citizens inhabiting worlds conquered by their mighty war machine. Though the Thanatyrannus revelled in conflict, before absorbing a civilisation into their empire, the Thanatyrannus would always give the option to resist, though more often than not, choosing this option would result in subjugation. The Thanatyrannus justified this by claiming that any race who could successfully defeat them in war would be worthy of their admiration and respect. 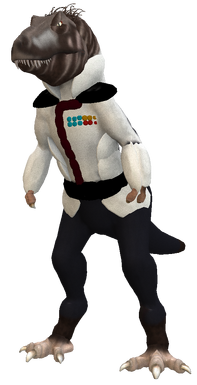 “They have earned the respect of my people, an accomplishment shared by few.”

“We have not forgotten your treatment of other species in the past.”

“A mockery of my people. You will learn the meaning of strength as your worlds burn to a cinder.”

“But how can they pilot spaceships without thuuuuumbs.” 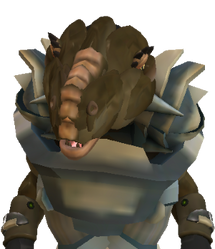 The previous iteration of the Thanatyrannus.
Add a photo to this gallery

Retrieved from "https://spore.fandom.com/wiki/Creature:Thanatyrannus?oldid=769006"
Community content is available under CC-BY-SA unless otherwise noted.