“When they cannot love, they fight. Disgusting humanoids.”

The Tezelteän are a humanoid race, distinguished by their purple skins. The species was originally native to the Quadrant Galaxies, but thousands of years ago, an analomy transported their world to the Cyrannus Galaxy, where they currently inhabit. Before joining the United Republic of Cyrannus, they had a small kingdom near the outer borders of the URC , and as such were members of the Federation of United Worlds. Nowadays, they are members of the Galactic Empire of Cyrannus.

The Tezelteän are passionate and hot temperated, and are well known members of the galactic community. The Tezelteän's can be found all over the Empire, from low ranking classes to high ranking classes, such as captains and senators. Female Tezelteän's are known for their beauty and are often targets for slave traders.

Once, in a distant history the Tezelteän evolved at their home planet within the Quadrants. A lush and green planet, with hot tropical temperatures and endless rainwoods. Over time the Tezelteän reached their tribal area and began living near the rives, where the temperatures were less hot during nights and close to a suitable fooding area, like fish and hunting animals who wanted to drink from the rivers.

Their early tribal homeground reflects the way the Tezelteän are living in modern times. As they advanced their cities grew larger, spanning bridges from one side of the river to the other the Tezelteän began living in river cities, sometimes entire delta's had multiply bridges and areas to live on.

Somewhere during their tribal time a disaster struck the Tezelteän homeplanet. An immense anomaly hit the planet and due to some wonder, the planet was transported to the Cyrannus Galaxy. Though the Tezelteän did not realise the moving of their planet they reffered to the event as the great light, which destroyed various tribes and let some of the ancient animals to extinction.

As the Tezelteän advanced into space, they were still catious of the great light and for that reason their cities were still were located near rivers and coastlines. The Tezelteän' refused to go building cities inland- believing that it would mean more destruction to their precious rainwoods- who the Tezelteän began to see as a cultural heritage. Another reason for not building inland was the fear of a second Great Light.

As the Tezelteän began exploring space, they soon encountered the Federation of United Worlds with whom they began trading with. However they refused to join them as they believed the goverment to be too corrupt.

Sadly, this meant that slave traders had an easy target at the Tezelteän, and often their females were abducted and sold for slavery due to their beauty. In 10 BTC they joined the newly formed United Republic of Cyrannus and enjoyed a period of wealth and growth. Some members even joined the Republic Navy as captains and commanders. The Tezelteän were happy that their planet did not came under attack during conflicts like the Second Galactic War, the Intergalactic War and the Great Cyrannus War. Sadly, during the latter a number of Tezelteän starved due to the trade routes being hammered by fighting URC forces and Confederate forces.

When in 01 NE the Galactic Empire of Cyrannus was formed the Tezelteän remained members of the "new URC" and believed the Emperor would bring back order and peace. And he did, though the Tezelteän at whole frowned upon some decisions like attacking the URC close allies Rambo Nation and expelling other non Cyrannus native empires. When the New Cyrannian Republic was formed in 03 NE, may Tezelteän became members.

The Tezelteän are biologically unimpressive compared to many other Cyrannus Galaxy races, being similar in many ways to other Cyrannian and Quadrantia humanoids, such as the Alavar. However, the Tezelteän are distinguished by their purple/pink skin tone, and are known across the Cyrandia Cluster for their beauty and majesty. Tezelteän are also capable of producing powerful pheromones, that most mammals cannot resist, in order to improve their attractiveness and likeability. Most Tezelteän are in excellent physical shape, and shun forms of unhealthy living.

Tezelteän society is famous across Cyrannus for the importance of love and sexuality among the race, with many of the Cyrandia Cluster's most racy pieces of art and literature having Tezelteän origins. Famously liberal in regards to love and romance, Tezelteän show no differentiation between bisexual, heterosexual and homosexual relationships. Often viewed as hedonistic, Tezelteän place a great importance on pleasure, shunning negative emotion. Despite this, they are often seen as great warriors and their hot-headedness is infamous. 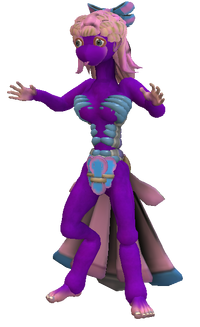 Xora is a female Tezelteän, hailing from the Cyrannus Galaxy and citizen of the Federation of United Worlds and later on the United Republic of Cyrannus. Xora is described as an attractive Tezelteän, known for her passion and hot temperament when angered. Yet, unlike most of her people- Xora is quite calm and controls her emotions very well. She is a cunning captain, has a decent insight in battle tactics though lacks any physical battle capabilities. 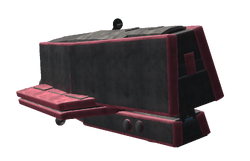 The Tezelteän Cruiser is a small civilian ship that is often found in civilian convoys, transported cargo and passengers across the stars in relative security, due to a system of light laser cannons that are dotted across the ship, as well as very fast engines and strong shields. Many of these ships have found themselves in the Republic Remnant.

“Their demeanor is disturbing to say the least.”

Retrieved from "https://spore.fandom.com/wiki/Creature:Tezelte%C3%A4n?oldid=768982"
Community content is available under CC-BY-SA unless otherwise noted.