The Sumikians are a race of entities native of the jungle world Sumik on the fringe of the Imi-Xal Sector of the Tuuros Galaxy. Notoriously meticulous with detail, especially numbers, the Sumikians are also a stereotypically selfish race that are able to bend the rules of business and economy to their interests, and thus have a strong economic foothold throughout the Tuuros Galaxy. Their seat of power is the Sumikian Commerce Nexus, which is considered one of the main trade hubs to the more civil populace of the galaxy. Another, arguably stronger economy run by the Sumikians is the Nijusi Syndicate; a network of criminal organisations ran by a single Sumikian known as Tuk Nijusi.

The Sumikians originated from the verdant world of Sumik in the Imi-Xal Sector, which neighbours the Pal-Tala Sector, The Core Region and the Schism. The Sumikians have been spacefaring for approximately 14,500 years; originally known as the Sumikian Confederacy of Planets within the Imi-Xal Sector. As they had become spacefaring, it immediately became apparent that the Schism was an inaccessible zone to them, and thus, the Sumikians sought exploration across the other half of the Tuuros Galaxy. As trade and commerce increased, the Sumikians had eventually evolved into the Sumikian Commerce Nexus around 1,000 years ago. The formation of the Commerce Nexus however had caused a political rift within the Sumikian race itself - giving birth to the Nijusi Syndicate. The result of the Nijusi Syndicate was civil war that had lasted for nearly thirty years - with Tuk Nijusi, the head of the Syndicate leading many raids and invasions across the Sumikian territory further away from the Imi-Xal Sector.

The Xittan-Yaton Sector, upon the distant edge of the Tuuros Galaxy was originally a part of the Confederacy's territories, and Nijusi had sought to control the entirety of it due to its distance from the Sumikian homeworld, and succeeded, ending the civil war and splitting the economy into two. Whilst both economies remained strong, the Commerce Nexus was weakened somewhat more due to its main outposts becoming a part of the Nijusi Syndicate. Tuk Nijusi had therefore fortified his territories, as well as synthesising more trade hubs within his territories and establishing a façade of a legitimate economic ethic; although much of his downplayed criminal activities such as piracy and trafficking were known. Over time, Nijusi's influence has increased dramatically and his galactic presence in the media has been glorified past the truth, and has become one of Tuuros' richest, and in extension, most terrifying individuals.

The Sumikians are known for their very short stature; at the most, Sumikians stand only at four feet in height. Their skin colour, rubbery in texture is mostly purple although skin shades can mutate towards either blue or red. Due to Sumik's humid and dense environment, Sumikians are accustomed to similar environments and it is common to see Sumikians with supporting equipment to help them acclimatise or survive in colder and drier environments across the galaxy. Sumikians have evolved to be expert at acrobatic movements and are masterful in scaling vertical environments, and whilst their physical fortitude allows them to do this, they are physically frail overall in comparison to many races across the First Gigaquadrant.

To counteract their frailty, Sumikians are highly analytical as a result of discerning many forms of life on their homeworld, and have cultivated this ability in order to manage and organise multiple elements regarding mathematics in the contemporary galaxy. The most notable characteristic of the Sumikians is their lifespan; they are incredibly long-lived, as some Sumikians are known to have surpassed three thousand years in age. It is however thought that many Sumikians are technologically prolonging their lives and their actual lifespan may be closer to one thousand years.

Due to their analytical nature, Sumikians are quick to think and often make accurate judgements on sufficient information. They are also fast-talking, although not to a point where they are difficult to understand. However, their analytical nature goes hand in hand with ulterior motives of which they are known for - as their evolutionary psychology dictated them to become calculating in their methods to survive on their homeworld, the Sumikians retain that similar psychology in order to retain a sense of superiority over whomsoever they come into contact with.

The geopolitical environment of the Tuuros Galaxy is rife with xenophobia; the Sumikians themselves possess some level of xenophobia towards the Enaphrosians and multiple Schism-races, although have other prejudices against the Vranntan for their larger stature and relatively inferior intelligence. They have some sense of respect for the Nanusuloans, although their personal respect often does not dictate any leniency in their manipulative negotiation methods. 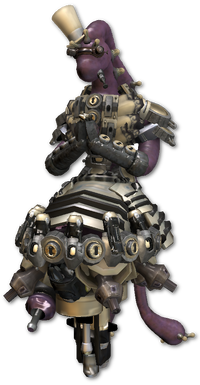 Tuk Nijusi is a galactic crime boss and the head of the Nijusi Syndicate. Arguably the richest individual in the Tuuros Galaxy by both worth and control of assets, Nijusi has seen the manipulation of the arms market and multiple other commercial markets passing through the Xittan-Yaton Sector for over a thousand years. He is also the host of the annual Tuuros Galaxy Theater Festival - a misleadingly named gladiatorial bloodsport event - that often intakes exponential sums of money for his benefit. Nijusi is considered one of the galaxy's most powerful individuals, so much so that the galactic media itself has portrayed his benevolent side - although many quieter opinions deem him the worst thing to have happened in the galaxy since Lord Zhuleshxi.

“You and I have little to talk about.”

Ped Dijun is a galaxy-known assassin who has garnered a reputation as the Silver Ghost. He is Nijusi's personal hitman, who often works on undercover operations to shift the power balance into Nijusi's favour. It is known that Nijusi and Dijun have an uneasy partnership that is only held together by a comfortable and large sum of money.