“That Which Devours came, and left behind terrible things. That Which Spawns from his skin, a swarm of violent, biting and gnawing abominations which sucked the souls out of men and took over the bodies of others, turning them into rotting puppets. And once they fed, they begun multiplying, spawning even more of themselves at an alarming rate. Dealing with the forces of nightmare was hard by itself, but to deal with these creatures in specific... was impossible.”

The Shu'olerthae (Vida'Rra: That Which Spawns), also known as Nightmare Folk or Nightmare Wisps, are the most primal species of Corruptus Demon and the Essential race of Nightmare Energy. Created from splinters of Shu'rimrodir's energies which developed life of their own, they are the most numerous race of nightmare in the Corruptus and are generally considered its most important species. All attacks launched by the Corruptus are sure to involve these malevolent creatures, who will use all in their power to cause as much mayhem and destruction as they can in order to feed on the vital energies of their victims.

The Shu'olerthae race was created when Shu'rimrodir was descended by the Xhodocto Eye Diafthora, eleven billion years in the past. Out of reaction of obtaining his new powers, the newly risen Demon God begun creating numbers of races which would serve him, and the Shu'olerthae would be those born directly out of his flesh, splinters of his Nightmare Energy which escaped his aura and were given minds of their own. The greatest of these creatures would merge their bodies and energies into one in order to become Shu'suvreca, a demon of god-like proportions who would become one of the leaders of all Corruptus Demons. Like all other nightmare races, the Shu'olerthae found themselves further improved following the Annihilation.

Shu'olerthae are spherical creatures whose bodies are covered in a thick layer of red and black scales. A total of fourteen red eyes stand above a mouth made up of several fanged teeth which can extend well beyond what one would expect of creatures of their size. Shu'olerthae possess rows of spikes on their backs which extend up to their long, armored tails, with some of those serving as protection for their Corruptus Hearts, which are located on their foreheads. Several tentacles sprout out of their sides, giving the faint impression of wings. Immature Shu'olerthae are among the smallest Corruptus Demons in height, but are known to be notable lengthy thanks to their tails and tentacles.

The Shu'olerthae are a standard from which most other Corruptus Demons behave like; they are vehemently aggressive creatures who detest the presence of mortals. However, unlike other races of lesser demons, they are sapient and rarely charge head-on into danger, often communicating to each other and to other demons through their own languages in order to devise strategies on how to exploit enemy weaknesses. As direct spawns of Shu'rimrodir, the Shu'olerthae are highly revered by mortal servants of the Corruptus, leading the creatures to be arrogant and to look down on other Corruptus Demons, causing them to sometimes be at odds as a result. The Shu'olerthae possess a particular hatred for their angelic counterparts, the Thoi'olerthae, for believing them to be insulting mock-ups.

As one would expect from a Corruptus Demon, Shu'olerthae are adepts at using Nightmare Energy, using the essence with great effects with the use of their many tentacles. In close range, they also make use of their teeth in combat, which has been seen passing through armor and ripping at the victim's flesh.

Their most known abilities, however, include fusing with one another in large numbers in order to assume a more powerful form known as a Shu'lorangar (Vida'Rra: That Which Amasses), and devouring the souls of mortals for sustenance, turning their bodies into mindless, zombified thralls widely known as the Kikra Caste. Shu'olerthae sometimes possess the bodies of Kikra zombies for transportation or to ambush attackers, but the creatures are considered cannon fodder and are not maintained by the demons, who eventually leave them to rot and die out. 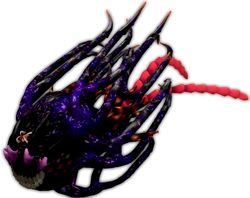 Shu'suvreca is a Shu'olerthae demigod who acts as the third-in-command of the Corruptus. The greatest of the Shu'lorangar, Shu'suvreca is famed as a mythical abomination who devours entire planets in a single bite. And these are not mere legends, for his colossal size, greater than whole worlds, make him among one of the most feared of all demonkind. 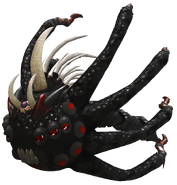 The appearance of the Shu'olerthae prior to the Annihilation 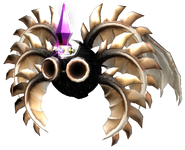 First model of the Shu'olerthae 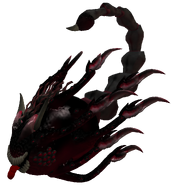