The Alovahmeeralum, most known as Seraphim Serpents are the most powerful Dream Energy-based lifeforms existing in the Realm of Dreams, serving as the defenders of the plane from outsiders at the cost of being unable to leave it, making their existence almost completely unknown to mortals. They are the greatest servants of the Dream God Sonhadromerith, though also his least numerous.

The power of the Seraphim Serpents is enough to dwarf that of other Dream Energy beings like Thea'Nhirara or Destined Ones like Hachiman. However, they are tasked to defend the Realm of Dreams from inside out, meaning they cannot help their dreamy companions in the mortal plane at any circumstances, for it takes only a second of lost concentration for the Realm to be breached by the forces of the Corruptus. As of now, it is assumed no living mortal empire is aware of their existence.

The Seraphim Serpents are assumed to have existed since the birth of the Realm of Dreams, making them far more ancient than they may appear to be due to their lack of technology. Alongside their diminutive brethren, the Thoi'olerthae, they are said to have built the foundations of the Realm and have watched it ever since. Despite having never left the Realm, partially due to being incapable to, they were nonetheless fundamental in Shu'rimrodir's imprisonment, with the Thoi'olerthae spreading tales that eight Seraphim Serpents whose scales were made of radiant diamond wrapped themselves around the demon lord's neck, arms, legs, wings and tail in order to leave him completely immobilized for eternity. It was only through feeding on the victims of the Second War of Black Fog that Shu'rimrodir obtained the strength to destroy these eight Serpents and free himself during the final hours of the war.

The group who ventured into the Realm of Dreams during the Third Xhodocto War did not come across any Seraphim Serpents due to Sonhadromerith's 'death' having caused them to be erased from the Realm altogether, though they have since been recreated and currently resume their task of protecting the plane from the Nightmare Region. It is believed Shu'ytrogarva managed to attack Sonhadromerith by waiting for all Serpents to blink in unison, which gave him the opening he needed to attack the deity head on in a fraction of a second, proving that despite their immense power, the Serpents are not infallible.

The Seraphim Serpents take the form of gigantic serpentine creatures, described as looking like winged snakes or wyrms, with scales coloured like the rainbow. Four eyes made of fire are present in their heads as well as many horns shaped almost like crowns. The Serpents can be as big as they wish, not being limited to any laws of physics inside the Realm of Dreams due to having complete control over its laws themselves. On their 'chests' is a Dreamy Heart which beats loudly, echoing through the Realm, and it is said all Serpents beat their hearts at the same time at all times.

As there are no records of mortals ever encountering Seraphim Serpents in person, the only description of their behaviour comes from Thoi'olerthae who are willing to share information about them. The wisps describe the Serpents as aloof and with a permanent air of seriousness, being a contrast to other Dreamy creatures who tend to be good-natured and altruistic. The Seraphim Serpents see the protection of the Realm as their sole duty, and deviating from it does nothing but endanger their home land to being breached by nightmares again.

According to the Thoi'olerthae, the Seraphim Serpents are the greatest Dream Energy beings of reality, second only to Sonhadromerith himself. They shape and reshape the Realm of Dreams as they see fit and have enough power to keep an Essential God like Shu'rimrodir imprisoned in the realm until he received external help. The Thoi'olerthae consider the idea of a mortal glaring at a Seraphim Serpent as dangerous, as according to them, doing so will cause the mortal in question to be rendered insane due to not being able to grasp upon their sheer majesty and magnitude.

“I've only ever heard of them, but the Seraphim Serpents are something... beyond most people, including myself. They do not like to talk and they have almost absolute control over the Realm of Dreams... but I'd still like the chance to bother one someday, heh.”

“Apparently, they taste quite nice - like a lot of sugar. But they're so boring I imagine it has a hint of salt. And...well. No one likes a boring guest at the table. Or a boring dessert...definitely not.” 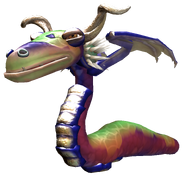 First model of the Seraphim Serpent