“At first, I believed them to be mere leeches. However, since the end of the reign of their tyrant emperor, I have learned their race and mine are quite similar. They merely use the tools provided to them since their birth, and to blame for them that is folly. I am now their new leader, and I will be glad to lead them into a new era of prosperity.”

The Seagon are a mysterious species of fish creatures natives of Planet Clexis, located at the Friura Sector of the Borealis Galaxy's Eastern Arm. They are widely famed for having evolved in a former colony of the Kormacvar, and evolved around their ruins while basing their technology out of theirs. This has led the Seagon to, despite their young age and small size, become one of the most technologically advanced civilizations of the galaxy's history.

Formerly an openly hostile race under the rule of a bloodthirsty emperor, the Seagon are currently led by an unknown figure who has taught them to be pacified, and today they are one of the most important races of the Polar Crystal Alliance. Their secrecy and generally cold behaviour makes them distrusted and sometimes feared by outsiders, but the Seagon are ultimately benevolent and strive for the rise of an orderly Borealis much like the rest of the Alliance.

The Seagon hail from Planet Clexis, located at the Friura Sector of Borealis' Eastern Arm. Clexis was, five billion years ago, a thriving colony of the Kormacvar and as such, the planet was filled with Kormacvar artifacts and working pieces of their technology. Being uplifted and evolving around these artifacts, the Seagon advanced extremely fast compared to all known Borealis species. They would achieve space travel at around the Earth year 9,700 BC under the name Seagon Empire, which would be their empire until the Second Borealis War. Upon leaving their homeworld and expanding through the cosmos, the Seagon grew greedy and uncaring for aliens, desiring to hoard more and more Kormacvar technology for themselves so they could eventually reign supreme.

For manipulation purposes, the Seagon would become allies of the Wranploer, and as their empire grew, they grew an immense rivalry with the Niaka. When the First Borealis Galactic War happened, the Seagon aligned itself with the Wranploer Legion for the purpose of using them as a meat shield against the Zoles Imperium, this alliance consolidating the Seagon's place as enemies of the galaxy. At the end of the war, the Seagon Empire retreated back to their territory, where they plotted their next move on the galaxy, occasionally helping the Wranploer to keep them on their side. During the later stages of the Second Borealis Galactic War, however, the Seagon revealed their true colours and betrayed the Borealis Consortium Network, declaring war on the entire galaxy.

All the Kormacvar technology the Seagon hoarded through their spacefaring time gave them access to the Kormacvar superweapon known as Project Armageddon. The Seagon Empire, under the rule of the tyrant emperor Rothneld Vhezari, attempted to submit the galaxy to their feet through fear by overpowering the Zoles and the Wranploer with Project Armageddon. However, the superweapon was later stopped by Arkarixus and his team, who killed Rothneld Vhezari and ruined the Seagon's plans. The Seagon people would then surrender to the galaxy and sent its empire to a state of complete seclusion for the following months, until they re-emerged, now as the Seagon Cryptocracy, and joined forces with the Zoles Imperium and their allies.

Following the end of the war, the Seagon people began being seen with a new light by the galaxy. Their rivalry with the Niaka died out with the defeat of the Old Niaka Order and they were also accepted into the Polar Crystal Alliance's Council. The Seagon have become one of the most major species in the galaxy, and even with the emergence of civilizations such as the Rovegar Matriarchy and the Zarkhator, the Seagon remain one of the most technologically advanced species in the entire galaxy.

The Seagon are large humanoid fishes. They range from 2,6m to 3,0m in height. Their scales have vivid blue, purple and pink colouration, with the colour changing from their waist down. Their heads possess impressive sets of horns and small tentacles. At their chests, they possess a strong bony plate which acts as a natural shield for their internal organs. Their limbs are muscular, their feet are webbed and their hands appear have large, spiky, almost skeletal fingers. Seagon have notable sexual dimorphism, with females having a darker colouration and more tentacles on their heads than males.

Seagon are naturally cold, unwelcoming and secretive creatures who prefer to keep to themselves. Recent events have caused them to warm up on the other races of the galaxy, but they are still not among the friendliest species in the Polar Crystal Alliance. They notably refuse to explain how their government works to all aliens, which causes them to be distrusted among diplomats. Their trait of evolving around Kormacvar artifacts has given them the stereotype of being "favoured children" of the Kormacvar, or even leeches who only crave for more technology.

Being fishes, Seagon are exceptional swimmers and can breath underwater. They possess toxic venom on their hands, which can be transmitted through scratches or stabs. Despite their seemingly frail frame, the Seagon are actually quite physically strong and can easily keep up with creatures such as Zoles. One downside of their spiky, combat-oriented hands is a lack of dexterity, and also the difficulty in making physical contact with other aliens. 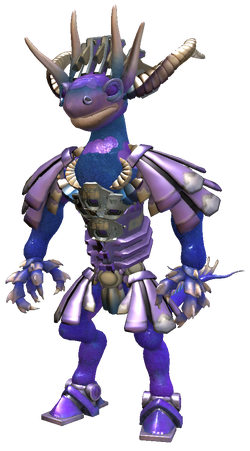 “Under my guidance, the Seagon will be seen in a good light at last.”

Rylarien Vhezari is the councillor representing the Seagon Cryptocracy in the Polar Crystal Alliance. Despite being Rothneld Vhezari's sister, she had no involvement on his decisions and was also opposite to his power-hungry attitude. Rylarien is a kind woman who wishes to make the Seagon be been without distrust, this being rather hard considering her empire's actions in the Second Borealis War and her refusal of explaining the Seagon government in details. 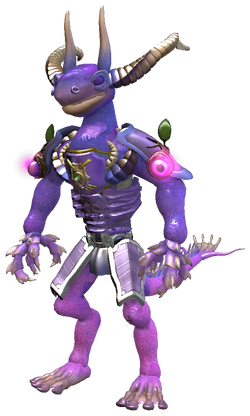 Sergeant Trastius is the successor of Manulin and the military leader of the Seagon Cryptocracy. Emerging out of nowhere during the Second Great War, Trastius was responsible for the end of the feud between the Seagon and the Niaka Special Forces as well as the race's membership in the Polar Crystal Alliance. Trastius is as much of an enigma as the ruler of the Seagon race, and many speculate he is actually the current emperor of the Cryptocracy. Trastius, however, denies this completely. 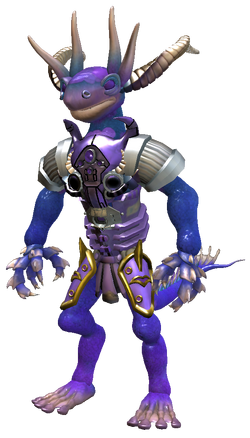 “You'll be going home in a box if you keep that up.”

Vesinash is a Seagon sniper who once served as one of the assassins for Rothneld Vhezari, having been trained from birth by a clade of Seagon black-hands to hunt and kill targets from afar. After the death of Vhezari and the dissolution of the Seagon's tyrannical reign, Vesinash applied for work alongside the rest of her colleagues and comrades within the Polar Crystal Alliance, putting their skills to use via serving as bodyguards and crewmates for Penumbrans. Vesinash prefers action to diplomacy and often comes to blows with her colleagues due to her hot-headed nature, yet she is not irrational and will consult logic in a situation if need be. 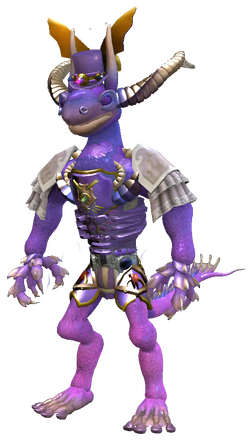 “Borealis will be mine, no matter the cost!”

Emperor Rothneld Vhezari was the final and most known ruler of the Seagon Empire. An incredibly power-hungry individual, he attempted to use Project Armageddon during the Second Borealis Galactic War to surrender the galaxy to his will. However, he was eventually killed by Chief Major Xerkea. His death would lead to the Seagon Empire's dissolution and later re-emergence as the Seagon Cryptocracy. 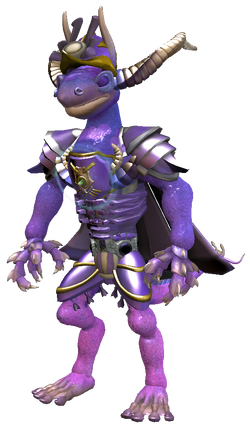 “You will all die as we order you to, aliens!”

Sergeant Manulin was Emperor Vhezari's right-hand servant in the Seagon Empire. Famous for being extremely short-tempered, Manulin was a racist man who wished for Seagon domination in the galaxy. During the Second Borealis Galactic War, he aided Emperor Vhezari into recovering Kormacvar artifacts to build Project Armageddon. He eventually confronted Vekaron's team in combat in a Kormacvar vault, and was brutally killed in combat by Arkarixus.

“A great people, the Seagon, though they have had their dark pasts, like all of us.”

“I wouldn't mind some "fish cakes", if you know what I'm saying.”

“They are scavengers who think themselves inheritors of an ancient legacy. How quaint.” 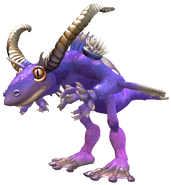