“We hunger for knowledge, for it is power.”

The history of the Saurornithanta is generally unknown, even to themselves. It is believed that their homeworld of Carinateron was a temperate planet of lush plains and forests, until a time when a huge ice age struck the planet, plunging it into freezing weather. The Saurornithanta, however, adapted to these conditions and began to prefer cold environments. Over periods of thousands of years, the Saurornithanta finally reached the level of space travel, sending drones into deep space that aided them in the development of hyperspace technology.

As the Saurornithantan Dominion started to spread into space, their major reason for doing so evolved from greed to a wish to impose order over the chaotic expanse of space. As the Dominion expanded, they remained unknown to Galactic Governments, and operated in complete secrecy and isolation, unknown from the rest of the galaxy.

However, their isolation was about to end, when a Corthrinus ship made contact with a Dominion spacecraft. Despite the differences between the two factions, an alliance was eventually made. However, neither side truly trusted the other. A much more disastrous first contact would occur several years later when a Venator-class Star Destroyer of the United Republic of Cyrannus accidentally entered Dominion Space. The Dominion perceived this as a threat to their existence and attacked it.

However, the situation was eventually cleared up and both factions enjoyed an uneasy truce.

When the Galactic Empire of Cyrannus was formed, the Saurornithanta joined, hoping to keep the peace in the Unknown Regions. This soon became known to Tyrómairon, who made the Saurornithanta Bri'sa'tana, Grand Mandator of the Unknown Regions. Now, the Saurornithanta are attempting to defuse the hatred between the Mortalitas and the Corthrinus. Due to the faith in science and espionage that the Saurornithanta place, they were caught unprepared for a large invasion of their homeworld by the Cyrannian Imperial State during the first month of the New Cyrandia Wars. Laying siege to the planet, Zillum managed to infiltrate the capital city and kidnap Grand Mandator Bri'sa'tana, though ultimately the arrival of an Imperial fleet led by Grand Admiral Carandial managed to win the day for the Imperials, with Senator Celeborath becoming the leader of his people in Bri'sa'tana's absence.

Highly intelligent and naturally inquisitive, the dictum "knowledge is power" is particularly relevant in studying the mentality of many members of this mysterious race, with the Saurornithanta preferring their wars won before they even begin through their extensive skills in the arts of sabotage and infiltration, making many Saurornithanta top agents in Imperial Intelligence.

There is a prevailing opinion among others species that the Saurornithanta that they are xenophobic and dismissive towards other species. However, it soon became clear when the Dominion was replaced with the Empire that this stereotype stemmed mainly from the actions of the Saurornitanta government, which was vehemently anti-alien. Most Saurornithanta are curious about other species, which became clear when they began spreading across the Empire.

One of the most powerful Mandators in the Empire, Bri'sa'tana is a highly influential politician that has long been an advocate of galactic civilisation being essential for the Cyrannus Galaxy, which prompted many of his fellow Saurornithanta to brand him as a renegade politician. Despite this, he soon found himself in the good graces of Tyranus, and was promoted to Grand Mandator after the near war between the Mortalitas and the Corthrinus. 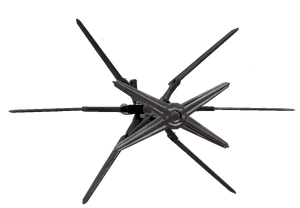 One of the most deadly ships in the Unknown Regions, the Prowler is believed to be quite capable of battling almost any enemy up to the strength of a Neraida Cube, which is capable of destroying a Prowler. The Prowler-class is a common ship in the Unknown Regions, and has been used by the Saurornithanta for well over 5,000 years. However, since the creation of the Empire of Cyrannus, the Prowler is rarely seen outside Saurornitantan space, with their military prowess being transferred to that of the Empire.

“A strange species, we are unsure of their overall intentions”

“Cunning, smart, they could prove useful in the Southern Rim Campaign, that is, if they wish to co-operate”

Retrieved from "https://spore.fandom.com/wiki/Creature:Saurornithanta?oldid=696359"
Community content is available under CC-BY-SA unless otherwise noted.