The Reckzo are a small empire. They do not intend to start wars, and instead try to ally with everyone they meet.

Note: I know they have a cell mouth but behind there is a monkey mouth, so that's why they have level 4 sing and bite, this shouldn't affect taxonomy.

Their main star is VI Cipho Minora, a blue star twice the size of Sol. It is estimated to end in around 3.4 billion years, and once it does, it would explode in a spectacular supernova of blue, red and possibly a bit of green. By then, expect the Reckzo to be somewhere else.

The Planet has 2 moons; Jop and Lai. They are both colonised by the Reckzo and again are very green. They contain alot of rainforests, full of creatures like Frank and some Dinosaurs for some reason. The Reckzo claim they got these Dinosaurs from a video game on a planet called 'Earth' in a galaxy called 'The Milky Way' in another dimension... one of these 'Dinosaurs' (though called 'Dojinos' by the Reckzo in their language) is called a Devilsaur or 'Devlijinos'.

These small creatures are similar to the Reckzo, but not exactly. They have the regular feet, flagella for hands and similar Reckzo colouring (Greyish Purple).

They evolved alot here. At first they were pretty small and weak. They started to evolve arms. The arms were simple, with those long fingered graspers and the feet were starting to get more complex. Over thousands of years, they evolved stronger muscles and a bigger brain. The hands also evolved into more complex graspers. The feet were evolving into dinosaurian type feet. The chest was also getting bigger. The final form was big, about the size of a man. It had more muscles and the parts were bigger.

The Reckzo started to figure out how to create tools such as horns and spears. They later did shields to protect themselves and a huge cape. They mostly allied with tribes, though they did take over one brown tribe.

Shortly after the allying with the four tribes (and conquering of the brown tribe), they start to build cities. The Cities had resemblances with the Reckzo like the two 'Connectors' which resembled the eyes. They also had colours based around the Reckzo (Purple and Blue).

They took over every city and every spice geyser. They started to build a Spaceship creator shortly after. They then created the Seven Rules:

The seven rings on the Shield represent the Seven Rules with the last rule being the middle ring.

The Reckzo worship a God known as Reilockoz. They believe he created the Galaxy and spread life to chosen Planets, such as Laifoz, Ppopp-93 and Heikzorki. He is believed to be in the center of every planet, keeping the planet stable by holding the 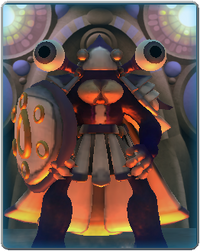 core in place, this is their way of explaining cube planets. Beings that believe in this religion are known as Heijokz. The Reckzo are Cootlico Heijokz, meaning they accept science as well. They pray around 3 times a day and each pray is different:

“None shall be better,

Not one shall be lesser.

All shall be one

Even though a peaceful race the Reckzo may be, they still need some protection. They use extremely super powered guards, mutated versions of Reckzo, technically making them a different species. They have a lot of weapons and a powerful shield and are around 10 times bigger than a normal Reckzo citizen!

These friendly creatures now always start at a +70 relation, so allying is extremely easy.

The way the Reckzo ship Koi-22 travels through the universe is a way known as 'Warping'. They use special technology to bend space around the ship, so the ship doesn't have to waste as much energy as travelling FTL (though warping still requires massive amounts of energy).

The Reckzo only have a 100 m radius bomb because they don't want to severely damage a planet. They also discovered a Planet Slicer - that slices a planet in half. But they obliterated it from time using telekinesis.

The Reckzo are trying to completely wipe out the Grox, and so far they took out 1000 systems.

The Reckzo's special shield is able to resist a planet buster due to the fact it's made by of the hardest material found in the universe. However, to protect the whole planet from such a planet buster, they need to have at least half the planet covered with the shields.

They use extremely high technology to bend space. The way it works is this; they go to a black hole and go in an orbit. Once orbiting, they turn on 'Store Gravitational Energy', and collect some gravity. Once finished, they hurry before the black hole expands back into a star and engulfs them, and turn on 'Warp Drive Mode' and start modifying space to bring them to a wanted location.

The Reckzo know how to make wormholes that can travel distances far greater than using warping. They use solar panels covering their sun to try and create a massive hole in space. The problem is, it needs to be stable. They keep it stable by creating their own stars using hydrogen to power the wormhole as long as they can. By doing this, they are able to travel far distances. They can also travel to a different universe, however this means harnessing the power of the largest star in the galaxy; VY Canis Majoris.

They know how to make cloning machines. They're not perfect, but most is correct. They take sample DNA from a subject and place it in the machine. The machine scans the DNA and predicts how the rest of the DNA should look. The machine then creates a near perfect artificial copy, and once it's done the first clone of the subject (around a minute), the machine inserts the information into its database, so now it only takes around 5-10 seconds to create another clone.

These are machines made by the Reckzo to protect their land if the guards and ships aren't enough. They come in massive numbers, and are a big bigger than a normal Reckzo. Their structure is based of the Reckzo, and are made from a type of energy called Decoinagoginal Energy, a rare energy made by converting Reality's energy into pure, single energy.

A Red Reckzo is a rare type of Reckzo that is slightly bigger, slightly more powerful and intelligent and has Red Skin. Some have been seen to have flames.

A Pow Reckzo is a much more powerful version of a Reckzo.

A Reckzox is a mix between a Grox, and a Reckzo.

The Reckzo have 1 main pet, called a Reckatt. They resemble Earth cats in the body structure, head, eyes, ears, nose, tail etc., but they have Reckzo features too, such as an enlarged leg joint at the end, and the colors.

“I see great potential for this race should they pove their worth we would ally with them.”

- Macco of the Taxton Republic

“Lmao! They kinda just popped up, wonder what they like to do...”

“Hmmm... we have not heard of their race but there art skills interest us... we will see what relation bring in coming years.”

“They look like sushi to me! Not only was I one of Lordess Nix's best soldiers, I am the current best cook and ruler of the Zazane Empire!”

“They have great potential.”

“An interesting enough race, we might just abduct a few for study... or entertainment.”

“It is not often you find such friendly empires like us!”

“You really need to qualm up an inserg!”

“Allies and allies. That's all.”

The Reckzo Space Ship
Add a photo to this gallery

One of the Animals on the Reckzo planets

A Female Reckzo Citizen
Add a photo to this gallery

Rimeck, The Fifth And Final Reckzo Cell
Add a photo to this gallery

Reckzo, The Fifth And Last Reckzo Creature
Add a photo to this gallery

The Reckzo In A Tribal Outfit

The Reckzo In A Civilization Outfit

One Ripanna (left) and two Deltreiknoes, one at the back

One Reckisarodon, one Deltreiknoe and one Jaurilo at the back
Add a photo to this gallery

Retrieved from "https://spore.fandom.com/wiki/Creature:Reckzo?oldid=805985"
Community content is available under CC-BY-SA unless otherwise noted.