The Ransio are a species of bear-like creatures natives of the Outer Core of the Borealis Galaxy.

The Ransio are a species hailing from planet Kajusa, at the Outer Core of Borealis. Having a strong sense of cooperation since before they united their government, they achieved space travel about 10,000 years ago, being one of the oldest races to colonize other worlds around the Outer Core. Their nation, the Ransio Empire, would grow to become a regional power as well as a protector of the other, smaller empires of the region, who were all under the oppression of space pirates such as the Empire of Vijaha. During the First Borealis Galactic War, the Ransio pledged allegiance to the Zoles Imperium and allied with the Polar Crystal Alliance against the forces of the Wranploer Legion, and centuries later during the Great Purging, the Ransio suffered heavy losses when their territory was attacked by the Borealis Grox Empire. As of the Ice Age, the Ransio are now members of the Polar Crystal Alliance and are among the most important representatives of the Outer Core in the galaxy.

The Ransio are large creatures who appear as humanoid bears. Like terran bears, they are bulky, strong carnivores with long snouts and shaggy hair, which in the Ransio's race appears blue with red and black stripes. They can walk both on all fours and on their legs, and when standing upright can get to an average of two and a half meters tall. The Ransio have sexual dimorphism, with females having a lighter fur tone than males and slightly being larger in size.

The Ransio are often seen as one of the most noble and respectful species of the Borealis Galaxy. Their culture is centered around the idea that all Ransio are connected on a spiritual level and as such, each individual is part of one large organism which makes up the whole Ransio race. Deeply spiritual, the Ransio are known for being polite, even during battle, though they are also known to be extremely fierce and sometimes even violent if their kin are under threat. Because all Ransio see each other as kin, bringing harm to one individual will cause all other Ransio in the vicinity to retaliate.

The Ransio are among Borealis' most physically impressive species, having enough strength in one arm to knock a Zoles into the ground with a single arm swipe despite their size differences. They have exceptionally sharp claws which can shred their enemies to pieces, and in combat, a Ransio will often attempt to swipe at the enemy's head to decapitate them. Their robust build makes them resistant to damage, though they are slow moving and cannot run when standing on two legs, causing them to have difficulty fighting more agile targets. 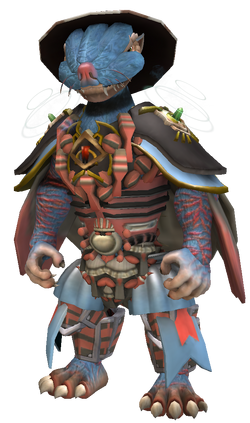 “I was chosen by the Council of Lances for diplomacy. I am honoured by this opportunity.”

Gavikrag Cuchog is the diplomat representing the Ransio Empire in the Polar Crystal Alliance. Most known around his empire as as "Quartz Lance", Gavikrag is a very high-ranking commander of the Ransio, but still accepted the rank of diplomat when appointed to by his empire. Gavikrag is a very honoured man with a thirst for combat. As expected from the Ransio's "Lance" rank members, Gavikrag is an extremely powerful melee-range fighter. His efforts in the Alliance include better hand-to-hand combat for its soldiers and the inclusion of Ransio troopers in its front lines. 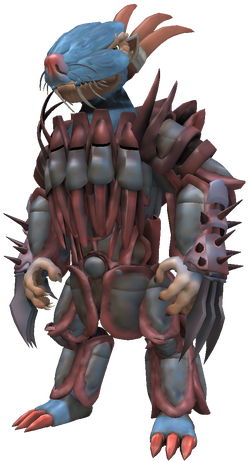 “I dedicate my power to the protection of those the Alliance holds dear.”

Ulsahar is the sixth member of the Penumbra Unit and its oldest Ransio member. Before joining the Unit, he served as the commander of the Great Silver Lance, the Ransio Empire's topmost warriors, and he was given the chance of being a Penumbran not too long after Vekaron himself, an honour he was more than glad to receive with the support of his companions. The old Ransio warrior commands over the ship known as Lance of Twilight and has numerous Silver Lance apprentices as his crewmates. Ulsahar, like all Ransio, has a strong sense of honour and community, and he is quick to come to the aid of the weak. He fights through the use of high advanced bladed knuckles, which combined with his great strength allow him to deal massive damage to his opponents. Ulsahar remains highly regarded by his race and seen as an example for the Ransio Empire's novice warriors. 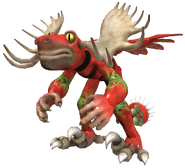 First model of the Ransio