Hostile to none Rambo or non Rambo Allies

The Rambo Zombilia are a mysterious kind of Ramboidae, often referred as Zombified creatures who are seen as scary and creepy, the Zombilia in fact play an important yet mostly unseen role witin Rambo Nation. 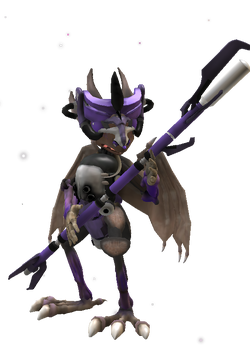 Rambo Zombilia, also called the Nauglazcm are the natives of the lava planet Ramghatulk, A feared member of the Ramboidaea species, the Zombilia, like their name suggusts are considered none alive. One of their abilities, aside from their wings for flight, the Zombilia capable of feeding off any social and happy emotions, some say they still their hunger with those feelings.

The Nauglazcm are capable of flying, but are physically very weak and skinny, on the other hand, they are very hard to kill due to their zombie like state and often stand straight up after knocking them down. Their abilities to feed upon happy emotions and thought to demorilise their enemies, made the Zombilia perfect prison wardens and guards, as well as interrogators.

Though the Zombilia are a member species of Rambo Nation, the Zombilia use their own guard to oversee the prison, as most other species and the clone troopers cannot stand against the hot temperatures at Ramghatulk for long periods of time. The Zombilia guards wear light armor, shock staffs to keep trouble makers and prisoners in line. The Zombilia guards are known as the purple guard, and are one of the most feared guards and law enforcers within the Quadrant Galaxies due to their skills and natural Zombilia abilities.

The Zombilia citizens live in houses, though they refer to it as nests that stand above the ground for protection against possible lava floods. Zombilia by nature are curious creatures, and though often feared by others the Zombilia are actually very social creatures who enjoy daily life things like relaxing, going to the saloon and enjoying television and art.

Not much is known of the history of the Nauglazcm, only that they lived on Ramghatulk a long time, flying above the lava and living in the spare rock formations found around the planet. However, when the Serindia stumbled upon the planet by sheer luck, they met with the Nauglazcm. Hostile as they were against the Noble Alliance members who were with them, they did not attack the Serindia and even managed to speak with them in Ancient Rambo Language.

Honored by this, they allies the Nauglazcm and they became the protecters and guardians of the Ramghatulkiage Orbital Prison, where they interrogated the prisoners and managed to even have the strongest prisoners in a state of mind, that they would tell anyone what they wanted.

During the Great Cyrannus War the Confederacy of Allied Systems launched an attack at Ramghatulk and managed to free various prisoners, during the assault the defense fleet was obliberated and many building were damaged during the short invasion. After the Confederate forces freed the prisoners they left the planet. The attack caused a great mistrust by the Zimbilia to citizens from Cyrannus. 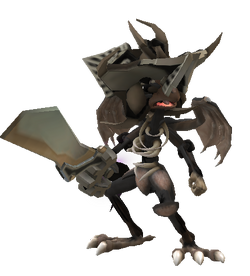 Ram'Gwalrorir was the Lord Ambassador of the colonies of Rambo Nation in the Ramvelkys Galaxy before they were abandoned, ruthless and scary looking, he is actually one of the only Rambo Zombilia whom is pretty friendly, although he is fiercly protective of his colonies and the rights of the Rambo.

Not much is known of Ram'Gwalrori, only that he is born over 528 years ago and is seen as the unofficial leader of the Rambo Zombilia, upon the introduction of the Lady and Lord Ambassador System he was given this position, simply because he asked it to the Empress. He wanted the Zombilia to recieve a more prominent role in the Rambo Nation society, showing them the Zombilia were not mindless creatures.

The Empress agreed and gave him the new colonies in the Ramvelkys Galaxy to oversee, proudly he went to there and surprisingly, he became quite populair to the Rambo's there though returned to the Quadrants when the Rambo were forced to abandon the colonies. He then became the senator of the Badlands sector. He is also a great diplomat, however when neccessary he doesn't shy away to use more aggressive negotiations. When Ramashe ordered to attack Yudumarth and declare war on the Confederacy, he agreed with it and contacted Ramghatulk to expand there prison capability. When in 05 AQF in the sixth month the United Republic of Cyrannus was reformed in the Galactic Empire of Cyrannus, an emergency session was held to inform the entire senate. Ram'Gwalrorir remained silent during the session, unsure what to do. When in 01 NE the Empress was forced to sign the Concordat- Ram'Gwalrorir was surprised but decided not to rebel against the person he swore loyalty to. When in 02 NE the senate put a vote on the table to produce Rambo vessels again, he voted in favor for the production.

In the fourth month of 06 AQF/03 NE, Ram'Gwalrorir was present when proconsul Apollo of the New Cyrannian Republic made a pledge for an alliance of old between the Rambo and the New Cyrannian Republic. Being bored, and not at all interessted in these kind of political debates he voted in favor to consider the URC-Rambo "sister-state" alliance to be still in tact. Afterwards he left for Ramghatulk again. He died in 08 AQF, during events of the Fury of Galvarus as he was on one of the three moons of the Rambo Capital at that time.

“Better keep them as your friends!”