The Blue female Ramboidae are a member of the Ramboidae. Known for their attractive appearances (-at least for other Ramboidae) and their bold and exotic nature. The Pantorilisea are natives of the Rambo Capital and live in harmony with their other natives, the Rambo Serindia.

The Pantorilisea are valauble members of the Nation, and one of the first who joined it.

The Rambo Pantorilisea are a Rambo Species which only exists out of females. They are beautiful examples and they mostly live inside mountain Cities on Icy planets, because they like the cold better then the warm, which most of the other Rambo Species like.

The Pantorilisea have feminene appearances and sometimes use this to their advance. They are blue colored and have two large wings which they use to fly. They are physically weak, but do have great knowledge of how the nature on polar enviroments work and are also pretty clever.

According to the records of the Pantorilisea city of Pantorilis they came into excistence around 20.000 BQF years ago.

Over time the male side of the Pantorilisea was wiped out (or so the female Panotrilisea believe) and females were the only one that survived the coldness. They soon settled themselves near the only mountains on the planet and began building their structures and above all thing, to be safe against the snow storm they began digging in the rocks to construct a complex structure that over the years turned out to be a city underneath and inside the mountain.

When the Serindia arrived at Pantorilis (the City) they were pleased and happy to know they were not alone on the planet, as they lived for a long time in isolation, high inside the cold mountains.

After a big party it turned out that Pantorilis City was rich on white spice, even though of the harsh and cold climate in the mountains- the city became one of the most importants mining and spice place on the capital, which came under heavy guard of Rambo Nation.

After the Pantorilis learned most of the history of the Serindia, they decided to join Rambo Nation and became full members of the Nation. The Pantorilisea are most seen on colder climate planets after they joined the Serindia into forming Rambo Nation, they were finally able to colonise other planets in the Galaxy. They can also be found at the Capital Regions where they act as models, since the Rambo consider them the most beautiful creatures of all.

When the Golden Time (429 BQF - 280 BQF) arrived for Rambo Nation, some of the Pantorilisea joined the Rambo Acadamy and became Captains on Rambo Ships. The most famous became Captain Ramuchi, the Captain of the USS Prometheus (Second Galactic War (0BQF) era). Another famous Pantorilisea is Princess Ramtilsae, the niece of Empress Ramashe who is often involved in daring adventures (where she has to be saved multiply time due to her curiousity).

Over the remaining history of Rambo Nation the Pantorilisea became important members, always supporting of the Nation and aiding the Navy and Militairy during daring conflicts like the Second Galactic War, Intergalactic War and the Great Cyrannus War. However in 05 AQF/01 NE the Rambo were forced to singn the Concordate which turned Rambo Nation into a "protectrate" of the Empire. Though the Pantorilisea as whole remain loyal to the Empress, they feared that with the Empire in rule the Pantorilisea would become a new prey for slavers as they noticed that Grand Mandator Garlboz was slowly weakening the Rambo defenses. 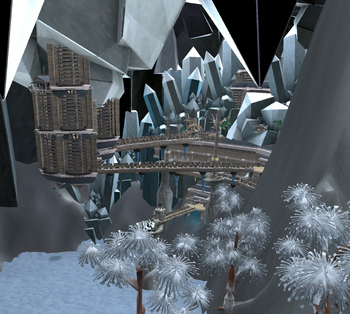 The home city of the Pantorilisea is known as Pantorilis, but also known as the Northen Pearl or the Ice-cave. Build in ancient times, Panorilis became a magnificent and unique city found at the Rambo Capital. The city was constructed somewhere before 10.000 BQF by the Pantorilisea and slowly expanded to her current sight. The Pantorilisea build their city underneath a massive polar cap in the north of the planet, where from the sky is was invisible for their enemies. Build in a massive diamon cave, with a lone entrance above and a massive openening on te other sight, Pantorilis is invisible for enemy eyes.

During her history the city has escaped the planetary wars that plagued the early Serindia factions. Over time, the Pantorilisea became experts in creating diamonds and pearl, found deep within their cities and hidden underneath the ice. Around 448 BQF the Pantorilisea med with their Ramboidae brethren and sisters, the Serindia. Knowing they were not alone at the planet, the Pantorilisea joined the young Rambo Nation and as such Pantorilis became a Rambo Nation city as well.

During the Second Galactic War escaped an attack but later on, during the Intergalactic War the city was invaded by Cogsangui commander known as Thel'Vicliquam. He discovered an ancient Atlantica portal beneath their city and managed to activate it. Due to some reasons beyond the Pantorilisea's knowledge the portal vanished and Pantorilis returned to her peaceful state.

Princess Ramtilsae, the niece of Ramashe and Regent of the Nation 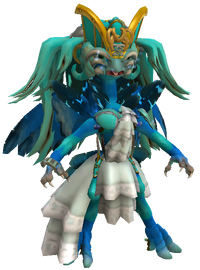 Born 22 years ago at the Rambo Capitol Planet of Dinoman82, she soon rose as a great diplomat and learned a lot from recent events and alliances with the URC, DCP and other Empires.

Due to her studies to diplomatic missions and even improving the First Contact Protocol she was promoted by Empress Ramashe to Lady Ambassador upon the introduction of that system. This made her very proud and made her a little overconfidence (she even dares to oppose the DCP Emperor when she doesn't agrees with his decisions). upon her promotion she became the prime contact to the DCP, and requests are often played through her to the Empress herself, as it goes a lot faster than contacting her from deep space. None the less, she is honest and fair and the people of the Colonie of Eris and the others colonies in the Milky Way lover her and she is a welcome sight on many an Empire in the Milky Way. Upon her settling down to Eris, she changed her cloathing as Eris has a differant culture than most Rambo Nation colonies.

Lately she is troubled by recent events, as the many conflicts and the recenlty V2 fleet diminished Deep Space Colonies protection. Upon the expansion of the Rambo Senate she became a Senator for Eris and now vows to increase security of the colonie, though her influance has diminished. When the DCP became involved in the Second War of the Black Fog she was informed of it by a report from an officer who noticed increased activity. She grew worried, but did not inform Rambo Command. When the Senate declared war on the Confederacy, she was not present.

Later on in 05 AQF her beloved planet Eris fell to a surprise Salsetthe attack and with their fleet destroyed, the survivors were evacuated by the Salsetthe to the nearest Rambo Nation colony. Returning back to Quadrant 82 and took the people of Eris to the newly discovered former Atlantica bastion Atlethena Metru. There she settled herself and her people to start over again. When in 05 AQF in the sixth month the United Republic of Cyrannus was reformed in the Galactic Empire of Cyrannus, an emergency session was held to inform the entire senate. Ram'Eriathine was impressed by the event. She remained silent during the session, though in her mind she made preparations to defend her sector if needed.

To her surprise, an anomaly placed her beloved colony, Eris back in the Quadrants as it was before it's destruction. Delighted it became the new capital of the Deep Space Sector. Ram'Eriathine was pleased with the successes of Kya and Captain Rambo which ensured peace with various races of Quadrant 21, even an uneasy peace with the hostile Icolians.

Ram'Eriathine looked in awe when Rambo Nation was forced to sign the Concordat which made Rambo Nation a protectrate of the Empire. Not willing to follow Empire rules she still decided to follow the Empress, but gave no information about Quadrant 21 to the Empire nor did she welcome them when they arrived.

In 02 NE she voted in favor of producing Rambo ships again, going in against the order of Garlboz she wanted to see conflict against the Empire as fast as possible. Sadly the Rambo still remained under protectrate and little could be done against it. Yet there was a relative peace when in the fourth month of 02 NE the Secoolians suddenly contacted the Rambo in order to meet them. Ram'Eriathine was well aware the Secoolian searched for information about the sudden attacks from the Quadrantia Grox. She agreed and together with captains Apanoida and Rambo she met a delegations at the Quadrant 21 space station. The Secoolian demanded information, but Ram'Eriathine explained she could not give that without the permission of the Rambo Senate.

In the fourth month of 06 AQF/03 NE, Ram'Eriathine was present when proconsul Apollo of the New Cyrannian Republic made a pledge for an alliance of old between the Rambo and the New Republic. She eventually gave her vote in favor of considering the "sister-state" alliance still intact. Afterwards she returned to the Deep Space Colonial Sector.

The Pantorilisea are not a warrior race, but due to there magic abilities and the constant hammering attacks on Rambo Nation the Pantoriliea created a special devision for service in the Rambo Nation Military under command of the Judge Magisters. They named this devision the Sword Mistress, also known as the Rambo Mages.

A Rambo Pantorilisea Sword mistress are Pantorilisea whom are experts at sword battles, also carrying a mechanical claw, they can inflict heavy damage. Beware, they are often called the Rambo Mages, due to there magic abilities and stealth.

There magic abilities contains the possibility of mental control, summoning bees and the ability to freeze opponants. They are also experts in seducing male species.

The Pantorilisea have various outfits and appearances. See the picture.

From left to right: