The Rambo Goldianius are a rare specimen of the Rambo family, they have 4 wings, and are have golden colored feathers. They are known to be the best warriors of Rambo Nation and live in temples where they honor the Rambo Gods of Rambo Nation. They were native to the planet known as Pauvenris before one of the Xhodocto Gods destroyed their beloved planet and killed many of the already dwindeling Goldianius numbers. None the less they remained members of the Nation and began to live on other planets within the Nation. As members of the Ramboidae family, they are one of the most respected and wisest among them. The events of the Fury of Galvarus killed their senator.

According to the Goldianius own records of history, they originated from the planet of Dinoman82 where they lived most of their early lives in peace. But as the Ultimate God fell to his slumber by the traitor- Artmyris, the Atlantica God known as Horus took some of the Rambo Serindia away from the planet and gave them a new home, the planet of Pauvenris in the Braafrena System.

Here they lived almost an eternity in peace, where they build their temple fortress, in which the Goldianius live and train their ways in handeling the sword and honoring the Rambo Gods.

When the Serindia arrived at Pauvenris onboard on of their NX-classes, the Goldianius realised they found their ancient brothers and sisters again. They quickly joined them, and so the Rambo Goldianius became part of Rambo Nation.

The Goldianius dislike the aggressive nature of their othe relatives, the Aviadactyl but decided to remain out of the short internal conflict between the Serindia and the Aviadactyl. As becoming part of Rambo Nation, the Goldianius were given a position in the Rambo Senate and soon were allowed to represent the entire Inner Colonial Sector.

However, although some of them joined the Space Fleet, most of them just went along with their former lives. Spending their days in their temples and training the sword skills and expanding their knowledge. As some years passed by, the Goldianius became the Center of the Riligious Section of Rambo Nation and were seen as the guardians of the temples and bringers of the Rambo Religion of the Rambo Gods.

Sadly, near the end of the Second Galactic War (0 BQF) the Goldianius were in trouble, as they were the most powerfull warriors of Rambo Nation they were often active at the front lines- but due to revealing of the Rambo Imperialea (who were far stronger) many were slaughtered and the Goldianius were already in low number and decided not to be active at the front lines anymore. Instead, they returned to guard duty or simply fled to there Rambo God temples, where they could recoved and prevent the extinciton of the Goldianius.

Around 06 AQF/03 NE, two years after the signing of the Concordate that turned the Nation into a "protectrate" of the Empire- the numbers of the Goldianius seemed to grow in number once again. 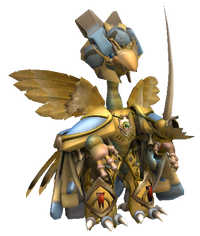 Ram'Thrandeal is a prophet and high follower of the Rambo Gods, as a Goldianius he is very strong and is a long time friend of the Royal Family. Due to this, he recieved the Lord Ambassador title of the Inner Regions, which boosted his arrogance even more.

He is the Lord Ambassador of the Inner Colonies and has a great deal of influence within the Rambo Senate, and as a Goldianius he is very strong and his voice is listened to. The other Ambassadors respect him a lot, but they dislike his arrogance. However, he is very loyal to Rambo Nation and good for the people and is a favorite sight among the citizens of Rambo Nation. He can often be found at Rambo Prime, where he argues with the local Ambassador about lowering taxes on transports. Though upon the expansion of the Senate which have now more to say, he became a Senator of the Rambo Senate. He now represents the Moon of Anummiae, the second moon of the Rambo Capitol. He kept his title of Lord.

It is said that he is the most powerfull Goldianius in excitense and was a former Prophet whom went to politics. When Chuinaylia wanted to delay the vote on attacking the Confederacy, he agreed with her but was later shocked by the Empress her decision to attack Yadumarth and with it the declaration of war on the Confederacy. Ram'Thrandeal was pleased with the war efforts and events, as it made the inner colonies richer and heavier defended than before the war.

In the fifth month of the year 04 AQF, three weeks after the fall of Karzhamahri Nui, Ram'Thrandeal travelled to Nertharia in secret. There he met with the Diva Bettie Governor for a secret meeting, together with holo transmission by Senator Aviataryal and Chancellor of the Crown Aleathria, the four of them discussed the new Typhon Class, a ship with the capability to push objects from the time continuum. When Aleathria approved, the ship could now travel in secret to Nertharia to install internal and external weaponry and defensive systems. Something Ram'Thrandeal would take care off, so no civilian crafts would discover the new class.

Afterwards he left Nertharia and returned to his office. He remained to oversee the inner colonies from his office. When in 05 AQF in the sixth month the United Republic of Cyrannus was reformed in the Galactic Empire of Cyrannus, an emergency session was held to inform the entire senate. Ram'Thrandeal himself raised his voice to declare the Empire as enemies and capture all URC citizens present in Rambo Nation (would be almost be impossible) and also raised his voice about his doubts at senator Adar his allegiance. Later on the senator Lord was summoned by the Rambo Founder for a special meeting. At the meeting Admiral Ramaxar and senator Chuinaylia were also present. During the meeting the Founder brought up to vote against the closing of the Quadrantia-Cyrannus wormhole, but the admiral left in anger, refusing to listen as he was in for such a drastic action. He remained with the founder and the Chinawkya senator the entire day, given lunch, thea time and diner by the Founder and his servants. Near the end of the day he left, confident of swaying the senate to stop the closing as it would effect Rambo Nation her economy and the Nation would loose any hopes of finding remnants of the URC.

When Empress Ramashe was forced to sign the Concordat, turning Rambo Nation into a protectrate of the Empire Ram'Thrandeal felt lost and confused. Unsure what to do he followed his Empress, though inforced his colonies under his watch with defense weapons. In 02 NE Ram'Thrandeal gave his vote in favor of starting the production of Rambo ships again, though it went against the Grand Mandator his wishes- Ram'Thrandeal didn't care.

In the fourth month of 06 AQF/03 NE, Ram'Thrandeal was present when proconsul Apollo of the New Cyrannian Republic made a pledge for an alliance of old between the Rambo and the New Republic. He at once demanded caution but eventually gave his vote in favor of considering the "sister-state" alliance between the Rambo and the URC (-and now it's successor the NCR) still intact- though demanded that the Rambo would take a neutral stance in the case of a conflict between the New Republic and the Galactic Empire of Cyrannus or the Hutter Kingdom. During the twelfth month he was present with a few senators in a meeting with Empress Ramashe, once there he confessed his concerns about the outbreak of the Gigaquadrantic Conflicts and the throne without a heir. During the conversation, Ramashe assured the senators present that she was capable of finding a mate herself, something Ram'Thrandeal was not entirely convinced of. He died in 08 AQF, during events of the Fury of Galvarus.

The Goldianius look differant than other Rambo, and mostly by the fact they have a yellow/golden feathers and look.

They also posses four wings and they wear Golden Armor to protect them. They do not use modern weapons, instead they fight with a spear, made of bones from creatures to defend themselves. They have specialized in this so good, that they can reflect bullets and blaster shots (of course if they see them coming).

They are considered very noble, proud and honest, but also the arrogant Rambo of the Nation.

The Temple of the Goldianius are a single tower surrounded by quarters to sleep, live, trains, weapon armories etc.

The Temples are always build near mountains and near jungles or trees as the Goldianius believe they also have to learn the ways of nature to survive. Most of this kind of temples were found all over Pauvenris and many tourists or religious individuals visited the temples. They were once considered the center of the Rambo Religion. They were known by differant names, like Temple of Rambo while others called it the Church of Rambo.

The ordinary Goldianius are part of Rambo Nation, but are not part of the military and only protect the temples and the Founder's Home, although over the course of years, the Goldianius formed the High Guardian Elites, who came under the rule of the Judge Magisters and the Rambo military. They did this after seeing the terrible strength of both the Xhodocto and the Civatrons.

The Elite Guard are even better then the Serindia Royal Guard or the normal Goldianius.

Although they mostly resemble the ordinary Goldianius, the Elite Guard have in addition a large shield and differant head armor. Rumors have it that the Godlianius Elites are equall in strength with a Civatron and a Xhodocot, but this has not been tested out yet.

They are incredible fast due to there four wings and can take a lot of damage. There shields can give a terrible force and could kill a Lizardian Elite with one blow.

However the Elite Guard is not that big yet, and it in the beginning fase.