The Rambo Aviadactyl are the smalles and most agressive of the Rambo Species, even more than the Rambulans. However they have managed to ally there Rambo Brothers and Sister and live in peace within Rambo Nation. Over time, due to them living on the moon of Rowar, a moon of the Rambo Capital they soon found themselves as the prime and main shipbuilders and the Shipyards of Rowar became the main shipyards of the entire Nation, effictively making the Aviadactyl one of the most important and richest species of the entire Nation.

During the Tertius Bellum in 08 AQF, the events of the Fury of Galvarus destroyed their homeplanet and most of their kin. Brought low by the events, they now face extinction.

Not much is known of the early history or why they were encountered on the moon of Rowar, the moon of Planet Dinoman82. It is known that they evolved very differantly compared to other Ramboidae, due to the moon' harsh climate they grew greater wings and changed physically and visually.

Arriving of the Serindia (around 448 BQF)

The Serindia arrived during their early days of space travel with a Nx-class ship. At first they were surprised to meet creatures who resembled themselves so much. But they managed to regocnize eachother as brothers and sisters. However the Aviadactyl's hostile and agressive nature proved to become a problem soon.

Conflict with the Serindia

Soon after the arrival of the Serindia, the Aviadactyls had a fight which almost resulted in civil war. It started with an accident, while an Aviadactyl entered a Space Ship it accidentalley chrashed at at the Rambo terraforming project. The Serindia, seeing this as a threat retaliated with force and destroyed the nearest village of the Aviadactyls. When the two sides were standing face to face the Rambo Emperor of that time arrived and begged for peace which both sides luckily accepted and soon proved to be very promising for the entire Nation.

After the conflict was laid down and a few years later, when the Aviadactyls were allowed to serve on Space Ships or commandeer them, the Aviadactyls joined Rambo Nation as full members. As such the Aviadactyls and the other members of Rambo Nation began living in peace within the Nation. Although the Aviadactyls are still seen as trouble makers and mostly work at the shipyards, since they are experts at crafting, building and creating Space Ships. Over time, as the shipyards became the richest and one of the most important and influential companies of the entire Nation, they were allowed their own senator and as ship production continued, the yards expanded greatly.

For most of the years, there was no trouble at the yards and the Aviadactyl continued their daily lives. However in 0 BQF, during the Second Galactic War many of the great designers were kidnapped or killed by the Imperial Alliance whom had hired the Syndicate. This meant that during the war many of the ships had to await repairs (or recieved none at all) and that security measures were increased, this in dislike with the Aviadactyl.

Upon the forming of the Quadrantia Federation, one of the most known Aviadactyl- who was a Senator in the Ramboidae Senate was promoted. He became the representive of Rambo Nation in the Quadrantia Council, in which he took great pride. He is one of the only ones who seems to get along with the Xiaan Ambassador. After the Second Galactic War unofficially ended, the Aviadactyl time was growing short, as many of the Space Ships returned to the Rowar Orbital Shipyard for repairs. Some of them even worked overtimes and the fabrics were already running low on personel and supplies. This meant a drastic rule, all experimental and new constructed ships programs were put on hold. Only the USS Capricaerón, a Merced Class was launched in active service again after it was damaged during the 2nd Battle of the Rambo Capitol.

All other ship classes, like the Centaur, Excelsior, Galaxy Class etc were repaired first and updated before the secret and new programs were allowed to contintue. After the war and when things went normal again the yards and Aviadactyl continued their daily lives. Even after the signing of the Concordate- which turned the Nation in a "protectrate" of the Empire the Aviadactyl continued their daily lives of repairing and building ships, whether it were Rambo or Imperial ships it did not matter as long as they got paid the Aviadactyl weren't complaining. 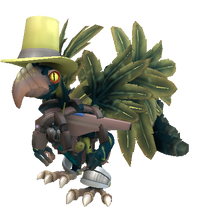 The Rambo Aviadactyl Senator, known as Aviaratyal is a noble and honest senator of Rambo Nation and the Shipyards of Rowar with a great deal of influance. He is a former Senator of the Quadrantia Federation and a former representative for the Cyrandia Alliance, making him a busy person with a lot of influance and contacts. He is a fanatic person- who favors sending sending in troops and battle fleets against the enemies of Rambo Nation. He has vowed that Quadrantia operations will always involve Rambo Nation ships, prefferly they are leading in the missions. He is a firm believer of the supremecy of the Shipyards of Rowar and is a full supporter of the expansion of the Rambo Nation fleet and military.

He seems to get a long fine with the Xiaan Representive and is a trusted advisor of Empress Ramashe. He is also a good friend of Aur'Lumniassa who went missing during the Great Cyrannus War. He was forced to step down as representative of Rambo Nation for the Cyrandia Alliance, as he could not live with the tensions with Cyroenia shipyards. He then became the Senator of Rowar, his own shipyards. When Senator Lord Adar wanted to declare war on the Confederacy, he turned to Aviadactyl for his vote, but he neglected as Aviaratyal din't want to bring the subject to the Senate as they refused before. When Ramashe ordered to attack Yadumarth- he gave his vote to declare war on the Confederacy and he became pleased with the war efforts, as the ships needing repairs after battle meant more profit and income for the shipyards. This made the shipyards even more wealthier then before, yet the contract with Rambo Command also had a turning point in the 5th month of the Quadrantia Disorder. When Karzhamahri-Nui had fallen into Confederacy hands, Rambo Command ordered Aviaratyal to launch the New Orleans Class V2, earlier on schedule as planned. At first he refused, but had to comply as most Galaxy Classes and Phoenix Classes (most modern ship classes) were battling elsewhere. As such he gave the green light to launch the New Orleans Class V2, though the class would still suffer teethings and was later on forced to be withdrawn due to this teethings.

During the fifht month of the Quadrantia Disorder Aviaratyal closed his office, a rarity for a secret meeting with Senator Lord Ram'Thrandeal, the Diva Bettie Governor and Chancellor of the Crown Aleathria. The Chancellor and himself used a secure holo transmission frequency, as they were not able to meet the Senator Lord and the Governor in person. The secret meeting was about the new Rambo Nation Typhon Class, a 1550 meter long ship with the ability to push objects from the time continuum. Almost finished, it only needs internal and external weapons and defense, which the Diva Bettie would intergrate. Ram'Thrandeal agreed to provide a cover and Aleahtria too. After the transmission Aviaratyal made preperations for the Typhon Class to travel to Nertharia. For the rest of the war Aviaratyal remained at Rowar, until the 6th month of 05 AQF.

The United Republic of Cyrannus was reformed in the Galactic Empire of Cyrannus, and an emergency session was held to inform the entire senate. Aviaratyal was furious, how dared former allies to turn on the Nation- they fought side by side and died for eachother. He raised his voice to declare war on this Empire and wipe it out from excistence with the aid of the rest of the Cyrandia Alliance. He was also one of the senators who began doubting senator Adar his allegiance.

Shorlty after the forming of the Empire, Aviaratyal stood against senator Chuinaylia and her Apationagtus friend, a representative of the URC colonies in Quadrant 82. He claimed they were still loyal to the Cyrandia Alliance though Aviaratyal and his aid- the Commodore didn't believe it. During the discussion insults were made to the URC representative when suddenly an order of the Empress came in, all URC/CyrEmp ships were considered hostile and were not welcome anymore within Rambo space. As such the two were happy, all URC were now enemies!

Sadly in 01 NE the Empire eventually arrived at the Rambo Capital and started an invasion. Tyring to aid the fleet Aviaratyal ordered all ships in docks, whether they were damaged or not to aid the fleet and also ordered the Girdo droners to do the same. Sadly the droners left and the Empire brought the Empress to her knees, surrendering the Nation to ensure peace and prevent onslaught. As Aviaratyal recieved orders by the new Grand Mandator of Quadrant 82, Garlboz- he grew furious as the Mandator ordered the stop of all new production of Rambo ships.

The yards were only allowed to finish repairs or ships that were already under construction. When Garlboz later met Aviaratyal to enlighten the senator on his decision, Aviaratyal accepted the order, as his yards now had to produce two new ships for Garlboz his own navy in Quadrant 82. Happy his people had new work he began making preperations, already forgetting the Empire actually conquered Rambo Nation instead of making her a "protectrate".

This act was frowned upon by the rest of the Rambo Senate, as they held secret meetings to see if they could reverse the order of the Grand Mandator. Eventually they found a way, and with approval of the Empress, senator Chuinaylia- flanked by Or-Ana and Lord Ram'Lendilia handed over the Royal parchment. The parchment was signed with the crest of the Royal Family and described an order to produce Rambo ships again. First Aviaratyal struggled against this order, but when Chuinaylia questioned his loyalty he claimed he was loyal to the Royal Crown only and left to the shipyards to start the production of Rambo ships again.

In 03 NE/06 AQF Aviaratyal was present when proconsul Apollo of the New Cyrannian Republic spoke to the Rambo Senate. During the debate, Aviaratyal seemed to support senator Chuinaylia as the Shipyards of Rowar already recieved orders to build exploration vessels for the New Republic. Eventually the senate decided that the "sister state" alliance was still intact, albeit with the condition that the Rambo took a neutral stance in the event of a possible conflict between the New Republic and the Galactic Empire of Cyrannus. He died in 08 AQF, during events of the Fury of Galvarus.