The Rambo Ancientia or Numanoriuniëaare a member of the Ramboidae genus species, though instead like their distant cousins, the Rambo Ancientia lack wings and as such do not have the ability to fly. Once native to Qaudrant 21, an event they call the "Great Dissapearance" resulted in the destruction of the Ancientia Kingdom, as all Ancientia within Quadrant 21 were relocated by the Atlantica. Those who remained, wandering in the other quadrants refused to return Q21 and instead settled themselves at the ruined colony Aegimi, adopting their new homeworld and joining Rambo Nation. 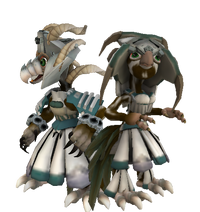 The Rambo Ancientia, also known as the Numanoriuniëa are Hexavipsida, member of the Ramboidae genus species. The brown/white colored wingless birds were once native to Quadrant 21, a member of the Ancientia Kingdom. An highly advanced culture, those Ancientia that at the time of the "Great Dissapearance" were outside of Quadrant 21, saw their beloved Kingdom crumble and their entire kin gone. Left without a home, the Ancientia refused to enter Quadrant 21 in fears of dissapearing as well, and instead began living at Aegimi, a ruined colony of Rambo Nation and rebuild it. Keepign true to their traditions, they remained wearing their unique and decorated clothes and uniforms.

The Ancientia have their own space ships as well, those manning the vehicles and star ships are often referred to as the Star Crew and have wear uniforms to identify them. The Ancientia also have a distaste for hand carried weapons, and as such prefer the use of blades and knifes to defend themselves. The only weapons are installed at their space ships for obvious reasons. Most Ancientia warriors are so skilled in the use of swords, they can use it to reflect bullets and phaser bolts.

Claimed to be created by the Atlantica entity Horus, the Ancientia inhabited Quadrant 21, one of the five Quadrant Galaxies. Records are vague upon when the Rambo Ancientia reached space, but early records since 1250 BQF indicate they already explored nearby space, where they allied the Caizini and the Goraurien, though grew hostile with the Andormaru and the iconic Icolian. For years, the Ancientia grew to become the most advanced and cultural super power in Quadrant 21. Around 0 AQF, the Ancientia discovered a wormhole leading to the Cyrannus Galaxy where they made first contact with the United Republic of Cyrannus and later befriended Rambo Nation as well, discovering other Ramboidae species like the Rambo Serindia. Sadly, shorlty after the conclusion of the Intergalactic War, a war they fought in against the might of the First Cognatus Empire; the Ancientia Kingdom came to an end when entire Ancientia population of Quadrant 21 vanished. in a bright light.

After the loss of their Kingdom, the remaining Ancientia sought refuge in the Quadrant Galaxies. Shunned by empires like the Hutter Kingdom and the Regellis Star Empire, the Ancientia found friendship and aid at Rambo Nation and their allies the United Republic of Cyrannus. Refusing to spread out in the Cyrandia Cluster due to their low numbers (only 552 Ancientia remained) they decided to settle themselves and rebuild their population and traditions. Rambo Nation offered them a home in one of the many cities at the Rambo Capital, but the Ancientia set their eyes as the ruined Aegimi, a planet once occupied by the Trivoid before being driven off. While there, the Ancientia under guidance of a Serindia Governor and the Ancientia mage Ramthas Coldbreath rebuild Frostkeep and began building their own unique houses. After disovering the Karpraid fishes, and their delicious taste, Frostkeep gained itself an harbour with fishing boats and became the main supplier for Rambo Nation for Salted Karpraid Dish.

Under command of captain Anciaddwia the remaining Ancientia space ship were re-formed in a defense and transport fleet for Aegimi.

With the "Great Dissapearance", the once great advanced fleet of the Ancientia was gone, with few remaining vessels, shuttles and fighters the fleet re-organised under command of captain Anciaddwia, now a defense fleet of Aegimi and ships turned into escorts and transport freighters. Their main class, the Foray-Class is both used as an escort and a transport vessel, both used in battle and as exploration vessel.

“An honorable and proud species, sad to see their advanced Kingdom suddenly dissapear and crubmle”

“They were worthy allies during the Intergalactic War and were on the way to becoming some of our closest allies. Their disappearance came as a great shock, though it is comforting to know that some yet remain.”